Teacher, Author and Nurse from Michigan 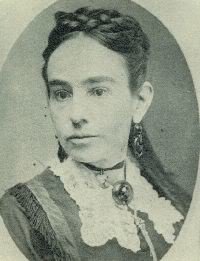 Julia Susan Wheelock volunteered as a nurse for the Michigan Soldier’s Relief Association. In newspaper accounts, she was referred to as The Florence Nightingale of Michigan. After the war, she worked as a clerk at the Treasury Department in Washington, DC.

Julia was born in Avon, Ohio, on October 7, 1833. When she was four, her father moved the family to Erie, Pennsylvania. Her father died when she was 11 years old, and her mother died when she was 21. Julia then moved to Michigan to be near her brothers, Orville and Chapin. In 1858, she entered Kalamazoo College, majoring in Latin and mathematics. After graduating, she began teaching.

In September 1861, Julia’s brother, Orville, enlisted in the Eighth Michigan Infantry. His unit fought in the Battle of Chantilly in September 1862. On September 10, 1862, Julia received word of her brother’s condition. She left her teaching job in Ionia, Michigan to be at his bedside.

Julia started a diary that day and wrote:

At 1/2 past 8 o’clock Tinie Stone called and wished to see me: I went to the door, when she informed me that brother Orville was seriously wounded the first day of Sept. in the battle near Centreville, that he lay several days on the field, had his left limb amputated – but was finally taken to a hospital in Alexandria, Va.

Anna, Orville’s wife, and her sister Sarah accompanied Julia on her journey to find her brother. They arrived two days later and began looking for Orville. Hope quickly turned to despair when they were told that Orville had died on September 9, and had been buried at the soldiers’ cemetery in Alexandria (now the Alexandria National Cemetery).

We saw a soldier’s funeral procession approaching – a scene I had never before witnessed, but one with which I was destined to become familiar. He is escorted to his final resting place by comrades with unfixed bayonets, and arms reversed, keeping time with their slow tread and solemn notes of the ‘Dead March.’

We all went out to Fairfax Seminary Hospital. This is a large hospital and will accommodate several hundred patients. It is situated in a delightful place, commanding a fine view of the country for miles around. The country, before the war, must have been beautiful; but now, so desolate! Fences gone, buildings in ruin, shrubbery destroyed, fields uncultivated – all showing the sad effects of desolating war.

A few days later, Anna and Sarah left for Michigan, but Julia stayed behind. During her search for Orville, she had met Elmina Brainard, a young Michigan woman who had volunteered to nurse the wounded. By the end of September, both women had been appointed visiting agents for the Michigan Soldier’s Relief Association.

The purpose of this organization was to provide food, clothing and other supplies to Michigan soldiers. Julia assisted the nurses, fed the soldiers, wrote letters home for those unable to do so for themselves and comforted the dying, with an emphasis on those from Michigan.

But Julia cared for all soldiers, without prejudice. She described a group of wounded soldiers in a stable near Belle Plain, Virginia: “Many of these were Rebels. I could not pass them by neglected. Though enemies, they were nevertheless helpless, suffering human beings.”

She worked twelve hours a day, then returned to her Alexandria boardinghouse and baked pies to take to the soldiers the following day. She fought to improve the conditions of the makeshift hospitals, which were often dirty and unsanitary. She was paid five dollars a week, funded with donations by the people of Michigan.

In time, Julia traveled to the Virginia battlefields. While nursing the wounded from the Battle of Spotsylvania Court House in May 1864, she wrote:

Oh, what scenes of suffering I have witnessed. I found many Michigan men without blankets, sometimes 50 or 60 in one room. Many who have just arrived from the front have had nothing to eat for three or four days – literally starving to death! Men were busy from early dawn until night burying the dead.

Two months later, Julia contracted typhoid fever and was sent home to recover. She returned to Washington on April 13, 1865, the day the capital celebrated the surrender of General Robert E. Lee‘s army at Appomattox.

Julia’s work with the Michigan Relief association ended in July 1865. She stayed in Washington and worked as a clerk at the Treasury Department until 1873, when she returned to Michigan.

On May 28, 1873, she married Porter C. Freeman of Middleville, Michigan. The couple had two sons, Frank Wheelock Freeman and Frederick Orville Freeman. Frank died at the young age of 14.

Julia wrote Boys in White, Experiences of a Hospital Agent in and Around Washington, which was published in 1870. It is based on the journal that she kept of her experiences during the Civil War, which is now part of the Civil War collection at Lincoln Memorial University in Harrogate, Tennessee.

In 1890, she was granted a pension of $12 a month for her service during the war. A document issued by the House of Representatives stated, “Julia Wheelock was a brave woman, a patriot in the highest sense of the term.”

She died on June 7, 1900, at the age of 66 and was buried next to her son Frank in the Hazelwood Cemetery in Springfield, Missouri.

In October 2002, Julia Wheelock Freeman was inducted into the Michigan Women’s Hall of Fame for her tireless efforts during the Civil War.