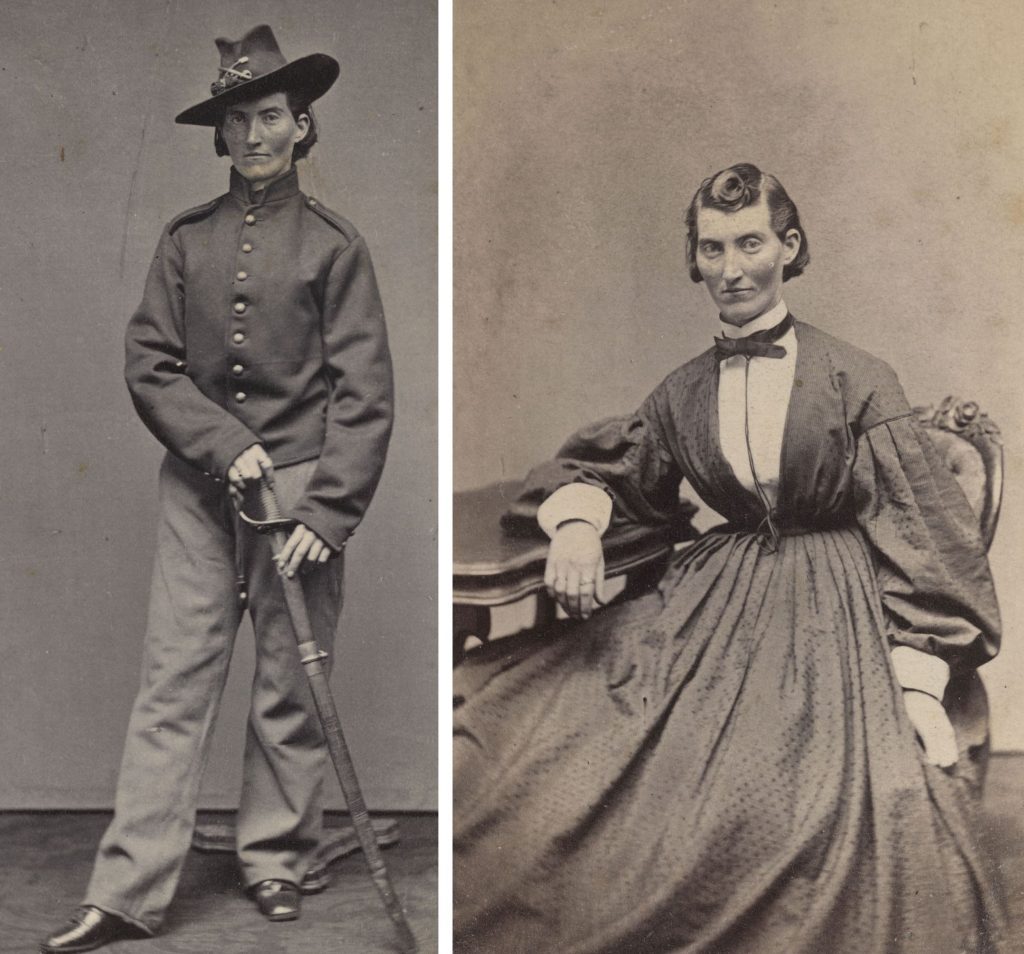 Women Soldiers in the Civil War

On September 17, 1862 at least four women fought at the Battle of Antietam. With more than 30,000 casualties, it was the single bloodiest day of the Civil War. At this bridge, Union troops under General Ambrose Burnside took heavy casualties.

Both the Union and Confederate armies forbade the enlistment of women. So women who wanted to serve disguised themselves as men and assumed masculine names. Because many of them successfully passed as men, it is impossible to know with any certainty how many women served in the Civil War. The estimate is somewhere between 400 and 1000. I think even the larger number might be an understatement.

Women who were determined to fight in the war cut their hair short, wore pants and shirts, bound their breasts, and learned to swear and walk like men. Achieving a male voice and coping with the lack of facial hair might seem at first glance to present greater difficulties, but the numerous underage boys in the military made it easier for females with boyish voices and little facial hair to go undetected.

When the war first began, it is written that most of the women enlisted in order to be close to their husbands, sweethearts or brothers. They probably didn’t think about the hardships they would encounter in camp, on the march and in battle. This was not an easy thing they chose to do. They were treated harshly, were accused of being insane, and sometimes disowned by their families.

In the early stages of the war, women soldiers were praised by the press. The escapades of cousins Mary and Mollie Bell were reported in the Richmond newspapers. The Bells, aliases Bob Martin and Tom Parker, were teenaged farm girls from Virginia, whose uncle had left them to join the Union army. The girls enlisted in a cavalry regiment under the command of Confederate General Jubal A. Early. With the help of their captain, the Bells served for two years before their gender was discovered.

Mary Owens enlisted in Company K, 9th Pennsylvania Cavalry, in order to be with her lover. She served 18 months under the assumed name of John Evans. She did not enlist in the same regiment but in one which belonged to the same division. It is said that the two saw each other often. Mary was discovered to be a woman after she was wounded in the arm. She returned to her home in Pennsylvania to a warm reception.

Frances Hook, aka Frank Martin, enlisted with her brother in Illinois. She was wounded at the Battle of Stones River, Tennessee, in December 1862. Her sex was discovered, and she was mustered out of the Union Army. She re-enlisted several times, as did other women soldiers who were discovered.

Sarah Emma Edmonds, a native of Canada, alias Franklin Thompson, enlisted in the Second Michigan Infantry in May 1861. Her regiment participated in the Peninsula Campaign and the battles of First Manassas, Fredericksburg, and Antietam. She deserted in April 1863 because she contracted malaria and feared that if she were hospitalized she would be found out.

A Sandusky Ohio newspaper reported in December 1864 that a baby was born to a female Confederate officer who was then imprisoned at Johnson’s Island in Lake Erie.

Mary Livermore, a member of the Sanitary Commission, was instrumental in discovering a female soldier in an Illinois regiment. Mary wrote:

One of the captains came to me and begged to know if I noticed anything peculiar in the appearance of one of the men, whom he indicated. It was evident at a glance that the ‘man’ was a young woman in male attire, and I said so.

The young woman was called out of the ranks, but begged the officer to allow her to remain and keep her disguise as she had enlisted with her husband’s company to be with him. She was escorted out of camp. That night she leaped into the Chicago River in an attempted suicide, but was rescued by a policeman.

The woman then said: ‘I have only my husband in all the world, and when he enlisted he promised me that I should go with him; and that was why I put on his clothes and enlisted in the same regiment. And go with him I will, in spite of everybody.’

In some areas of the country, women formed Home Guards in order to protect the homefront while the men and boys were gone. Some of these groups consisted only of teenagers and young women, who practiced and drilled and made their own uniforms to look like those worn by male soldiers.

The actions of these Civil War women flew in the face of nineteenth-century society’s portrayal of women as frail, subordinate and passive. Recent chroniclers have begun to note the gallantry of women soldiers during the war.

Simply because they did not fit the traditional female role, female soldiers of the Civil War should not be excluded from historical records. And while many of these women accompanied the men closest to them to war, we should not assume that they were any less patriotic or less committed to their countries than their male counterparts.