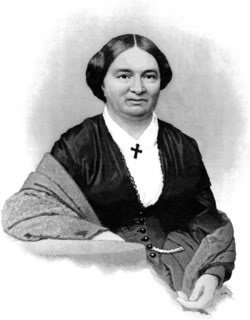 Mary Morris Husband was a well known Pennsylvania nurse, whose illustrious career found her serving the physical, psychological and legal needs of the men in her care. She was known as the nurse with the apron of miracle pockets, because her deep, wide pockets carried games and reading material that entertained and filled the soldiers’ long hours of recovery.

Born in Philadelphia, Pennsylvania, Mary Morris was the granddaughter of Robert Morris, Revolutionary War financier and signer of the Declaration of Independence. She married a prominent and wealthy Philadelphia attorney, J. I. Husband.

Her husband, her two sons and herself constituted her household at the beginning of the Civil War. Patriotic instincts were strong in the family, and the two sons enlisted in the army at the very beginning of the conflict, one of them leaving his medical studies to do so.

Mary worked for three years in field hospitals and traveled on hospital transports to Harrison’s Landing, Baltimore, and Antietam MD, and Fredericksburg VA. She also traveled with the Army to Gettysburg in June of 1863, and a year later served in hospitals at Port Royal and at White House, Virginia.

During and after the Battle Seven Days’ on the peninsula in Virginia in 1862, when from the combined influence of marsh malaria, the heat and fatigue of constant fighting, and the depression of spirits incident to the unexpected retreat, more men fell with mortal sickness than were slain or wounded in the battles.

One of Mrs. Husband’s sons was among the sufferers from disease, and word was sent to her that he was at the point of death. She hastened to nurse him, and after a great struggle and frequent relapses, he rallied and began to recover. Every moment that could be spared from her sick boy, was given to the other suffering soldiers there.

The Hospital Transports
As her son began to recover, Mary resolved to devote herself to the care of the sick and wounded of the army, and the Sanitary Commission assigned her to the position of Lady Superintendent of one of the hospital transports that bore the wounded and sick from Virginia to New York. She made four trips on these vessels, and her skillful nursing won for her the hearty regard of all onboard.

While the troops were being transferred to Acquia Creek and Alexandria, Mrs. Husband went to Washington, where Miss Dorothea Dix, Superintendent of Union Nurses, asked Mary to take charge temporarily of the Camden Street Hospital at Baltimore.

Antietam
After a few weeks’ stay there, Mary went to Antietam, where the smoke of the great battle was just rolling off over the heights of South Mountain. There, at the Smoketown Hospital, where the wounded from French’s and some other divisions were gathered, she found abundant employment. At the request of the surgeon in charge, she remained in charge two months.

On her way home she stopped for an hour or two at camps A and B in Frederick, Maryland, where a considerable number of the convalescents from Antietam had been sent, and these on discovering her, surrounded her ambulance and greeted her most heartily, seeming almost wild with joy at seeing their kind friend once more.

After a brief stay at Philadelphia, during which she visited the hospitals almost constantly, she hastened again to the front, and at Falmouth, Virginia, early in 1863, after that fearful and disastrous battle of Fredericksburg she found ample employment for her active and energetic nature.

As matron of Humphreys’ Division Hospital (Fifth Corps), she was constantly engaged in ministering to the comfort of the wounded, and her solicitude for the welfare and prosperity of the men did not end with their discharge from the hospital. The informalities or blunders by which they too often lost their pay and were sometimes set down as deserters attracted her attention, and so far as possible she always procured the correction of those errors.

Chancellorsville
In early May 1863, immediately after the Battle of Chancellorsville, Mrs. Husband went to United States Ford, but was not allowed to cross, and joined two Maine ladies at the hospital on the north side of the Rappahannock River, where they dressed wounds until dark, slept in an ambulance, and early in the morning went to work again, but were soon warned to leave, as it was supposed that the house used as a hospital would be shelled.

They left, and about half a mile farther on found the hospital of the Third and Eleventh Corps. Here the surgeon in charge urged Mrs. Husband to remain and assist him, promising her transportation. She accordingly left her ambulance and dressed wounds until midnight. By this time the army was in full retreat and passing the hospital. The surgeon forgot his promise, and left Mary to get away as best she could.

It was pitch dark and the rain pouring in torrents. She was finally offered a part of the front seat of a medicine wagon, and after riding two or three miles on the horrible roads the tongue of the wagon broke, and she was compelled to sit in the drenching rain for two or three hours until the guide could bring up an ambulance, in which she reached Falmouth the next day.

The hospital of which she was lady matron was broken up at the time of this battle, but she was immediately installed in the same position in the hospital of the Third Division of the Third Corps, then filled to overflowing with the Chancellorsville wounded. Here she remained until compelled to move North with the army by Lee’s raid into Pennsylvania in June and July, 1863.

Gettysburg
On the July 3, the day of the last and fiercest of the Gettysburg battles, Mrs. Husband started for Gettysburg, determined to go to the aid and relief of the soldier boys, who, she well knew, needed her services. She reached the battlefield on the morning of the 4th in General Meade’s mail wagon. She worked at the field hospital of the Third Corps until that as well as the other field hospitals were broken up, when she devoted herself to the wounded at Camp Letterman.

Here Mary was attacked with miasmatic fever, remaining for three weeks ill in her tent. She was eventually carried home, but as soon as she was well went to Camp Parole at Annapolis, as agent of the Sanitary Commission, to fill the place of Miss Clara Davis, who was prostrated by severe illness induced by her severe and continued labors.

Defending the Innocent
In the autumn of 1863, Mrs. Husband’s attention was called to the injustice of a court martial that had tried a private soldier for some alleged offence and sentenced him to be shot to death. She investigated the case and, with some difficulty, succeeded in procuring his pardon from President Lincoln.

She began from this time to take an interest in these cases of trial by summary court martial, making a study of each one, and though she found that there were some cases in which the punishment was merited, the majority were deserving of clemency. She became their advocate with the patient and kind-hearted Lincoln.

In scores of instances she secured, not without much difficulty, the pardon or the commutation of punishment of those sentenced to death. Rarely, if ever, did the President turn a deaf ear to her pleadings. Every case she presented had been thoroughly and carefully examined, and her knowledge of it was so complete, that he felt he might safely trust her.

Her persistence healed many injustices. This included her son, Henry, who benefited from his mother’s work when President Lincoln signed the order to free him and return him to duty in December 1863.

In December, 1863, Mrs. Husband accepted the position of matron at her old hospital – Third Division of the Third Corps – then located at Brandy Station, where she remained until General Grant’s order issued on the 15th of April, 1864, caused the removal of all civilians from the army.

At White House, she took charge of the low diet kitchen for the whole Sixth Corps, to which her division had been transferred. The number of wounded was very large, this corps having suffered severely in the battle of Cold Harbor, and her duties were arduous, but she made no complaint, her heart being at rest if she could only do something for her brave soldier boys.

When the base was transferred to City Point, she made her way to the Third Division, Sixth Corps Hospital at the front, where she remained until the Sixth Corps were ordered to the Shenandoah Valley, when she took charge of the low diet kitchen of the Second Corps’ Hospital at City Point, and remained there until the end of the Civil War.

On May 6, 1865, Mrs. Husband was gratified by the sight of the gallant Union army marching through Richmond. As they passed, hundreds of the soldiers of the Second, Third, and Sixth Corps, rang out the loud and hearty “Hurrah for Mother Husband!”

Mary felt that she must do something more for her “boys” before they separated and returned to their distant homes. She went to Philadelphia and gathered from her liberal friends and her own moderate means enough money to procure the necessary supplies.

She returned to Virginia, and met the soldiers of the corps to which she had been attached at Bailey’s Cross Roads, and there spent six or seven days distributing to them the clothing and other necessities she had brought. Her last opportunity of seeing them was a few days later at the Grand Review in Washington.

After the War
Through all these labors and toils, Mrs. Husband received no compensation from the government or from the Sanitary Commission. She entered the service as a volunteer, her necessities were met from her own means, and she also gave freely to the soldiers and to their families. Her reward was in knowing that she had accomplished an amount of good that few could equal.

All over the land, in hundreds of homes, in thousands of hearts, her name was a household word, and as the mother looks upon her son, the wife upon her husband, the child upon its father, blessings were breathed forth upon her through whose skilful care and watchful nursing these loved ones were spared.

After the war, Mary lived in Florida with her husband and sons. In 1883, she worked in the Pension Office in Washington DC, and she received a pension of $25 per month for her work during the war.

Mary Morris Husband died on March 3, 1894 and is buried in Laurel Hill Cemetery in Philadelphia, Pennsylvania.