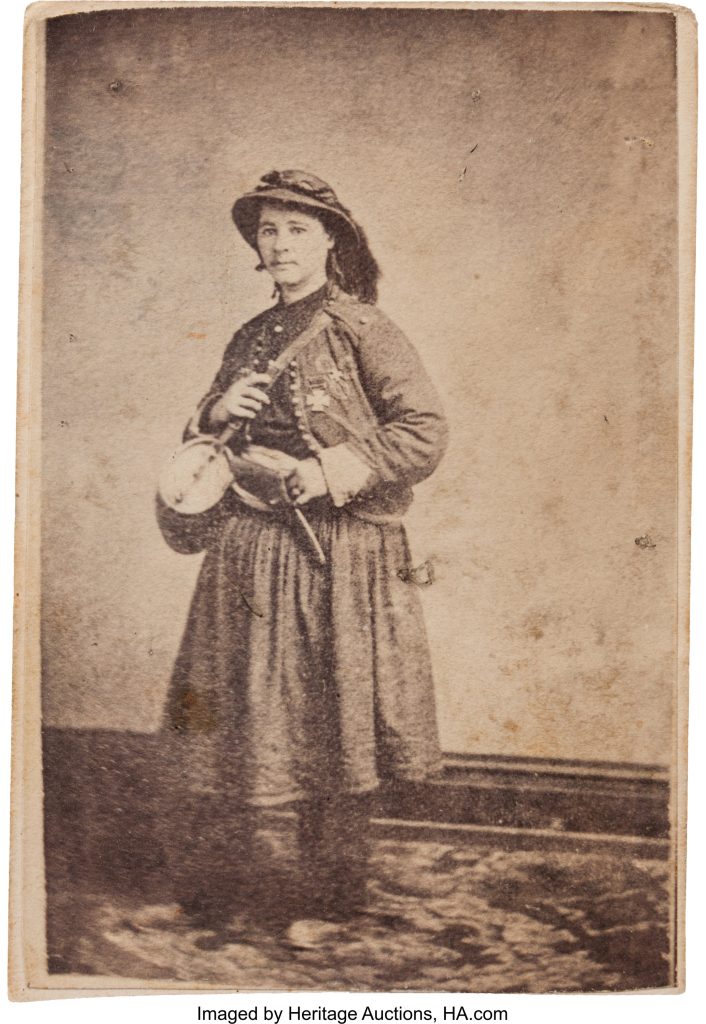 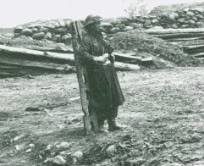 French Mary Tepe, a Civil War Vivandiere, was a French immigrant who married the Philadelphia tailor, Bernardo Tepe. Vivandieres were a combination nurse, cook, seamstress, and laundress who travelled with the Zouaves. They usually adopted the style of clothing of her regiment, but with men’s pants under a knee-length skirt, and carried a cask that was generally filled with water, brandy, or wine. Mary Tepe was certainly the most famous of those ladies.

Image: French Mary Tepe stands on Cemetery Hill at Gettysburg, where she served as a nurse at the field hospitals in July 1863.

Mary (Marie) Brose was born on August 24, 1834 in the village of Brest, France. Her mother was French and her father Turkish. After the death of her father when she was about 10 years old, young Marie immigrated to the United States. Around the age of 20, she married Philadelphia tailor, Bernardo Tepe (also noted as Tebe).

At the start of the Civil War, Bernardo enlisted in Company I, 27th Pennsylvania Volunteers. He wanted his wife to stay home and manage their small tailor shop, but Mary was determined to go with him, and at the age of 27, she decided to follow his regiment to Virginia as a vivandiere. This role is said to have originated with the French army.

She initially sold goods (including contraband whiskey that she carried in a small oval keg strapped to her shoulder) to the soldiers. She was in 13 battles, and carried a .44 caliber pistol. When the regiment was not in action, Mary cooked, washed, and mended for the men.

She drew the pay of a soldier and was allowed 25 cents per day extra for hospital and headquarters services, maker her pay $21.45 per month for over two years. Then some friction in the Paymaster’s Department about the enlistment of women stopped her pay, but did not dampen her patriotism.

In late 1862, Mary left her husband and the 27th Pennsylvania Volunteers under unfortunate circumstances. A veteran’s account stated that, “One night some soldiers, among whom was her husband, broke into the Vivandieres tent and stole $1,600. The men were afterwards punished, but the vivandiere decided to quit the regiment. She refused to have anything to do with her husband. [She was] requested to continue with the regiment, but her indignation was so great that she left.”

Mary left the 27th for the 114th Pennsylvania Infantry, also known as the Collis Zouaves. It was with this unit that she adopted her now famous Zouave uniform of a knee-length skirt over a pair of baggy Zouave pantaloons, a Zouave sash and army belt, and a short blue jacket similar to the men’s with light blue cuffs and brass buttons along the front edge. Her feet are shod with shoes that look like a pair of soldiers brogans.

French Mary, as she was often called, carried her small keg of whiskey to the front lines to comfort the wounded and encourage the faint of heart. She was a courageous woman, and often got within range of the enemy’s fire. In December, at the Battle of Fredericksburg, where she helped to establish a field hospital and care for the wounded, she caught a bullet in her left ankle.

In May, 1863, at the Battle of Chancellorsville, Mary circulated among the thirsty troops with her canteen, braving heavy fire, her skirts riddled with bullets. It was for the meritorious conduct in battle that she was awarded the Kearny Cross.

She was seen marching with her unit in the campaign up to Gettysburg. Most Vivandieres were sent home when the heavy fighting started, so Mary is considered the only enlisted woman at Gettysburg, where she carried water and treated the wounded during the heaviest of the fighting. For several weeks following the Battle, she volunteered her services as a nurse in the field hospital located on Taneytown Road, behind the Round Tops. After a few weeks of tending to the injured, she continued on with her regiment.

In the spring of 1864, Mary was seen at the Bloody Angle during the Battle of Spotsylvania Court House by a soldier from another regiment. “I looked around,” he wrote. “Sure enough there was a woman! She was about 25 years of age, square featured and sunburnt, and dressed in Zouave uniform in the Vivandiere style. She was with two men and they seemed to be looking for their regiment, the 114th Pennsylvania Infantry.”

It is believed that Mary Tepe was still with the 114th in Washington, DC, for the Grand Review held on May 23, 1865, followed by the mustering out of the regiment a few days later.

After the war, Mary moved to the Pittsburgh area and married Richard Leonard, a veteran of the 1st Maryland Cavalry. Their date of marriage was April 9, 1872. In 1893, she traveled to Philadelphia to celebrate the anniversary of the Battle of Fredericksburg.

In 1897, Mary filed divorce papers, and in 1901 she wrote a will leaving all her possessions to her husband, valued at a total of $31.35. It was said that “for many years the aged woman had been an invalid and was lately a great sufferer from rheumatism and a rebel bullet which she still carried in her left ankle.”

After living alone for several years outside Pittsburgh, Mary took her own life in May of 1901 by drinking Paris green, a pesticide and paint pigment. The wound she suffered to her ankle at Fredericksburg continued to cause such pain that it may have contributed to her suicide.

This tireless and courageous woman’s grave lay unmarked for eighty-seven years, until in 1988 a stone was erected and then dedicated in a ceremony at St. Paul’s Cemetery on Lafferty Hill in Carrick, Pennsylvania.