Florence Nightingale of the South 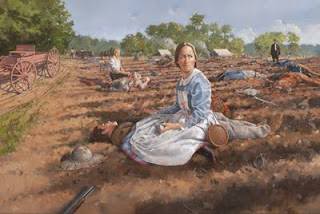 There is not much information available about the personal life of Fannie Beers, only that she was born in the North, and married A. P. Beers when she was very young. She wrote in her memoirs, Memories: A Record of Personal Experiences and Adventures During Four Years of War, that she met him while he was a student at Yale University and she was living with her mother in New Haven, Connecticut.

The couple moved to New Orleans at some point, and Fannie apparently grew to love the South and its people. Married bliss lasted only a few years before the Civil War began. Mr. Beers enlisted in the Confederate Army, and became a sergeant in Fenner’s Louisiana Light Artillery.

My husband, after preliminary service with the ‘Minute Men’ and the State troops, as a member of Company A, Crescent Rifles, was, with this company, regularly mustered into the Confederate service in April 1861 and left for Pensacola, Florida.

Fannie returned to the North to live with her mother. Fannie was apparently pregnant with her second child at that time, because she wrote that her mother gave her “unceasing care,” and “during this troubled time a little babe was born to me, who only just opened its dark eyes upon the troubled face of its mother to chose them forever.”

While living at her parents’ home, Fannie received a letter from her husband, inside which he enclosed a tiny Confederate flag that she kept in her prayer book. Her neighbors demanded that she destroy the flag. Instead she pasted the flag on her “naked flesh just over my heart.”

Fannie took her son, and with the help of her family and friends, made her way to Virginia where she was reunited with her husband. Throughout the remainder of the war, Fannie worked as a nurse in Virginia, Georgia and Alabama.

In Richmond, she wrote:

Scattered all over the city in many a shady nook were cozy, pleasant retreats, where wounded or sick soldiers were gladly welcomed—private hospitals presided over by ladies, sustained by their constant attention. One lady generally had direction of the affairs of one particular hospital, assisted by others whose duties lay just there, and who devoted each in turn on successive days their entire care and attention to this labor of love.

At first she assisted in a private hospital maintained by some Richmond ladies, who sent in all the food required. In a few weeks she was appointed matron-in-charge of the Second Alabama Hospital.

Soon after she began her regular duties, the sick and wounded began to pour in, and from this time forward she was constantly employed till within a few weeks of the battle of Shiloh.

After her husband’s command was sent to Tennessee in 1862, she left Richmond, and for a few weeks visited her husband’s relatives in Alabama.

A Confederate army surgeon, Dr. William McAllister, was establishing a field hospital at Gainesville, Alabama, to treat the wounded of the Battle of Shiloh. He put a notice in the newspaper asking for a women to serve as matron, and Fannie Beers volunteered immediately.

She said she desired to do something while her husband was at the front defending our Southern homes. I soon found what she lacked in age and experience was made up in patriotism, devotion to the Southern cause, constant vigilance and tenderness in nursing the Confederate sick and wounded.

She remained as hospital matron at Gainesville, Alabama; Ringgold, Georgia; Newnan, Georgia; and Port Valley, Georgia, embracing a period of nearly three years. She was all the time chief matron, sometimes supervising more than one thousand beds filled with sick and wounded. Through heat and cold, night and day, she was incessant in her attentions and watchfulness over the Confederate sick and wounded.

In July 1864, while at Newnan, Georgia, Fannie remained with the wounded while the surgeon and every other able-bodied man successfully defended the town from Union attack. Fannie cared for the wounded of both armies and 1000 Federal prisoners. Newnan was home to seven field hospitals.

While Atlanta was being shelled, she took boxes of provisions to her husband and his comrades in the trenches. While at Fort Valley, her courage and patriotism were put to the severest test in an epidemic of smallpox. When all who could left, she remained and nursed the Confederate soldiers.

I guess it’s no wonder she was called by many ‘The Florence Nightingale of the South.’