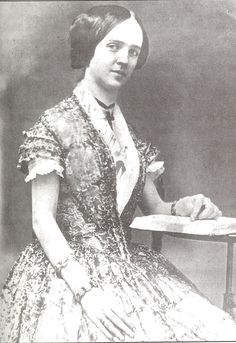 Queen of the Confederacy

Known during and after her lifetime as the Queen of the Confederacy, Lucy Pickens was described as “beautiful, brilliant and captivating” by her male contemporaries, and this perception of her helped shape the stereotype of the Southern belle.

Lucy Holcombe was born on June 11, 1832, on the Holcombe cotton plantation named ‘Woodstock’ near LaGrange, Tennessee, not far from where the Battle of Shiloh would be fought 30 years later. She was the second of five children. Both of her parents were well-educated.

The Holcombes sent their two daughters, Anna and Lucy, to study at a Quaker school, Moravian Seminary for Women, in Bethlehem, Pennsylvania. But Lucy’s father lost everything when he staked his farm and his money on a horse race. In 1850, the family moved to Marshall, Texas.

Lucy was an intelligent and ambitious young woman, but she did not challenge the rules of the patriarchal society in which she lived, and was totally devoted to her parents and siblings. She developed a love of writing and a desire to make a contribution to society, instilled in part by her mother.

Lucy thrived in the social world of the Southern belle. She was a notorious flirt and had many suitors. Her fiance, Colonel William Crittenden, was executed in Cuba in 1851 in an attempt to free the island from Spanish control. In reaction to this loss, she wrote a novel, The Free Flag of Cuba or the Martyrdom of Lopez, which was published in 1855.

In 1856, while on a vacation to White Sulphur Springs in Virginia, Lucy met Francis Pickens, a member of the famous South Carolina political family. He was a lawyer and a secessionist, twice widowed and twice her age. He was older than her own parents and by all accounts a bit stuffy. He was also the owner of 500 slaves and plantations in Alabama, Mississippi and South Carolina.

In 1858, Francis Pickens accepted an appointment by President James Buchanan as ambassador to Russia. He sent Lucy an ultimatum to the effect that if she did not marry him and come along, she would not hear from him again.

She had always wanted to marry someone who could take her abroad. Knowing this man might be her ticket to the social prominence she desired, Lucy accepted his proposal. The two were quickly married at Lucy’s home in Texas, against the strong objections of her family.

Spending Pickens’s money freely, Lucy dazzled the royals. With her knowledge of French and Russian and her elaborate wardrobe, she was soon a favorite of the court in St. Petersburg. Czar Alexander II and Czarina Maria showered the couple with gifts.

While in Russia, Lucy became pregnant with her only child. The Czarina moved Lucy into the Imperial Palace and called in the royal physicians for the birth of her daughter, Eugenia Frances, on March 14, 1859. The Czarina christened the baby ‘Douschka,’ Russian for ‘little darling,’ and she was always known by that name.

The Czar and Czarina served as godparents at her baptism and bestowed many gifts on her. The Czar wrote to Douschka every year until his death, and his son took over the duties until Douschka’s death.

In 1860, as South Carolina moved toward secession, Francis Pickens decided to return home. He arrived just in time to enter the race for governor. He was elected governor and assumed office on December 16, 1860. Four days later, the state convention voted to leave the Union.

Pickens ordered the Morris Island battery to fire on the USS Star of the West as the ship delivered supplies to Union forces at Fort Sumter in Charleston harbor, the first military engagement of the Civil War.

Lucy became the center of attention in South Carolina, giving grand parties. In a show of patriotism to the Southern cause, she sold some of the jewelry she had received from the Russian royal family to buy uniforms for South Carolina soldiers.

Grateful for the gesture, the commander of the Citadel raised a force of infantry, artillery, and cavalry, and named it the Holcombe Legion. Its flag was a blue banner with the South Carolina white palmetto tree on it and a star of Texas, Lucy’s home.

She is also credited with playing a role in the Confederate government as an advisor and confidante to her husband. Although the war wreaked havoc on the South and poverty abounded, Lucy managed to keep the Pickens’ home, ‘Edgewood,’ at the center of social circles.

In January 1869, Francis Pickens died at Edgewood. Lucy continued to live there, and managed three plantations with the help of her brother John. Though only 36 when her husband died, Lucy never remarried.

She worked to have George Washington’s home declared a historical monument, serving as Vice-Regent for South Carolina in the Mount Vernon Ladies Association from 1876 until her death.

In 1894 Lucy’s daughter Douschka died at the age of 35, and Lucy died five years later on August 8, 1899 leaving her house to Douschka’s two daughters. She was buried next to her husband and daughter in the Edgefield Cemetery.

A bust of Lucy Holcombe Pickens, created while she was in Russia, is on display at the South Carolinian Library at the University of South Carolina at Columbia.