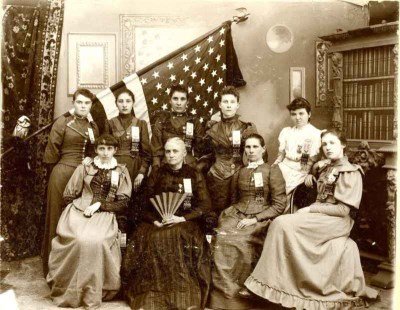 Elizabeth Mendenhall was one of the managers of the Soldiers Aid Society of Cincinnati, Ohio, which was financed mainly by monetary gifts from private citizens. When donations slowed to a trickle, Mendenhall helped organize a sanitary fair in 1863 to raise funds to care for the soldiers.

Image: Soldiers Aid Society like the one established by Elizabeth Mendenhall

Elizabeth (maiden name unknown) was born in Philadelphia in 1819, but her childhood and youth were spent in Richmond, Virginia, at the home of her sister, her only close relative. Her relatives belonged to the Society of Friends (Quakers), who were also abolitionists, and she grew up with a strong dislike of slavery. After her marrige in 1838 to Dr. George Mendenhall, Elizabeth moved with her husband to Cleveland, and later to Cincinnati, Ohio.

Soldiers Aid Society
In Northern communities, women organized a Soldiers Aid Society to make items for the troops, care for the sick and wounded, provide ambulance and hospital service, and send food to soldiers in camp. When the first call for troops was made in April 1861, and throughout the summer and autumn of that year, Elizabeth Mendenhall was active in organizing sewing circles and aid societies to make the necessary items the soldiers needed when suddenly called to the field.

In February 1862, the wounded from the Battle of Fort Donelson began to pour into the government hospitals of Cincinnati. From that time until the close of the war, the hospitals were almost constantly filled with sick or wounded soldiers. Mendenhall worked at all four general hospitals in Cincinnati, but particularly at the Washington Park Hospital.

Mendenhall spent half of every day, often the whole day, serving the sick and wounded in any capacity that could add to their comfort. She obtained supplies and luxuries for the sick, waited upon them, wrote letters for them, consoled the dying, gave information to their friends of their condition, and made the necessary preparations for the burial of the dead.

During the four years of the war, she was not absent from the city for pleasure but six days, and during the whole period, there were not more than ten days in which she did not perform some labor for the soldiers’ comfort. During all this time, she was actively involved in promoting the Soldiers Aid Society and serving as its president.

United States Sanitary Commission
The United States Sanitary Commission, established on June 9, 1861, was a civilian organization that managed the collection and distribution of supplies from local soldiers aid societies to Union camps and hospitals. Women played a crucial role in this relief effort. At central depots, managers oversaw the collection of contributions as well as the purchase of supplies with money from appeals and fairs.

The Cincinnati chapter of the United States Sanitary Commission played a vital role over the course of the war. Its members helped the federal government convert 33 steamboats into hospital ships, created eight hospitals in the Cincinnati area, and established a soldiers’ home to provide food and shelter for those traveling through the community.

Cincinnati Sanitary Fair
By 1863 Northern women were running very low on money and supplies to care for ill and wounded soldiers. Sanitary Fairs offered ways for local communities to support the war effort. The Great Northwestern Sanitary Fair – the first of its kind – was held in Chicago, Illinois from October 27 to November 7, 1863; it raised almost $100,000.

These large fairs provided food and entertainment to the citizens of the town for a small entrance fee, and they were hugely successful. However, (the most important part) instead of sending the money to the U.S. Sanitary Commission in New York City, the Soldiers Aid Society used the money to buy supplies from local merchants, which also stimulated the economy in towns all over the North.

The enthusiasm generated by the Chicago Sanitary Fair led Elizabeth Mendenhall to believe that a Fair would be successful in Cincinnati, and the idea was well received by the Cincinnati branch of the United States Sanitary Commission. She began to publicize the fair with articles in the daily newspapers, her first appearing in the Times of October 31, 1863. 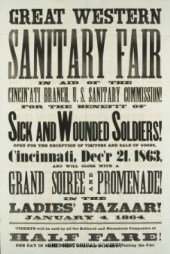 An organization established, committees were appointed and Mendenhall was unanimously chosen President of the ladies’ committee and second Vice-President of the General Fair organization. She devoted all of her energies to this work and appealed to the patriotic young ladies of Cincinnati and the Ohio Valley for their cooperation, and the results were highly successful.

The organizers of the Fair wanted to obtain the autographs of famous persons to be auctioned off to raise money. Senator John Sherman of Ohio asked President Abraham Lincoln to donate his original draft of the recent Amnesty Proclamation for the auction. The proclamation offered amnesty to those engaged in rebellion if they would take an oath of allegiance, and it contained a general outline of Lincoln’s reconstruction plan.

Since the original draft was in poor condition, Lincoln offered to hand copy the entire document, including all corrections, additions, etc. When asked if he minded the additional labor required to copy the entire document, Lincoln replied that if the labor relieved the sufferings of a single soldier, he would cheerfully perform it. The five-page proclamation, along with autographs of cabinet members and senators, was sent to Cincinnati.

The Great Western Sanitary Fair ran from December 21, 1863 through January 4, 1864 at the Cincinnati opera house and was one of the major fairs held in cities across the country. Bazaars, food stands, art galleries, lectures and concerts were among the attractions.

The net proceeds of the Cincinnati sanitary fair was $235,000, of which $175,000 was collected from the citizens of Cincinnati. The aggregate results of the Cincinnati Soldiers Aid Society, before and after the fair, are known to have realized about $400,000 in money and nearly $1,500,000 in hospital supplies. 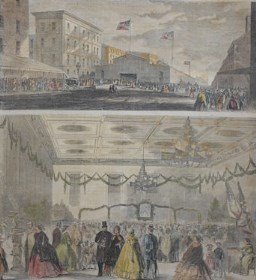 After the fair closed, Mendenhall resumed her hospital work and her duties as President of the Soldiers Aid Society, and continued to serve in those positions until the end of the war. In late 1864, she helped organize a fair on behalf the soldiers’ families, which raised $50,000. The testimonies of her associates to the admirable manner in which her hospital work was performed, and the thousands of soldiers who were the recipients of her gentle care, give equally earnest testimonies to her kindness and tenderness of heart.

The freedmen and refugees have also shared Mendenhall’s kindly ministrations, and even after the close of the war her self-sacrificing spirit has found ample employment in endeavoring to lift the fallen of her own sex out of the depths of degradation, to the sure and safe paths of virtue and rectitude.

With the modesty characteristic of a patriotic spirit, Mendenhall depreciates her own labors and sacrifices. In a letter to a friend she said:

What are my humble efforts for the soldiers, compared with the sacrifice made by the wife or mother of the humblest private who ever shouldered a musket?

Because of their leadership roles in the Soldiers Aid Society and the Great Western Sanitary Fair, Elizabeth Mendenhall the women who worked with her expanded their role in society. Many who participated in these activites during the war would go on to be leaders in the women’s suffrage movement. Opportunities also opened up for women to have successful careers in such public fields as nursing.

Women in the South suffered a similar lack of funds during the Civil War. As the war dragged on, they also ran out of supplies. Most of the South’s wealth was in cotton, which they were unable to sell due to the Union blockade of Southern ports. Near the end of the war, with their children were starving and nothing to send to the troops, many wives and mothers wrote letters begging the soldiers to come home and care for their family.