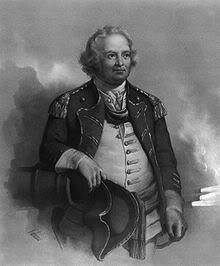 Israel Putnam was born on January 7, 1718 in Salem, Essex County, Massachusetts, to Joseph Putnam and Elizabeth Porter Putnam. He was not interested in education but loved being physically active and adventurous, and had a reputation for courage and competitiveness as a young man.

At age 20, Putnam married Hannah Pope, and shortly thereafter the couple moved to Connecticut, where he and his brother-in-law together bought 514 acres. Within two years he was able to buy out his partner and thus became sole owner in what was called the Putnam Farm, on the top of the high hill between the villages of Pomfret and Brooklyn.

Although Massachusetts born, the best days of his life were spent in his adopted state. For many years Israel Putnam devoted himself to the cultivation of this farm, and it was considered one of the finest in New England. He gave special attention to raising sheep and fruits, especially winter apples.

During the French and Indian War, Putnam excelled in guerilla tactics, fighting with the Connecticut militia in a special unit known as Roger’s Rangers. He quickly proved his talents as a skilled warrior and was promoted to captain in 1755 and then to major in 1758.

With fifteen honorable combat wounds marking his body and memories of many hair-raising adventures, the legend came home to Pomfret in 1765, hoping to find peace in farming the familiar acres, getting to know his eight children and socializing with old friends. Shortly after his return, one of his ten children and his wife Hannah died.

Putnam’s leadership was again summoned in 1764 during Pontiac’s Rebellion when he was appointed Commander of five militia battalions. He was soon married Deborah Gardiner, a wealthy and socially prominent widow whom he had known for years, and he managed to spend a relatively quiet ten years, farming and devoting himself to the local offices to which his fellow townspeople elected him.

Putnam was outspoken against British taxation policies and around the time of the Stamp Act crisis in 1766, he was elected to the Connecticut General Assembly, served as chairman of its committee of correspondence, and was one of the founders of the Connecticut Sons of Liberty.

By the eve of the Revolution Israel Putnam had become a relatively prosperous farmer and tavern keeper, with more than a local reputation for his previous exploits.

Increasing animosity between the hard-working colonials, who had built their new communities with their own blood sweat and tears, and their British overseers, who were taxing the colonies ever more heavily to finance affairs at home, finally exploded with the shot heard ’round the world on April 19, 1775, at Lexington, Massachusetts.

Israel Putnam in the Revolutionary War
On the morning of April 20, 1775, Putnam and his son Daniel had gone into the field near the tavern at Brooklyn Green to plow. They were busy at work when about eight o’clock a messenger rode into the village, announcing that the British had fired on the militia at Lexington, Massachusetts, had “killed six men and wounded four others,” and were on their march into the country.

According to legend, Putnam, without changing his work clothes, mounted a horse at the stable to spread the alarming news and consult with the militia officers and the committees of the neighboring towns. He hurried to the home of Governor Jonathan Trumbull at Lebanon, and received orders from him to go to Boston.

When Putnam returned home several hours later, he found hundreds of men gathered on Brooklyn Green ready to obey his orders. He told them that, according to the arrangements which he had made, military officers would soon arrive to direct their movements.

It was now nearly sunset, but without stopping to rest, Putnam started on a night ride for Cambridge. The next day, after consulting with the Committee of Safety, he rode on to Concord, traveling not less than a hundred miles in eighteen hours.

From there he sent a dispatch to Brooklyn with directions about the bringing up of the militia. He was soon summoned to Hartford, to consult with the legislature of Connecticut, and after a week returned to Cambridge with the chief command of the forces of that colony, and the rank of brigadier general.

The work of organizing a Continental army began in June 1775, when Congress assumed control of the troops about Boston. After appointing Washington to the chief command, the Congress appointed Artemas Ward, Charles Lee, Philip Schuyler, and Putnam as the four major generals of the army. In his new capacity General Putnam commanded the center of the army at Cambridge, while Ward commanded the right wing at Roxbury, and Lee the left wing stretching to the Mystic River.

Leading the Connecticut contingent at the Battle of Bunker Hill on June 17, 1775, Putnam repeatedly rallied and encouraged the loosely organized Colonials. First-hand accounts of the soldiers he commanded credit his intrepid leadership with turning what most certainly would have been a bloody rout into a resounding victory for the Americans.

After the capture of Boston, General Washington sent Putnam to New York, where he took command, April 5, 1776. On August 25, General Nathanael Greene, who commanded the works on Brooklyn Heights, was ill with a fever, Putnam was placed in command there.

For the disastrous defeat of the Americans two days later at the Battle of Long Island, he cannot be held responsible. He was blamed at the time, but the wonder is not that 5,000 half-trained American soldiers were defeated by 20,000 British veterans, but that they caused the British general to pause, giving Washington time to plan the withdrawal of the army from its exposed situation.

After the army had crossed to New York City, Putnam commanded the rear division, which held the city until the landing of the British at Kip’s Bay, when he had to retreat. In the action at Harlem Heights, part of Putnam’s force, under Colonel Knowlton, was especially distinguished.

In the disastrous period that followed, Putnam was put in command of Philadelphia. In the defense of Philadelphia in the winter of 1776-77, he fought alongside his troops and was particularly revered by his men. His hearty, gregarious nature was in contrast to George Washington’s reserved and noble demeanor, yet the two men greatly respected each other. After the enemy retreated on January 4, 1777, Putnam brought forward the American right wing to Princeton, New Jersey, where he remained in command until the middle of May.

In 1777 Putnam received another military command defending the highlands of the Hudson river with headquarters at Peekskill. With future Vice-President Aaron Burr in his charge, Putnam abandoned Fort Montgomery and Fort Clinton to the British, and was brought before a court of inquiry for those actions. However, he was exonerated of any wrongdoing.

Later that year, the news that his beloved wife Deborah Gardner Putnam had died reached him at Peekskill. He took a short absence, saw her buried, and then returned to duty. The suffering was intense throughout the army that winter.

At the end of the year, Putnam was replaced at Peekskill, and was sent to Connecticut to help with recruiting the army for the next campaign. During the years 1778-89, he was engaged in the western part of Connecticut, with headquarters usually at Danbury, cooperating with the force in the highlands.

During the terrible winter of 1778-1779, Putnam and more than 3000 men went into winter quarters spread throughout three camps at Redding, Connecticut. These camps were established to keep an eye on the storehouses in Danbury, Connecticut – which had been burned by the British the year before but resurrected to keep supplies going to Washington’s army – and to protect the Long Island Sound and the Hudson River Valley. Many of these men were the same who had suffered at Valley Forge the previous year, and suffered through another long stretch of winter weather at Redding.

General Putnam narrowly avoided capture by the British when he was nearly trapped by an enemy raiding party at a house in Greenwich, Connecticut, on February 26, 1779. He had come from his headquarters at White Plains, New York, to inspect some American positions in Greenwich. Early one morning, just as he finished lathering up for his shave, he suddenly caught sight of some Redcoats in his shaving mirror.

They were sneaking through the door behind him, ready to pounce on the man who, for them, would have been a great catch. In an instant, Putnam was out the window, into the saddle and galloping away down a road leading to the edge of a rock cliff. With the British in close pursuit, Putnam had no choice when he reached the top of the precipice: horse and rider leaped over the edge.

The legend states that General Putnam escaped a cohort of British Dragoons by riding his horse down 100 stone steps at Horse Neck in the township of Greenwich. As his pursuers watched in astonishment from the heights, the general plunged toward the valley floor below, his horse slipping and stumbling every step of the way. Since none of the British had the nerve to follow Putnam’s plunge down the embankment, he easily escaped.

In the summer of 1779, Putnam was posted with his men two miles below West Point at Buttermilk Falls, and early that winter he and his men went into winter quarters at Morristown, New Jersey. In December 1779, the general made a short visit to his family at Brooklyn.

The general set out on his return to camp, but along the way he suffered a stroke, which ended his military career. He returned to his family at Brooklyn, where he spent the remainder of his life among the affectionate friends and neighbors of his youth. He was able to walk, ride and enjoy society to some extent, and became a fabled storyteller in his later years.

In May 1790, an acute inflammatory disease attacked the veteran and in two short days he was gone.

Israel Putnam died on May 29, 1790, at home in Brooklyn, Connecticut. At his funeral religious rites were mingled with military honors, and the eulogy was delivered by a personal friend.

He was buried in an above-ground tomb in Brooklyn’s South Cemetery. Above the grave, the family erected an impressive marble slab, with an epitaph composed by Timothy Dwight of Yale. Within a few years, however, so many people visited Putnam’s tomb that the badly-mutilated marble marker was removed for safe keeping to the Connecticut State Capitol in Hartford.

In 1888, Putnam’s remains were removed from the cemetery and placed in a sarcophagus built into the foundation of a monument erected on a plot of ground near the Brooklyn town green. Atop the monument stands an equestrian statue of Connecticut’s greatest folk hero.