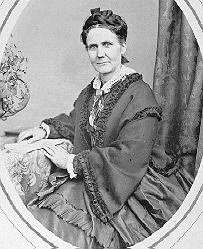 In the spring of 1861, when men were called to join the Union army and fight for their country, Isabella Fogg of Calais, Maine felt that she was called also. She felt compelled to leave the quiet and seclusion of her home, and do all that a woman could do to sustain the hands and the hearts of those who had the great battle of freedom to fight. About this time, changes occurred in Fogg’s family, which seemed to release her from pressing obligations to remain at home.

Isabella Fogg followed her son Hugh, a member of the 6th Maine Regiment, to Washington, DC, and she soon volunteered to work for the Maine Camp and Hospital Association, based in Portland, Maine. She began visiting hospitals in the Washington area.

In September, 1861, Fogg turned her attention to the post hospital at Annapolis, in which the spotted typhus fever had broken out. One or more fell victims to it daily, much alarm existed, and it was difficult to obtain nurses for the sufferers. Fogg volunteered her services, and week after week, was on duty in the fever ward, constant in her devotion to the patients, and indifferent to the danger of infection. This duty lasted until the spring of 1862.

The epidemic subsided, and Fogg placed herself under the direction of the U.S. Sanitary Commission, and took part in the spring of 1862, in the Hospital Transport Service. By the fall of 1862, the Maine Soldier’s Relief Agency, headquartered in Washington, had assumed responsibility for coordinating relief efforts for Maine soldiers.

She realized that the greatest need for assistance was in the field, not in the Washington hospitals. She and other ladies from the Camp and Hospital Association and the Maine Soldier’s Relief Agency pressed for permission to travel to the battlefields.

Aftermath of the Battle of Antietam
On November 1, 1862, Isabella Fogg and Harriet Eaton of the Association, together with Charles C. Hayes of the Agency, set out for Sharpsburg, Maryland, to help “her boys” from the Pine Tree State who had fallen during the Battle of Antietam. Almost two months after the battle was fought, the hospital grounds had deteriorated to the point that she was “horrified to find sick and wounded soldiers, supposedly long since removed, still languishing all over the area.”

In a progress report to the Maine agency in Washington sent on November 10, Fogg wrote:

We then went up to Smoketown, here we found 30 Maine men. This place is in a most miserable condition, the men complain very much. The effluvia (noxious odor) arising from the condition of these grounds is intolerable, quite enough to make a man in perfect health sick, and how men can recover in such a place is a mystery to me.

As the Maine women had not expected the great number of people in need, their single wagon carried little that was not depleted within minutes. So, after promising to apply pressure on the agency for more relief stores, Fogg’s team continued on a snow-covered road toward Bakersville – a 20-minute ride by horse and creaking wagon.

Reaching the village, they discovered 20 badly injured soldiers of the 5th Maine “left in a school house in care of a steward, without supplies; found him making every effort to keep them comfortable.” The Maine women repeated the promise made at Smoketown to contact the agency for much-needed supplies.

Fogg and her companions ran into difficulties with the U.S. Sanitary Commission, which they felt ought to have had the situation under control for many weeks. Nevertheless they pressed on, distributing whatever supplies they could find to the soldiers. The journey continued to other field hospitals at Sharpsburg, Berlin (Brunswick today), Harpers Ferry, Keedysville and eventually Hagerstown.

Each stop had its own heart-sickening sights, leading to a withering letter to the Maine agency for delaying vital rations for Antietam survivors:

You no doubt think your ladies in Washington are doing a great work. But I can assure you if they were here, they would find the stern reality of want, privation and extreme suffering.

Making good her word, Isabella Fogg and associates returned late in November to the valley of the Antietam. Frustration and despair were evident in her report:

Again we went to Smoketown, hoping to find them in a more comfortable condition than when we were last there, but how sadly were we disappointed. How I wish I could introduce you, and the Washington [Commission] to Smoketown [Hospital]. In the midst of this driving snow storm!

You could have seen the poor fellows huddled together, with their pallets of straw on the ground, their tents with no stoves. Those who were able to creep out of their tents were crouched over fires built in the woods, their heads covered with snow.

Once again, the Maine agency in Washington failed to respond to Fogg’s urgent requests, but she was successful in collecting close to 100 flannel shirts from the good residents of Hagerstown. She would always remember “expressions of gratitude” received while personally handing them out to “my boys.”

When General George B. McClellan’s army crossed the Potomac, Isabella Fogg followed, and early in December 1862, was again at the front, where she was a sad spectator of the fatal disaster of the Battle of Fredericksburg. Mrs. J. S. Eaton from the Maine Camp Hospital Association had accompanied Fogg to the front. During the sad weeks that followed, these devoted ladies labored in the hospitals, and dispensed their supplies of food and clothing, not only to the Maine boys, but to others who were in need.

When the Battle of Chancellorsville was fought in the first days of May 1863, Fogg and Mrs. Eaton spent almost a week of incessant labor, much of the time day and night, in the temporary hospitals near United States Ford, dressing wounds, attending to the poor fellows who had suffered amputation and furnishing cordials and food to the wounded who were retreating from the field, pursued by the enemy.

In works like these, in the care of the wounded who were sent in by flag of truce, and the distribution to the needy of the stores received from Maine, the days passed quickly, until the invasion of Pennsylvania by General Robert E. Lee, which culminated in the Battle of Gettysburg in July, 1863. Mrs. Fogg pushed forward and reached the battlefield the day after the final battle. Fogg labored among this great mass of wounded and dying men for nearly two weeks.

Back to Virginia, Fogg then returned to the front, and was with the Army as a voluntary Special Relief agent, through all its changes of position on and about the Rapidan River, at the affair of Mine Run and the other movements prior to General Ulysses S. Grant‘s assumption of the chief command. In the winter of 1864, Isabella made a short visit home, and the Legislature granted a sizeable sum of money to be placed at her disposal, to be spent at her discretion for the comfort and care of Maine soldiers.

At the opening of the Overland Campaign of May 1864 Fogg went to Belle Plain and to Fredericksburg again, and in company with scores of others worked night and day to relieve the indescribable suffering of the wounded who filled that city after the Battles of the Wilderness and Spotsylvania Court House.

After two or three weeks, Fogg went to Port Royal, to White House, and finally to City Point, where she helped organize one of the hospitals there. She returned to Maine, where she received the news that her son, who was in the Army of the Shenandoah, had been wounded at the Battle of Cedar Run.

She abandoned her work in Maine, and hurried to Martinsburg, Virginia, where she met a friend, one of the delegates of the Christian Commission, and learned that her son had been badly wounded and underwent amputation of one leg. After a few days, he had been transferred to a Baltimore hospital. She hurried to that city, and with great joy, found him doing well, but anxiety and overexertion soon prostrated her own health, and she was laid up for a month or more.

In November, 1864, Isabella’s health had improved, and she returned to Washington. Her ties with the Maine Camp and Hospital Association were severed by them in 1863 for reasons that are not clear. Still wanting to help others, she volunteered with the U.S. Christian Commission.

While on duty on this boat in January, 1865, Isabella Fogg accidentally fell through an open hatch, permanently injuring her spine. Officers of the Army of the Potomac, including Generals Joshua Lawrence Chamberlain, George Gordon Meade and Ulysses S. Grant were instrumental in seeing that Fogg received a federal pension for her dedicated service during the war.

Herself an invalid for life, among strangers, her only son permanently crippled from wounds received in battle, yet this heroic woman was full of joy that she had been permitted to labor so long, and accomplish so much for her country and its defenders, and that peace had at last dawned upon the nation.