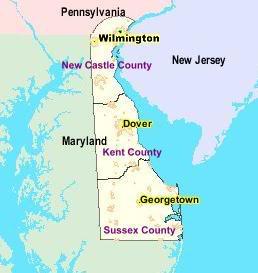 Delaware began as New Sweden, an abortive attempt by the Swedes to found a colony on the shores of Delaware Bay in the New World. There were few immigrants, and the colony suffered from a chronic shortage of manpower. It had only 183 residents by 1647. The Swedes also tried to join the rush by European powers to get footholds in West Africa to gain access to gold and slaves, but they were soon driven out by more aggressive European powers.

The Swedes turned to Indian slaves when they could get them, but disease and westward migration had already emptied the region of native tribes. Still, a few Indian slaves persisted in Delaware until the 1720s, and the presence of a clause in the 1776 state constitution barring transportation of Indian slaves indicates that it was at least considered a possibility at that late date. Perhaps they were brought from the Carolinas.

The Dutch
The first black slave in the colony was named Anthony, and he had been brought up from the West Indies in 1639. But African slavery didn’t truly begin in a large scale in Delaware until the Dutch took over. Peter Stuyvesant, the aggressive director-general of New Netherlands, in what is now New York, set out to re-establish an old Dutch claim to the Delaware Bay, even though the Netherlands and Sweden were at peace. He built a fort a few miles downriver from the Swedes’ Fort Christina to provoke them. The Swedes took it over, and in 1655 Stuyvesant used that as a pretext to lead a large military expedition against New Sweden and easily conquer it.

First Africans
The Dutch had ousted the Portuguese as the early leaders in slave shipping, and they began to bring Africans across the Atlantic to work the land in the new colony on the Delaware. The numbers of slaves declined after the English conquest of New Netherlands in the fall of 1664, but rose again in the early 18th century as the labor-intensive tobacco and corn economy expanded. These slaves were generally purchased in Philadelphia or from the Eastern Shore. In the decade before the Revolution, 20 to 25 percent of the colony’s population was enslaved. That figure is much higher than any Northern colony, but lower than any in the South.

For the Trial of Negroes
The socialization of blacks was controlled in Delaware by an act of 1700 entitled, For the trial of Negroes. Blacks were given more severe penalties than whites for certain crimes, were prohibited from carrying weapons or assembling in large numbers, and were subject to special court procedures. Later laws placed even greater restrictions on them by prohibiting voting, holding office, giving evidence against whites, and banning mixed marriages.

On the eve of the American Revolution, so many slaves resided in the colony that some inhabitants feared an insurrection. The General Assembly passed an act in 1773 raising the duty to 20 pounds for bringing an individual slave into the Lower counties with the explanation that numerous plots and insurrections in mainland America had resulted in the murders of several inhabitants.

Caesar Rodney was at the center of one of the first slavery debates in Delaware’s history. It began in 1767, and lasted off and on until the Revolution. Rodney led the faction that was in favor of ending slave importation into the colony. But a closer look at the votes in the case suggest that this was not at heart a humanitarian issue. The supporters of the ban were in Rodney’s home county, Kent. The opponents were those to the north and south.

“A probable explanation is that the more established Kent planters had a surplus of slaves by 1767 and were anxious to sell them to farmers in the undeveloped sections of Sussex and southern New Castle County,” a historian of slavery in Delaware has written, “where there was still a strong market for unfree blacks. An import ban would help keep prices high by eliminating the only competing source of supply.”

Slavery’s Decline
The Revolution disrupted Delaware’s economy, and wheat (which was less conducive to slave labor) replaced corn and tobacco as cash crops. A state law banning the sale of Delaware slaves to the Carolinas, Georgia, and the West Indies (expanded 1789 to include Maryland and Virginia), helped make slave owning increasingly unprofitable. In 1797, all Delaware slaves sold out of the state were declared automatically free.

Slave importation was finally outlawed in Delaware by the 1776 constitution, in part because the Revolutionary junta led by Caesar Rodney and his allies had seized the reins of government, in part because new slaves were no longer needed by this time. In 1789, Delaware barred slave ships from its ports.

The 1790 census showed 70 percent of the state’s black population were slaves, and slaves were 15 percent of the state’s total. Manumission (the freeing of slaves, often in the owner’s will) picked up after the Revolutionary War, as the Quakers, who were a dominant force in the northern end of the state, turned firmly against slave-owning, and the Methodists gained numbers in the state’s southern end.

Abolitionists
The language of the Declaration of Independence, and the enlightenment of equality, also helped place slavery in an ethically precarious position in the minds of many. Abolition societies formed in Wilmington and Dover in 1788 and 1789. Wilmington eventually became a nexus of the Underground Railroad, and the city’s most famous abolitionist, Thomas Garrett, was probably the inspiration for the heroic Quaker Simeon Holliday in Uncle Tom’s Cabin.

There was social pressure against manumission by whites who feared being outnumbered by free blacks, and wills that set slaves free were often contested in court. A slave was still valuable property – a young black male slave being worth about $150 in 1816 in southwestern Sussex County, where an acre of land was worth about $1.

Free Blacks
But the inability to sell slaves out-of-state and the changing agricultural practices were gradually making slave-owning less profitable in Delaware. By 1810, some 78 percent of Delaware’s blacks were free (as opposed to 63 percent in New York and 42 percent in New Jersey in the same year), and unlike other northern states, it had been done voluntarily, without legal requirements. By 1840, only 13 percent of the state’s blacks were enslaved, and slaves made up a mere 3 percent of the total population.

Delaware had, proportionally, the largest free black population of any state. This was not merely a statistical abstraction, but it was known and commented upon by the people in Delaware at the time, as in the Wilmington newspaper of 1850 that noted that Delaware “has more free colored in proportion to its population than any state in the Union.”

White employers relied on free blacks for labor, and Delaware took a coercive stance toward its free black population. An 1849 law threatened to sell free blacks into servitude for a year if they were “idle and poor” and remained unemployed. Blacks had been barred from state-aided schools as far back as 1821.

Black Codes
In 1832, the Delaware General Assembly began to pass black codes to control the lives and activities of freedmen. Soon these harsh rules made Delaware “the least hospitable place in the Union for freedmen prior to the Civil War.” The result was a migration of Delaware blacks northward in the 1850s.

An attempt to abolish slavery in the new state constitution in 1792 failed. Bills to abolish slavery were introduced in the General Assembly in 1796 and 1797. An attempt at gradual emancipation in 1803 was killed by the speaker of the state House of Representatives, who cast the tiebreaking vote. Further attempts were made, but the abolition bills generally were smothered in parliamentary procedure. By this time, the pattern had been established of antislavery New Castle County in the northern part of the state vs. proslavery Sussex County in the south.

An 1845 bill for gradual abolition was “indefinitely postponed,” but in 1847 a gradual emancipation bill that would have freed all African Americans born into slavery after 1850 made it out of committee. The House passed the bill, by a vote of 12 to 8, but it was tabled in the state Senate by one vote.

The 13th Amendment
As it turned out, Kentucky and Delaware, among the border states, continued to tolerate slavery, even after General Lee’s surrender at the end of the Civil War. Delaware’s General Assembly refused to ratify the 13th Amendment, calling it an illegal extension of federal power over the states.

Only in December 1865, when the 13th Amendment went into effect on a national scale, did slavery cease in Delaware. By then there were only a few hundred left. Many male slaves had enlisted in black regiments during the war.