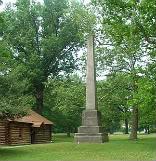 History of the Delaware Indians

Image: Gnadenhutten Massacre Monument
This 37-foot monument is located next to a reconstructed cabin in the original Gnadenhutten village in Ohio, where Delaware Indians were needlessly killed by American militia. The inscription reads: “Here triumphed in death ninety Christian Indians, March 8, 1782.”

Delaware is the English name given to several closely related Native American groups, because they lived in the vicinity of the Delaware River. They called themselves the Lenape. During the 17th century, they lived in what is now New Jersey, Delaware, eastern Pennsylvania, and southeastern New York.

Contact with Europeans
The Lenape were among the first Indians to come in contact with the Europeans (Dutch, English, and Swedes) in the early 1600s. When the settlers arrived, some Lenape were living in large villages of two or three hundred people, but most of them lived in small bands of 25 to 30 people.

According to Dutch settler Isaac de Rasieres, who observed the Lenape in 1628, the Lenape’s primary crop was maize, which they planted in March after breaking up the soil. In May, the Lenape planted kidney beans between the maize plants, which served as props for the beans. The summers were devoted to field work and the crops were harvested in August. Hunting was the primary activity during the rest of the year.

The early interaction between the Lenape and the Dutch of New Netherland was primarily through the fur trade, specifically the exchange of beaver pelts by the Lenape for European-made goods.

Many of the early Delaware land sales to the Europeans were considered more like leases by the natives. They had no idea that land was something that could be sold. The concept of owning land was alien to them. The land belonged to the Creator, and the Lenape people were only using it to shelter and feed their people. The new settlers gave a few tokens to the Delaware that they received as gifts, but the Europeans considered them as payment for their land.

The people known as the Delaware were driven ever westward by settler encroachment and governmental control. They first moved along the North branch of the Susquehanna River in Pennsylvania. They were continually pushed farther west, establishing a vast town near present day Kittanning Pennsylvania. In 1720, they were forced to move into what is now Ohio, then to Indiana. With each move they were convinced they would be safe.

The Gnadenhutten Massacre
During the Revolutionary War, the Delaware tribe of the Ohio Country was deeply divided over which side, if any, to take in the conflict. The issue was of critical importance because the Delaware villages lay in the path between the two opposing frontier strongholds: the main American military outpost at Fort Pitt (now Pittsburgh) and the British with their Indian allies around Fort Detroit (now Michigan).

Some of the Delaware in Pennsylvania and Ohio had been converted to Christianity by the Moravians. In September 1781, British-allied Indians forcibly removed the Christian Indians and the missionaries from the Moravian villages, relocating them north to a new village called Captive Town.

Missionaries David Zeisberger and John Heckewelder were taken to Fort Detroit and tried for treason by the British, who suspected them of providing military intelligence to the American Army at Fort Pitt. The missionaries were acquitted, although Zeisberger and Heckewelder were indeed keeping the Americans at Fort Pitt informed of the movements of the British and their Indian allies.

Meanwhile, the Indians were going hungry at Captive Town. In February 1782, over 100 of them returned to their old Moravian villages to harvest the crops they had been forced to leave behind. But the war was still raging, and in early March 1782, a raiding party of 160 Pennsylvania militiamen rounded up the Indians and accused them of taking part in the ongoing raids into Pennsylvania.

The Native Americans truthfully denied the charges, but the Pennsylvanians held a council and voted to kill them all anyway. Some militiamen opposed to this action withdrew from the area. The Indians, informed of their fate, spent the night praying and singing hymns.

On the morning of March 8, 1782, ninety-six Christian Indians were killed by American militia as they knelt, their skulls crushed with a mallet. Twenty-eight men, twenty-nine women, and thirty-nine children were murdered, and then scalped. The incident took place at the Moravian missionary village of Gnadenhutten in Ohio. The corpses were crowded into the mission buildings, and the town was burned to the ground. Two boys survived to tell about the massacre.

Removal
Anthony Wayne defeated and subdued the Delaware in 1794, and by the Treaty of Greenville in 1795 they ceded their lands in Pennsylvania and Ohio to the white man.

By 1820, they had crossed the Mississippi River into Missouri and, during the next forty years, produced thirteen treaties that established a reservation in Kansas, and ultimately a final move to the Indian Territory in 1866. Their 1867 agreement with the Cherokee allowed them to purchase a district to reside as Delaware within the Cherokee Nation in Oklahoma, and they have continually maintained their cultural and governmental identity.