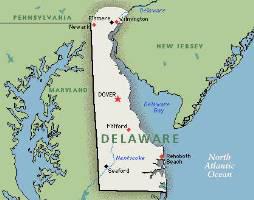 Early explorations of Delaware’s coastline were made by Samuel Argall in 1610. During a storm, Argall was blown off course and sailed into a bay that he named in honor of his governor—Lord De La Warr. In 1631, the first white settlement was made on Delaware soil, after a group of Dutchmen formed a trading company headed by Captain David Pietersen de Vries. The expedition of about 30 individuals sailed from the town of Hoorn on the ship De Walvis (The Whale). Arriving in the New World in 1632, Captain de Vries found the settlers had been killed and their buildings burned by the Indians.

The Swedes
In 1638, a Swedish trading post and colony was established at Fort Christina (now Wilmington) by Dutchman Peter Minuit and a group of Swedes, Finns, and Dutch. This was the first permanent European settlement in the Delaware Valley.

The first expedition, consisting of two ships, Kalmar Nyckel and Vogel Grip, under the leadership of Peter Minuit, landed about March 29. The location of the first Swedish settlement was at The Rocks. A fort was built called Fort Christina after the young queen of Sweden, and they named their settlement New Sweden.

The Swedes purchased lands of the Indians on the western side of the Delaware as far up as a point opposite Trenton, founded a town on the site of Philadelphia, built churches here and there, and soon presented the appearance of a happy and prosperous community. The Dutch claimed the entire Delaware Valley as part of New Netherland, and Dutch Governor Kieft had protested the Swedes’ settlement, but Sweden was too powerful a nation to be defied at that time.

New Sweden grew by immigration and spread over the surrounding country. It seemed for a time that the whole Delaware Valley would be settled and held by the Scandinavians, but the Dutch came in 1651 and built Fort Casimir where New Castle now stands, and took control of the bay. In 1654, the new Swedish governor Johan Rising seized Fort Casimir.

In 1655, Peter Stuyvesant was the governor of New Amsterdam, and he was determined to put an end to New Sweden. He entered the bay with a fleet bearing over six hundred men, and the Swedes were overtaken. New Sweden, which had existed for seventeen years, ceased to exist as a separate colony, but the people were allowed to keep their farms, and the community continued to prosper under its new government.

The conquest of New Amsterdam by the English, in 1664, included Delaware, which then became the property of the Duke of York. The Duke’s Laws were soon extended to Delaware, and the people were granted some measure of self-government.

Province of Pennsylvania
In 1681, Pennsylvania was granted to William Penn by King Charles II, and Penn’s agents soon arrived on the Delaware River. They reported to Penn that the new province would be landlocked if the colonies on either side of the Delaware River or Bay were hostile. As a result, Penn petitioned the Crown for the land on the west side of the bay below his province, which the Duke of York conveyed in March 1682.

On October 27 1682, William Penn landed in America and took possession from the Duke of York’s agents as Proprietor of the lower counties. The colonists took an oath of allegiance to the new proprietor, and the first general assembly was held in the colony.

The following year, the three Lower Counties were annexed to the Province of Pennsylvania as territories with full privileges under Penn’s famous “Frame of Government.” Penn established representative government and briefly combined his two possessions under one General Assembly.

A long dispute ensued between William Penn and Lord Baltimore of the Province of Maryland as to the exact dominion controlled by Penn on the lower Delaware. The dispute continued between the heirs Penn and Baltimore until almost the end of the colonial period.

By 1704, the Province of Pennsylvania had grown so large that their representatives wanted to make decisions without the assent of the Lower Counties and the two groups of representatives began meeting on their own, one at Philadelphia, and the other at New Castle.

Independence at Last
In 1776, at the time of the Declaration of Independence, Delaware not only declared itself free from the British Empire, but also established a state government entirely separate from Pennsylvania.

During the American Revolution, nearly 4,000 men enlisted for service from the small state. The colonial wars had built up the militia system and supplied a number of capable officers who led the troops of Delaware in all the principal engagements from the battle of Long Island to the siege of Yorktown. The only Revolutionary engagement fought on Delaware soil was the battle of Cooch’s Bridge, near Newark, on September 3, 1777.