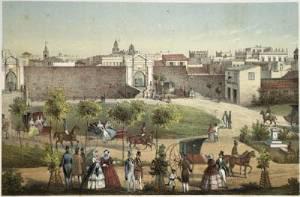 History of Slavery in Pennsylvania

In the early 1600s, the Delaware Valley was an outlying region of the New Netherland Colony on the Hudson River. It was governed by the Dutch West India Company and populated by Dutch and Swedes more interested in fur trapping than farming. It faced the same labor shortage that plagued New Netherland, and it found the same solution. African slaves were working there as early as 1639.

In 1664, the Delaware settlers contracted the West India Company “to transport hither a lot of Negroes for agricultural purposes.” The demand for slaves continued when the English assumed rule that same year. The town magistrates of New Castle, then the major settlement in the region, petitioned “that liberty of trade may be granted us with the neighboring colony of Maryland for the supplying us with Negroes…without which we cannot subsist.”

Quakers and Slaves
William Penn was granted the colony that would become Pennsylvania in 1681, and added Delaware to it in 1682. Though he flooded the area with Quakers whose descendants would later find their faith incompatible with slaveholding, the original Quakers had no qualms about it.

William Penn owned slaves, and used them to work his estate, Pennsbury. He wrote that he preferred them to white indentured servants, “for then a man has them while they live.” In Penn’s new city of Philadelphia, African slaves were at work by 1684, and in rural Chester County by 1687.

Except for the cargo of 150 slaves aboard the Bristol in 1684, most black importation was a matter of small lots brought up from Barbados and Jamaica by local merchants who traded with the sugar islands. Prominent Philadelphia Quaker families with names such as Carpenter, Dickinson, Norris, and Claypool brought slaves to the colony in this way.

By 1693, Africans were so numerous in the colony’s capital that the Philadelphia Council complained of the tumultuous gatherings of the Negroes in the town of Philadelphia. By 1700, one in ten Philadelphians owned slaves. Slaves were used in the manufacturing sector, notably the iron works, and in shipbuilding.

Not until 1696 did a large number of Pennsylvania Quakers object to slavery, and many Quaker leaders held on to their slaves until the Revolutionary War. Craftsmen who had invested time and money training their slaves opposed emancipation because they would suffer a substantial loss of property. Quaker-owned slaves worked principally on farms, but also took on a diversity of chores in the retail trades.

But by 1720, a wheat-based economy had sprung up, and the good reputation of Pennsylvania in Europe was luring Scots-Irish and German immigrants, who were willing to hire on as indentured servants in exchange for passage across the Atlantic. It is estimated that about 58,000 Germans and 16,500 Scots-Irish came to Pennsylvania from 1727 to 1754. The Quaker farmers used those servants for work on their farms. On a relatively small farm, it was cheaper than owning slaves.

The terms of indentured servitude ranged from 1 to 17 years (children served the longest indentures), with a typical one being 4 or 5 years. During that time, the worker’s labor was a commodity that could be sold or traded or inherited, on the discretion of the owner. The discipline records of the Quaker meetings cover cases of members called to account for cruelty to indentured servants, and these tales tell of servants whipped, beaten and locked up for laziness.

Wars in Europe during the 1750s disrupted immigration patterns and cut down on the indentured servant pool. From the year 1749 to 1754, some 115 ships carrying almost 35,000 German immigrants reached Philadelphia. But in 1755 and 1756, only three ships docked, and only one more arrived before 1763. The French and Indian War also drew indentured male farm workers into the military.

The Quakers again began to buy slaves. The importation of slaves into Philadelphia peaked in the years between 1759 and 1765. Pennsylvania’s slave population had risen gradually, from about 5,000 in 1721 to an estimated 11,000 in 1754. By 1766, it was believed to number 30,000. But the end of the French and Indian War opened up a fresh flood of European immigration. Slave importation fell off sharply.

Free Blacks in Pennsylvania
Not only was colonial Pennsylvania a slave-owning society, but the lives of free blacks in the colony were controlled by law. The restrictions on slaves were mild by Northern standards, but those on free African men were comparatively strict. After 1700, when Pennsylvania was not yet 20 years old, blacks – free and slave – were tried in special courts, without the benefit of a jury.

An Act for the Better Regulation of Negroes passed in the 1725-26 session, set especially high penalties for free blacks who harbored runaway slaves or received property stolen from masters. The penalties in such cases were potentially much higher than those applied to whites, and if the considerable fines that might accrue could not be paid, the justices had the power to order a free black person put into servitude.

Under other provisions of the 1725-26 act, free negroes who married whites were to be sold into slavery for life. For mere fornication or adultery involving blacks and whites, the black person was to be sold as a servant for seven years. Whites in such cases faced different or lighter punishment. The law effectively blocked marriage between the races in Pennsylvania, but fornication continued, as the state’s burgeoning mulatto population attested.

Other colonial Pennsylvania laws forbade blacks from gathering in tippling-houses, carrying arms, or assembling in companies. These, however, were loosely or unevenly enforced.

Throughout the Pennsylvania Colony, the children of free blacks, without exception, were bound out by the local justices of the peace until age 24 (if male) or 21 (if female). All in all, the free blacks of colonial Pennsylvania led severely circumscribed lives. They had little or no control over their own family arrangements, and could be put back into servitude for laziness or petty crimes, at the mercy of the local authorities.

Quakers Against Slavery
Quakers felt uneasy about slavery – in part because they had doubts about the propriety of owning another person, but also because they feared it was a luxury that marked them as worldly, and they feared Africans would be a bad influence on their families.

Pennsylvania Mennonites had expressed concerns about slavery since the 17th century, but it was only in 1758 that the Philadelphia Yearly Meeting of the Society of Friends – the Quakers – made buying or selling a slave a bar to leadership in the Quaker meetings.

Moral arguments were advanced against slave-owning, but the main motive for the Society’s shift against slavery seems to have been an internal clash of values between the few wealthy Quakers who owned the slaves and the many poor ones who did not.

The surrender of slavery was a minor disruption to most Pennsylvania Quakers’ lives. Slavery in Pennsylvania had died of the market economy long before Quaker morality shifted against it. Despite the spike in the 1760s, there was never enough critical mass of slaveholding in Pennsylvania to produce a slave-based agricultural economy.

In 1730, about one in eleven Pennsylvanians had been slaves, and by 1779 the figure was no more than one in thirty. In 1775, Anthony Benezet of Philadelphia founds the world’s first abolitionist society. Benjamin Franklin becomes its president in 1787.

The 1780 abolition law actually had more immediate impact on the free blacks than the enslaved ones. The abolition of slavery was very gradual, while it made free blacks equal under the state’s laws, removed the prohibition on interracial marriage, and allowed free blacks to testify against whites in state courts.

Although Pennsylvanians could no longer legally import slaves; they could buy and sell those who had been registered. Indeed, some pro-slavery residents of counties along the Delaware and Maryland borders violated the law and continued to buy slaves from those states until the law was tightened in l788.