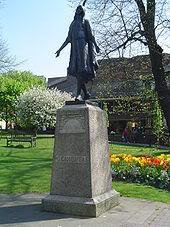 This account of Pocahontas’ life comes from Chief Roy Crazy Horse, who is the head of the Powhatan Nation today. I tend to believe his version, because it’s more realistic. What motivation could he possibly have to lie?

I’m not necessarily faulting the colonists. I’m sure they needed legends to believe in to make their lives more bearable. And that’s what I believe the story of Pocahontas we’ve heard all our lives is – a legend.

This is Chief Roy’s history of Pocahontas:

Pocahontas was her nickname, meaning “the naughty one” or “spoiled child.” Her real name was Matoaka. The legend is that she saved a heroic John Smith from being clubbed to death by her father in 1607 – she would have been about 10 or 11 at the time. The truth is that Smith’s fellow colonists described him as an abrasive, ambitious, self-promoting mercenary soldier.

Of all of Powhatan’s children, only Pocahontas is known, primarily because she became the hero of Euro-Americans as the “good Indian,” one who saved the life of a white man.

The truth of the matter is that the first time John Smith told the story about this rescue was 17 years after it happened, and it was but one of three reported by the pretentious Smith that he was saved from death by a prominent woman.

Yet in an account Smith wrote after his winter stay with Powhatan’s people, he never mentioned such an incident. In fact, the starving adventurer reported he had been kept comfortable and treated in a friendly fashion as an honored guest of Chief Powhatan and his brothers. Most scholars think the “Pocahontas incident” would have been highly unlikely, especially since it was part of a longer account used as justification to wage war on Powhatan’s Nation.

The true Pocahontas story has a sad ending. In 1612, at the age of 17, Pocahontas was treacherously taken prisoner by the English while she was on a social visit, and was held hostage at Jamestown for over a year.

During her captivity, a 28-year-old widower named John Rolfe took a “special interest” in the attractive young prisoner. As a condition of her release, she agreed to marry Rolfe, who the world can thank for commercializing tobacco. Thus, in April 1614, Matoaka daughter of Chief Powhatan, became Rebecca Rolfe. Shortly after, they had a son, whom they named Thomas Rolfe. The descendants of Pocahontas and John Rolfe were known as the “Red Rolfes.”

Two years later on the spring of 1616, Rolfe took her to England where the Virginia Company of London used her in their propaganda campaign to support the colony. She was wined and dined and taken to theaters. It was recorded that on one occasion when she encountered John Smith (who was also in London at the time), she was so furious with him that she turned her back to him, hid her face, and went off by herself for several hours. Later, in a second encounter, she called him a liar and showed him the door.

Rolfe, his young wife, and their son set off for Virginia in March of 1617, but “Rebecca” had to be taken off the ship at Gravesend. She died there on March 21, 1617, at the age of 21. She was buried at Gravesend, but the grave was destroyed in a reconstruction of the church. It was only after her death and her fame in London society that Smith found it convenient to invent the yarn that she had rescued him.

History tells the rest. Chief Powhatan died the following spring of 1618. The people of Smith and Rolfe turned upon the people who had shared their resources with them and had shown them friendship. During Pocahontas’ generation, Powhatan’s people were decimated and dispersed and their lands were taken over. A clear pattern had been set which would soon spread across the American continent.

You don’t have to believe this version of the story of Pocahontas. And it certainly doesn’t make Pocahontas any less of a heroine. Why would her descendants ruin a perfectly good legend by telling the real story? What possible motive could they have?

And then, make up your own mind.