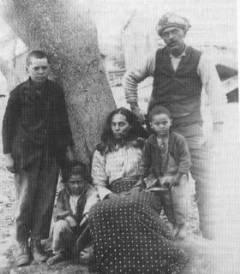 Queen of the Pamunkey Native Americans

The Pamunkey Native American tribe were the most powerful tribe in the great Powhatan Confederacy, which consisted of 35 tribes with a population of some 10,000 people under the leadership of Chief Powhatan. His territory encompassed the entire coastal plain of Virginia, from south of the James River to near Washington, DC. The chief was living among the Pamunkey when the English colonists first arrived in Virginia.

Queen Anne (ca. 1650 – ca. 1715) became the chief of the Pamunkey tribe when her aunt Cockacoeske died. Due to her authoritative position, she was always called Queen Anne by the colonists.

In 1675, Virginia Governor William Berkeley requested that Queen Anne furnish warriors to the colonists during Bacon’s Rebellion – a revolt led by Nathaniel Bacon. High taxes, low prices for tobacco, and resentment against special privileges that were given to those close to the governor provided the background for the uprising, which was precipitated by Berkeley’s failure to defend the frontier against attacks by Native Americans.

At the Colonial Council, Queen Anne scornfully rejected the request to furnish warriors to fight against the rebellion, because her people had been neglected for the past twenty years, in spite of their friendship with the white leaders. It was only after strong promises of better treatment by the colonists that Queen Anne agreed to provide the needed assistance.

Following the end of the Rebellion, the new Governor Thomas Colepeper, 2nd Baron Colepeper, presented Anne with gifts from King Charles II of England, including a silver headband or coronet that was inscribed with the words Queen of Pamunkey.

Queen Anne’s last appearance in history is in 1715, when she visited the colonial authorities to again request fair treatment for her tribe.

Pamunkey Lands
Land was considered to belong to the tribe as a whole. The chief and council allotted a parcel of cleared ground to a family head for life, and upon his death the parcel would generally go back to the tribe to be re-allotted. Differences in how land was viewed and controlled was a major source of conflict with English colonists.

Pamunkey History
There were an estimated 14,000 members of the Confederacy at the time of English arrival in 1607. Their ancestral lands were on the Pamunkey River adjacent to King William County, Virginia. The Pamunkey tribe is significant to American history because of its early contact with colonial settlers and its adaptations for self-preservation through the centuries. Native Americans have occupied this part of the mid-Atlantic coast since pre-Columbian times.

Chief Powhatan’s half brother and successor, Opechancanough, launched attacks in 1622 and 1644 to try to expel the settlers from Pamunkey lands. After the capture and assassination of Opechancanough in 1644, the Powhatan Confederacy was disbanded.

The Virginia Colony continued to grow and encroach on Indian lands, making it impossible for the natives to sustain their traditional practices. Many Pamunkey were forced to work for the English or were enslaved. As the colonial settlement grew, so did their fear of Native Americans.

This culminated in Bacon’s Rebellion, which began in 1675 as the colonists and Royal Governor William Berkeley disagreed about the handling of conflicts with the Indians. During subsequent reprisals, the Pamunkey were among innocent tribes wrongfully targeted by the colonists.

Pamunkey Way of Life
The traditional Pamunkey way of life was subsistence living – a combination of fishing, trapping, hunting, and farming. The Pamunkey River was the main mode of transportation and a food source. It also provided access to hunting grounds, other tribes, and a defensive view of river traffic. Access to the river was crucial because Pamunkey villages were not permanent settlements. Because they did not use fertilizer, they moved their fields and homes about every ten years to allow land to lie fallow and recover from cultivation.

Pamunkey structures were long and narrow, described by English colonists as longhouses. They were made from curved saplings and covered with woven mats. Homes of families of higher status were covered with bark. By changing the strength of indoor fires and the amount of mats or bark, the Pamunkey could adapt the houses to many kinds of weather conditions and remain comfortable.

Survival
Although the tribe was divided in the 18th century, many Powhatan tribes including the Pamunkey, secretly kept their identity. The Pamunkey have been able to survive because of their remarkable ability to adapt as a tribe. They have changed their interpretation of living off the land, but still uphold the central value of subsistence living. They continue to hunt, trap, and fish on what’s left of their reservation grounds.

In order to supplement these activities they have turned traditional tribal pottery into profit generating ventures, while continuing to rely on their natural environment. The pottery is made from all natural clay including pulverized white shells used by their ancestors.