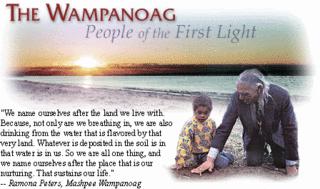 Squaw Sachem of the Wampanoag

Since Weetamoo would one day become Sachem, she would endure a vision quest. At the age of fourteen, she was sent alone into the woods and fasted until her child soul was killed. She became a skilled hunter, swimmer, and fisherman. She also learned the duties of other girls in her tribe—smoking fish, cooking, and preparing animal hides for clothing.

Puritan missionaries from Massachusetts Bay Colony began to convert the local native populations to Christianity. The converts were settled in small communities of Praying Indians at Natick, Nonantum, Punkapog, and other locations. Attendance at church was mandatory, their clothing and hair had to be changed to proper colonial styles, and even a hint of traditional ceremony and religion was grounds for expulsion. Tribal culture and authority began to disintegrate.

Death of Massasoit
In the winter of 1661, Massasoit died at the age of 81, and Wamsutta became the principal Sachem of the tribes. Weetamoo was proud and happy, and she often participated in celebrations as the most powerful woman in all of the tribes.

In a gesture of friendship and fidelity, Wamsutta and his brother Metacomet appeared before the Plymouth Grand Court and took the English names of Alexander and Philip — names appropriate to their high station among the Wampanoag peoples.

The English thought Alexander exhibited an independent attitude, and invited him to Plymouth for talks. After eating a meal in the town of Duxbury, Alexander became violently ill and died. The Wampanoag were told he died of a fever, but the records from the Plymouth Council at the time made note of an expense for poison to rid ourselves of a pest.

Weetamoo had been friendly with the Pilgrims, and had accepted some English customs. She wore makeup and jewelry like the English at Wampanoag rituals. But she believed for the rest of her life that Wamsutta had been poisoned, and she developed a deep hatred for the Pilgrims.

Metacomet succeeded his murdered brother as grand Sachem of the Wampanoag, eventually becoming known to the English as King Philip. Under his leadership, the Wampanoag attitude toward the colonists underwent a drastic change.

Repeatedly during the late 1660s and early 1670s, the Plymouth magistrates – often the victims of their own paranoia – suspected that King Philip was plotting with the French or the Dutch to attack the New England settlements. Philip denied any involvement with the French or Dutch, but he failed to convince the Plymouth officials of his innocence.

Colonists of Massachusetts
By the 1670s, there were more than 50,000 colonists living in New England, and they were steadily encroaching on land held by native peoples. Decimated by diseases Europeans brought to America in the early 1600s, the Algonquian population had fallen to about 20,000.

In 1671, ever suspicious, the English summoned Philip to Taunton, and forced him to sign a new treaty that pledged his friendship to them. They also extracted a promise to surrender his warriors’ muskets to Plymouth authorities. But not all of Philip’s men gave up their guns, and officials saw this as another threat of war.

On September 29, 1671, King Philip signed yet another treaty with the whites that brought about what he had been trying to avoid all along: the subjugation of his people under the laws of Plymouth Colony and the English king.

The English no longer needed the native’s wilderness skills to survive, and fishing and other commerce had largely replaced the fur and wampum trade that had been the mainstays of the colonial economy during the early years.

The Reverend Increase Mather captured English sentiments toward Philip and the Indians when he described the Wampanoag leader as one of the “heathen people amongst whom we live, and whose Land the Lord God of our Fathers hath given to us for a rightful Possession.”

Realizing that the English would not stop until they had taken everything, Philip was determined to prevent further expansion of English settlement, but the Wampanoag couldn’t do it by themselves. Their population was only 1,000 at that time.

Finally, Philip began to enlist the aid other tribes, but the colonists in New England outnumbered the natives more than two to one – 35,000 versus 15,000. Philip made little attempt to disguise his purpose, and through the network of Praying Indian spies the English knew exactly what he was doing.

As English encroachment continued, Philip won promises of support from the Nipmuc, Pocumtuc, and Narragansett tribes. Because they needed time to build a supply of ammunition and guns, it appears that the uprising was planned for the spring of 1676.

Meanwhile, the English saw what was coming. In January 1675, the body of John Sassamon, a Christian Indian informant, was discovered in the ice of Assowampset Pond. Three Wampanoag warriors were arrested, tried for the murder, and hanged.

Philip could no longer restrain his warriors, and amid rumors the English intended to arrest him, Philip held a council of war. Drawing from virtually every tribe in New England, Philip commanded more than 1,000 warriors, and even the tribes who chose to remain neutral were often willing to provide food and shelter.

After Wamsutta’s death, Weetamoo had married a Wampanoag named Quequequanchett. It is not known what happened to that marriage, but Weetamoo married a native named Petonowowett. King Philip was married to Weetamoo’s sister, Wootonekanuske.

Wampanoag warriors killed seven colonists in retaliation for a series of injustices suffered at the hands of the English. This raid is generally considered the beginning of King Philip’s War, a bloody conflict that would involve every New England colony and all the peoples of the Algonquian nation.

Despite being forewarned and their advantage in numbers, the English were in serious trouble. Particularly disturbing to the colonists was the defection of most of the Praying Indians. When Puritan missionaries attempted to gather their converts, only 500 could be found, and they were sent to the islands of Boston Harbor and other plantations of confinement.

Queen of the Wampanoag
Weetamoo left her husband when he sided with the English, and then married the Narraganset Sachem, Quinapin. She turned against the land-hungry colonists, and banded together with King Philip. She was very gifted in diplomatic skills, and she was successful in leading an attack against the colonists with 300 warriors.

During the following year, members of the Abenaki, Narragansett, Nipmuc, and Wampanoag tribes attacked more than half of the settlements in New England and reduced about a dozen towns in Plymouth and Massachusetts Bay colonies to ashes.

In May 1676, the Nipmuc established camps along the Connecticut River, to fish and plant crops. The English had good intelligence and, when word reached them, 150 men staged a dawn attack. They killed primarily women, children, and old people as they slept.

The Nipmuc warriors regrouped, fought back and then pursued the English, killing 39 of them. The natives’ losses were estimated at 200. The following month, the English staged an offensive and forced the Native Americans to abandon their newly-planted fields.

In July, colonists resumed their pursuit of King Philip. They captured his wife (Weetamoo’s sister) and nine-year-old son and sold them into slavery. They were placed on a slave ship bound for the West Indies.

Death of the Wampanoag
On August 6, 1676, the English and the natives who had become their allies ambushed the Wampanoag. King Philip was betrayed by one of his own men, who shot and killed him on August 12, 1676. Englishmen decapitated and quartered his body. They placed his head on a stake and marched it through the streets of Plymouth, where it remained in public view for years.

Colonists systematically hunted down the other Indian leaders, killing some of them on sight and convincing others to surrender with promises of amnesty, then executing them. Weetamoo’s husband, Quinapin, escaped but was captured and killed on August 25, 1676 in Newport, Rhode Island.

Weetamoo lost her footing while trying to escape across the Taunton River and drowned. Her body washed ashore in Swansea, an English town, and her head was cut off and displayed on a pike in Taunton.

From what has been already stated, the reader will be led to conclude that Weetamoo must have been a woman of sorrow and acquainted with grief, and yet the story of all her sufferings has not been told – the sum total of her woes culminating in her singular death. Driven from pillar to post, as she had been by the English since uniting her fortunes with those of King Philip, and particularly since the star of his martial glory had begun seriously to wane – giving evidence that it was soon to set in the interminable darkness of an overwhelming defeat – her warriors, who at the commencement of the conflict had been numbered at three hundred men, were now reduced to twenty-six.

Her lands, that a short time before were of great value, now affording her no abiding place, she fled to the Niantic country, or what is now westerly Rhode Island, where being still pursued, she was found to have gone with her little band to Mettapoisett, now Gardiner’s neck, in Swansea. While concealed in that vicinity, a deserter from her camp, repairing to Taunton, acquainted the people of that place with her forlorn condition and present location, and, Judas-like, offered to discover to them her hiding-place.

Accordingly, twenty strong men volunteered to hunt down the defenseless woman, and with the Indian traitor for their guide succeeded in surprising the camp of the distressed fugitives, capturing all save Weetamoo, who seems to have preferred death to capture; for she made one desperate effort to escape, knowing, as she did, that the “tender mercies” of Christian whites, as exercised upon red heathen, “are cruel,” and upon a raft of broken pieces of wood she took to the water, and was seen no more until her corpse, entirely naked, drifted ashore.

This was seized upon by the whites; with savage triumph the head was cut off, carried to Taunton, and set upon a pole; where being seen by some Indian prisoners, it set them into a woeful and heart-rendering lamentation. It required the hard heart of a pious divine and christian minister, the Reverend Increase Mather, to clothe this sad story in language inhuman and almost devilish.

In describing the event, he said, “They made a most horrid and diabolical lamentation, crying out that it was their queen’s head. If to lament the sad end of their queen was diabolical on the part of the Indians, what was this cruel mockery of their grief by a Christian minister, and what had the heathen to gain by listening to his teachings, or adhering to his practice?