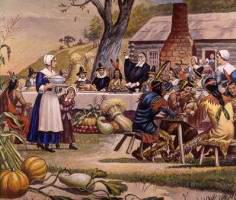 In spring 1621, the colonists planted their first crops in Patuxet’s abandoned fields. The wheat and barley did not produce well, but their corn crop proved very successful, because Squanto of the Wampanoag tribe taught them how to plant corn in hills, using fish from the bay as fertilizer.

The First Thanksgiving?
It is apparent that the Pilgrims of Plymouth Colony had some sort of celebration after their first crops were harvested in the autumn of 1621. It was probably held in early October 1621 and was celebrated by the 51 surviving Pilgrims, along with Chief Massasoit and 90 of his men. Only two written accounts exist—those of Edward Winslow and William Bradford, and I have no reason to doubt them.

We set last spring some twenty acres of Indian corn, and sowed some six acres of barley and peas. According to the manner of the Indians we manured our ground with herrings (alewives) which we have in great abundance and take with great ease at our doors. Our corn did prove well, and God be praised, we had a good increase in Indian corn. Our barley did indifferent good, but our peas not worth the gathering. We feared they were too late sown. They came up very well and blossomed, but the sun parched them in the blossom.

Our harvest being gotten in, our Governor sent four men on fowling, that so we might, after a special manner, rejoice together, after we had gathered in the fruits of our labors. They four in one day killed as many fowl as with little help besides, served the Company for almost a week, at which time, amongst our recreations, we exercised our arms, many of the Indians coming amongst us, and amongst the rest their great king the Massasoit, with some ninety men, whom for three days we entertained and feasted.

They went out and killed five deer, which they brought in to the Plantation, and bestowed on our Governor, and upon the Captain and others. Although it not always be so plentiful as it was at this time with us, yet by the goodness of God, we are so far from want that we often wish you partakers of our plenty.

We have found the Indians very faithful in their Covenant of Peace with us; very loving and ready to pleasure us. Some of us have been fifty miles into the country by land with them. There is now great peace amongst us; and we, for our parts, walk as peaceably and safely in the woods here as in the highways in England.

I never in my life remember a more seasonable year than we have enjoyed. If we have but once kine, horses and sheep, I make no question but men might live as contented here, as in any part of the world.

The country wanteth only industrious men to employ, for it would grieve your hearts to see so many miles together with goodly rivers uninhabited, and withall to consider those parts of the world wherein you live to be seven greatly burdened with abundance of people.
~Mourt’s Relation

They began now to gather in the small harvest they had, and to fit up their houses and dwellings against winter, being all well recovered in health and strength and had all things in good plenty. For as some were thus employed in affairs abroad, others were exercised in fishing, about cod and bass and other fish, of which they took good store, of which every family had their portion.

All the summer there was no want; and now began to come in store of fowl, as winter approached, of which this place did abound when they came first (but afterward decreased by degrees). And besides waterfowl there was a great store of wild turkeys, of which they took many, besides venison, etc. Besides they had about a peck of meal a week to a person, or now since harvest, Indian corn to the proportion. Which made many afterwards write so largely of their plenty here to their friends in England, which were not feigned but true reports.
~of Plymouth Plantation

I think that says all that needs to be said about that gathering, no matter what we call it. How has it all become so complicated? Why do we have to read conflicting articles about that event every year as our Thanksgiving holiday approaches? The Pilgrims themselves told us exactly what happened.