Inventor of Night Signal Flares for the U.S. Navy 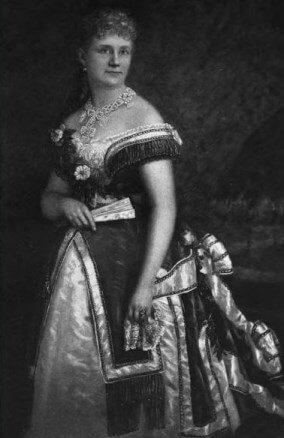 Martha Hunt Coston was born in 1826 in Baltimore, and moved to Philadelphia with her widowed mother, brothers, and sisters in the 1830s. At the age of 16, Martha eloped with Benjamin Franklin Coston, a promising young inventor.

The young couple were living a charmed life. Benjamin was appointed Master in the Naval Service and placed in charge of the Naval Laboratory in the Washington, DC. During this time, he developed a cannon percussion primer. A dispute arose between Benjamin and the Navy, concerning compensation he was to receive for their use of his primer. This disagreement eventually led to his resignation in August 1847.

Coston then accepted the position of president of the Boston Gas Company, where he perfected and manufactured the Sylvic Gas Light. He had already experienced some health problems caused by the inhalation of chemicals he had used in experiments at the Navy Yard.

The process he used of generating gas from rosin further exacerbated his condition. The improvements he made with gas lighting were a major success in home and commercial lighting, but the toxic effects of the chemicals he used proved fatal. He died in November 1848, leaving Martha and three young children and nearly destitute.

Shortly after her husband’s death, Martha began sorting through her husband’s papers. In her autobiography, A Signal Success, she wrote:

At last I came upon a large envelope containing papers and a skillfully drawn plan of signals to be used at sea, at night for the same purpose of communication that flags are used by day. This chart was colored and showed that to each signal was attached a number and letter, explanatory of the particular colored fire used. My course lay clear before me. I saw the immense value of the invention.

My old friends in Washington were greatly interested in my efforts to make known my husband’s invention, and insisted on entertaining me in their homes until further steps could be taken.

Just at this time of suspense and anxiety my second child, a beautiful boy, strikingly like his father and named after him, was taken ill, and after a long and painful illness expired.

It would consume too much space for me to go into all the particulars of my efforts to perfect my husband’s idea. The men I employed and dismissed, the experiments I made myself, the frauds that were practiced upon me, almost disheartened me.

I had finally succeeded in getting a pure white and a vivid red light, but a third color was essential. Blue I had set my heart on, in order to use the national colors, but I could not obtain it of equal intensity and strength with the other colors, and, considering the long distances at which these signals needed to be seen, this was a primary consideration.

As the months rolled on I grew desperate. I had eked out my little means as well as I could and now I stood face to face with penury. My children, lovely and good, were growing fast, and had other needs than those of clothes and food, and my determination to succeed grew with the obstacles that arose.

At this time the whole country was in a ferment over the successful laying of the Atlantic cable, and tremendous was the excitement on the day when the first cable dispatch flashed under the sea from Queen Victoria to President Buchanan.

Cyrus W. Field received a great ovation in New York City, and at night there was a grand display of fireworks, which took place from the City Hall. Fiery portraits of the Queen and the President, wreaths, rockets, Roman candles, banners, eagles, wheels, showers of colored stars, and finally ships of fire were represented paying out cables of highly-tinted lights.

This display suggested to me that among the New York pyrotechnists I might find some one capable of helping me. I opened communications with several of them, under a man’s name, fearing they would not give heed to a woman, asking for a strong, clear blue or green light, but not saying for what purpose I wished to make use of it.

One man in an intelligent reply said he had several years before invented a pure blue, but threw it on one side on account of its being too expensive for ordinary use. I replied urging him to recover the color if possible; if not, to try green.

In ten days, I received a package at my country house near Philadelphia, containing the desired colors, and I persuaded a friend to drive to a mountain some five miles distant, and burn them to show me the color. The trial was a success; the green fire brilliant and intense. I at once entered into negotiations with the pyrotechnist, and having received satisfactory references took him into my confidence, and engaged him to make further experiments.

By 1859, the success of the signal was well documented by a specially appointed board of Naval Examiners by Navy Secretary Toucey. After a month long testing period, a report was published in February, 1859. In brief summary, the report contained three main points: (1) Coston signals are better than any other known to them; (2) the Board strongly recommend them for the use of the navy; and (3) Signals being the means whereby orders are given, or wants made known at sea, a good code of them plainly intelligible to the persons addressed is absolutely necessary to the efficient conduct of a fleet.

Despite an agreement to do so, the Navy did not purchase the patent. During the next two-year period from 1859 until the beginning of the Civil War, the U.S. Navy delayed the purchase with stall tactics. The Navy did order and continued to buy large orders of sets, each set consisting of 12 flares.

While the issue of purchasing the Coston patent was under debate in Congress, Coston decided to market her flares in Europe. She set sail for England in August, 1859. She secured patents in England, France, Holland, Austria, Denmark, Italy and Sweden. She remained in Europe until 1861, traveling back and forth between London and Paris occupied in negotiations with the British and French governments for the purchase of her patent.

When the Civil War broke out, Coston returned home and went directly to Washington, DC, to push the bill before Congress for the sale of the patent. She firmly believed that her signals would prove a ‘valuable auxiliary’ for the Navy and “the night would lose half its terrors at sea, when in the darkness and through the storm ships could talk to each other.”

Although Congress still had not purchased her patent, the Coston factory quickly furnished flares to the first 600 ships the Union outfitted. Finally, authorized by an Act of Congress on August 5, 1861, the U.S. Navy acquired the patent. Martha Coston originally asked $40,000, the Senate reduced it to $30,000, and finally she received $20,000 for the patent.

During the Civil War, the Coston Manufacturing Company supplied the signals at cost to the Navy, which meant selling at a loss due to wartime inflation of the cost of materials. Numerous documents show the extensive use of the Coston signal flare between 1861 and 1865 by the U.S. Navy.

After the Civil War, the Coston flare was used heavily by the U.S. Lifesaving Service, the forerunner of the United States Coast Guard. It was the main nocturnal signaling device used up to the mid-20th century. 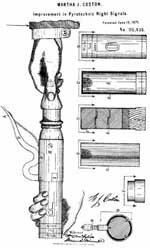 In 1871, Coston received a patent for an improvement that was uniquely her own, a twist-ignition device.

She sold her signals to navies, shippers and yacht clubs around the world. The pyrotechnic formula she developed is still the basis for flares used today. But she always had to be ‘ready to fight like a lioness’ against chauvinism. As a woman, she was constantly ignored or underpaid. Yet Coston persevered, and became living proof that a woman could be an inventor in any situation.

Congressional records dated until as late as 1876 show that Coston made repeated attempts to get compensation promised her by the Navy for selling the flares at cost for most of the Civil War. I found no record to indicate whether she ever received the promised payment.