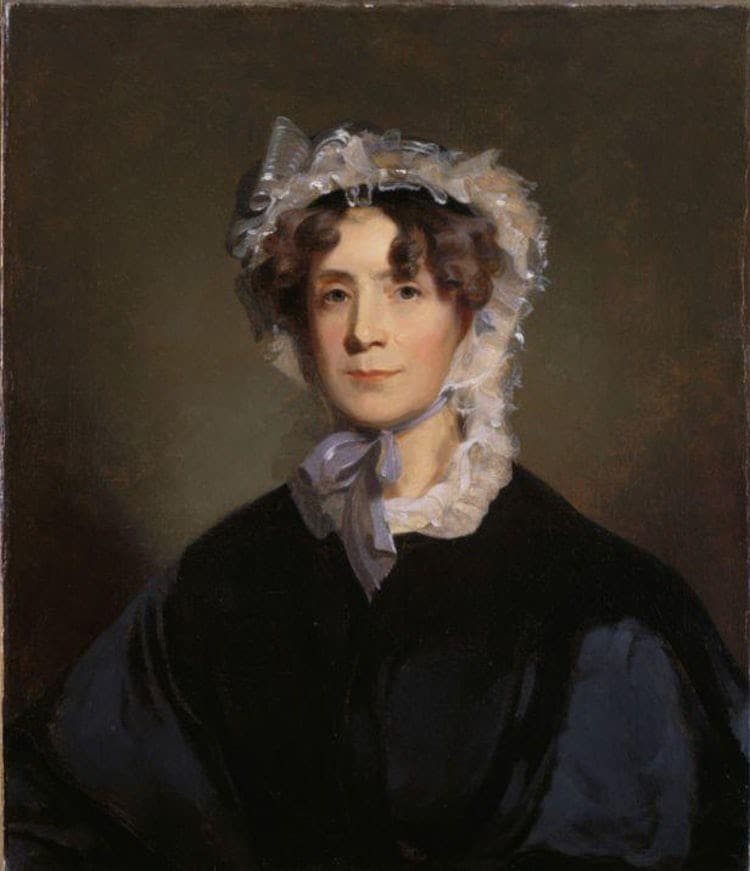 Martha Washington Jefferson was born on September 27, 1772, the daughter of Thomas Jefferson, third President of the United States, and Martha Wayles Jefferson. She was born at Monticello, near Charlottesville, Virginia, and was named in honor of her mother and of Martha Washington, wife of George Washington. Her nickname was Patsy.

When Patsy was ten years old her mother died, and over the following years she became increasingly close to her father. From age 12 to 17, Patsy and her younger sister Polly lived in Paris with her father while he served as U.S. Minister to France. Jefferson enrolled the girls at Abbaye Royale de Panthemont convent school, after receiving assurances that Protestant students were exempt from religious instruction. After Patsy expressed a desire to convert to Catholicism, Jefferson quickly withdrew them from the school.

While in Paris, Patsy grew tall and slim with red hair and freckles, closely resembling her father. She emerged as a cultivated young lady, well educated and experienced in the arts; in 1789 she was brought out into Paris society, surrounded by suitors, at the court of Louis XVI. She was an accomplished dancer, harpsichord player and horsewoman.

On February 23, 1790, Patsy returned to Virginia and married Thomas Mann Randolph, her second cousin and a recent graduate of the University of Edinburgh. The couple lived at Randolph’s Virginia plantation, Edgehill, near Monticello.

The couple had 11 children:

Like her father, Patsy took the education of her children seriously, establishing a school on the grounds of her home to educate them in “mathematics, history, literature, music and languages.” She was also very devoted to her father.

When Jefferson was elected President of the United States, he had been a widower for 19 years. Therefore, he took charge of the entertaining details at the White House, particularly the food and the form of protocol and ceremony. Whenever he had women dinner guests, he invited Dolley Madison, the wife of his highest-ranking Cabinet member, Secretary of State James Madison, to serve as his escort.

Patsy Randolph has often been incorrectly identified as the White House hostess during the eight-year Jefferson presidency (1801-1809). She was not present at either of his inaugurations in 1801 and 1805 and made only two lengthy stays with her father in Washington – the winter of 1802 and the winter of 1806. Her mother’s name appears on the White House’s official list of First Ladies, although she had been dead for many years prior to Jefferson’s presidency.

Engrossed in the care of her growing family, she spent almost his entire time in the White House at either Monticello or Edgehill. She bore four of her twelve children during her father’s administration. During her second visit to Washington, she gave birth on January 17, 1806, to her eighth child, James Madison Randolph; thus he became the first child born in the White House.

Both Thomas Mann Randolph and John “Jack” Eppes, the husbands of Jefferson’s daughters, lived in the White House with their father-in-law during their terms as U.S. Congressmen from Virginia.

Patsy’s sister Polly Eppes died at her Virginia plantation, Eppington, during the Jefferson presidency on April 17, 1804, just eight weeks after giving birth to her third child, thus dying shortly after childbirth as had her mother and maternal grandmother.

Largely through their correspondence, but also during his lengthy visits home, Patsy Randolph became her father’s comfort and close advisor, perhaps the single most important personal factor that stabilized him during his presidency.

When the newspaper story that Jefferson and his half-sister-in-law and Monticello slave Sally Hemings had children out of wedlock was first widely reprinted in early 1802, Patsy immediately joined her troubled father in Washington, along with her two children and sister Polly Eppes, as a sign of family unity. Patsy tried to protect Jefferson’s reputation among her children from the rumors about a relationship with Hemings, one of five children sired by Patsy’s grandfather, John Wayles.

The usually non-churchgoing Jefferson also suddenly began publicly appearing at the Sunday religious services then held in the hall of Congress – always politically shielded by the presence of his two daughters and two grandchildren.

After her father retired from public life in 1809 Patsy moved to Monticello with him, along with her husband and children. There she presided as mistress of the house even while her husband served in Richmond as governor of Virginia from 1819 to 1822.

Thomas Randolph had always looked after Jefferson’s concerns when Jefferson was absent and shared many interests with his father-in-law, including the classics and science, which he had pursued at the College of William and Mary and at Edinburgh University. He applied his studies to scientific agriculture experiments and became a respected botanist.

But Randolph became estranged from his father-in-law and his own family after returning from service as a colonel in the War of 1812. His financial and personal affairs continued to deteriorate. The financial difficulties of both her father and husband were a continual strain on Martha.

Thomas Jefferson died on July 4, 1826, at Monticello. He had described Patsy as the

and, shortly before his death, remarked that the

“last pang of life was parting with her.”

Patsy inherited Monticello from her father, as well as his many debts.

Patsy fled from Monticello with two of her children to escape the violent abuse of her alcoholic husband. Patsy initially lived in Boston with her daughter Ellen and her husband, Joseph Coolidge. Although estranged from her husband in the last years of their marriage, Patsy returned to Virginia to care for him in his final days; he died in 1828.

Due to the heavy debts incurred by the late president Patsy was forced to sell Monticello in 1831, including her father’s slaves. She lived with her children for the rest of her life, in Boston and later in Washington, DC. She was a guest of President Andrew Jackson in the White House on several occasions.

At one point a group of Democratic Congressmen, loyal to Jeffersonian principals, considered proposing a pension for the impoverished Mrs. Randolph as a sign of respect for her late father, but none was made. South Carolina and Louisiana, however, awarded her cash gifts totaling $20,000, which she accepted.

In 1834, Patsy dictated an informal addendum to her will, instructing her children that she wished that her half-aunt Sally Hemings would be given her freedom, but that would also mean that, according to state law, the now-elderly mistress of Jefferson would be forced to leave Virginia. It became moot since Sally Hemings died a year before Patsy.

Martha Jefferson Randolph died on October 10, 1836, at the age of sixty-four, and is buried with her parents at Monticello.