Magdalena Poulle was born in Calais in northern France in 1632 and was christened in Amsterdam in 1644. She grew up with five brothers and one sister in a wealthy merchant family. Magdalena married twice and both times widowed, with no children. In 1680 she bought the ruin of a manor house called Gunterstein near the village of Breukelen in the province of Utrecht in the Dutch Republic, which had been devastated by the French invasion in 1672. The purchase of this house allowed Magdalena the title “Lady of the manor of Gunterstein and Tienhoven” a privilege she perhaps sought out since no new titles for nobility were being created at that time. By 1681 Gunterstein was rebuilt and the gardens were being planned which included an orangery. She seemed to have a great pride in owning this manor and a desire to stamp her name on her new home as many family relics can still be found around the house today; her family shield – a chicken being chased by a dog-still rests above the windows outside, the brass door knocker is of a chicken (Poulle translates to chicken from French) and is inscribed with her initials, a portrait of Magdalena and her nephew Pieter at the age of three still hangs above the mantelpiece where it was originally installed in 1683. Magdalena also left the house to Pieter her nephew as it was important to her to keep Gunterstein in the family. It remains in the family today.

Palaces and grand manor houses are traditionally placed in the center of the gardens, however Gunterstein’s location on the Vecht River meant following the norm was not possible. Gunterstein was planned on a triangular piece of land off the Vecht River. The house actually takes up a small amount of real estate with the various gardens surrounding it. Compartmentalised gardens were a Dutch fashion and as such were generally separated by canals. An ornamental garden, orchards and an orangery were established close to the house. There were bosquets (formal plantation of trees), fish ponds, and a labyrinth on the grounds as well. Behind this formality were natural grasslands that blended into the neighboring agricultural landscape.

Magdalena came up with the ideas for her gardens and based them on the prevailing French style. She used her knowledge of French culture in the creation of two fountains. La Fontaine du Dragon alludes to the story of the garden of Hesperides, while the second, La Fontaine de la Poulle refers to a fable of La Fontaine where she replaces acrow with a chicken and a fox for a dog. La Fontaine de la Poulle is a chicken spurting water on a high grotto pedestal, being chased by a dog. La Fontaine dela Poulle is interesting for its technology; a gutter or trough near the attic window of the house was used as a reservoir for the fountain. When Magdalena wanted to impress her guests she had a servant pull the cap off the reservoir which sent water rushing through a pipe and shot out of the beak of the chicken. The fountain would spurt water until the reservoir was empty.

Poulle’s gardens were very influential. They attracted the attention and visitations by prominent gardeners, botanists and collectors. She used prints of the latest French gardens to create her own garden designs, as well as, garden furniture, statues and features. Features such as small mounded green islands topped by viewing pavilions, arbours made of fine trellis work, and a statue adorning a cornfield, were all considered fashionable and popular. “In 1685 the Bishop of London, Henry Compton, sent his head gardener, George London, on a trip to the Dutch Republic to view and report back on gardening innovations there. One of the gardens he visited was Magdalena Poulle’s where he compiled an inventory of the rarest and most remarkable plants he saw there, headed: ‘These elegants which stand together in the garden of the Lady of Gunterstein at Breukelen in the province of Utrecht’. They included a coconut palm, Sesbania grandi flora (a shrub from Kerala with edible leaves and flowers), acoral tree from Brazil, sugar cane, carob, a clematis from Argentina or Paraguay, Fritillaria crassa (one of the fritillary family much featured in Dutch flower still-lifes), Leonurus Capitis Bonae Spei (from the Cape of Good Hope), hibiscus, delphinium, Thlaspi sempervirnens et florens (from Persia), papaya and tamarind. All or most of these needed special conditions for successful raising, and indeed the hothouses at Gunterstein set a standard for those at the Physic Garden in Chelsea.”
In 1686 John Evelyn (famous English writer and gardener) made a list of the most famous gardens inthe Dutch Republic, and Magdalena’s garden was on the list along with the Leiden Hortus Botanicus.

Magdalena was deeply involved in the creation of all her gardens and she held a passion for being amongst the first to bring in exotic plants. Most especially, she had built the orangery (greenhouse) and its state-of the art hothouses in order to do this. Magdalena had developed a number of contacts through which she was able to learn about the latest explorations. She sent out her own search parties across the world for unknown exotics only die-hard collectors needed to have. In order to raise her new exotic plants she needed a hothouse. Fortunately for her the Dutch were already looking into improving the hothouses that existed. Magdalena’s hothouses were a breakthrough in a new technical science which allowed for great strides in the cultivation of exotics. Early hothouses were too dry for the tropical exotics, but a system of brick ducts under the floor provided horizontal heating or through ducts in the wall by vertical heating, changed the future of heating greenhouses or orangeries. The improved hothouse became a status symbol and was soon to be found in the gardens of other botanical collectors in the Republic. Magdalena lovingly raised her exotics in the hothouses over the winter and then displayed them in urns, with great extravagance, on the terraces through the summer. In keeping with her desire to be remembered Magdalena commissioneda book of fifteen etchings called Veuesde Gunterstein (c. 1690) and dedicated it to Madame de Gunterstein et de Thienhoven. The works were made by artist Willem Swidde and contains etchings of Gunterstein and its gardens. Similar series of house and garden views had been made for members of the court and for the gardens of the Stadtholder at the palace of Het Loo in Apeldoorn (built between 1684 and 1686). 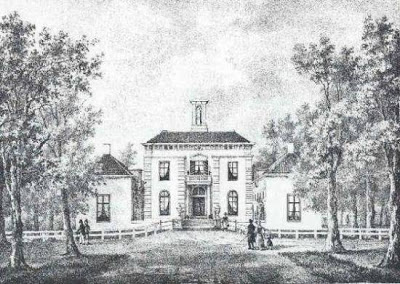 After Magdalena’s death in 1699 her brother put up her orangery collection for auction.

“The plants are superficially described as Orange, Lemon, Myrtus, Jasmin, Camphor, Arbutus and double Oleander trees, and the text mentions besides these many strange foreign tree fruits, plants, roots an bulbs, in many years collected from many far-off parts of the world.”

What a shame that her family had no interest in her collection, especially when considering that all she had built and assembled was for the long term benefit of the family. A long line of descendants have lived in Gunterstein and the home and gardens are open to the public on specific days. Today Gunterstein’s gardens are much reduced and the original 17th century ornamental gardens along with the Fontaine de la Poulle are gone.