Daughter of Frederick Philipse III, Mary Philipse was born at the Manor Hall, on July 3, 1730. Her father, whose family emigrated to Manhattan in the mid-17th Century from Holland, was lord of the manor of Philipsburgh, and owned an immense landed estate on the Hudson River at present-day Yonkers. He also served as Speaker of the New York Colonial Assembly.

George Washington was a Virginia Colonel, 24 years of age, who had just won his first laurels on the field of battle. On his way to Boston to meet General Shirley, he stopped in New York and called at the house of Colonel Beverly Robinson, one of Washington’s friends from Virginia.

There Washington met Miss Mary Philipse, who was visiting the Robinsons – her sister and brother-in-law – during the winter months. Mary was well educated and enjoyed all of the advantages that society offered. She was described as having great personal beauty, with dark eyes and hair, strong-willed yet of a kindly disposition.

George’s young heart was touched by her charm and beauty. He left reluctantly, continuing on to Boston. On his return he was again a guest at the Robinson home. He remained there, in Mary’s company, as long as duty would allow.

Speculation is that he offered her his hand but was refused, but the most probable version of the story is that he was called away by his public duties before he was able to make sufficient overtures into the lady’s heart. Truth was that Washington’s time was taken up almost entirely by military matters.

Shortly thereafter, Washington heard that Roger Morris, a captain in the British army, had won Mary’s hand. Captain Morris and Mary Philipse were married in the Manor Hall in the midst of a distinguished company on January 19, 1758. The wedding was one of the social events of the season. They would have traveled by sleigh from New York City to the family mansion, which stood at the center of a 57,000 acre estate in present day Yonkers, New York.

In 1765, when Roger Morris, whose city house was at the corner of Whitehall and Stone streets, saw this advertisement in the New York Mercury, and he wanted it:

A Pleasant situated Farm, on the Road leading to King’s Bridge in the Township of Harlem, on York Island, containing about 100 acres, near 30 acres of which is Woodland, a fine piece of Meadow Ground, and more easily be made: and commands the finest Prospect in the whole Country: the Land runs from River to River: there is Fishing, Oystering, and Claming at either end…

So he bought the offered land, and by the summer of 1766 he had completed the sturdy Georgian country house in what is today upper Manhattan. The breezy hilltop location was ideal for the family’s summer home. Known as Mount Morris, this northern Manhattan estate stretched from the Harlem River to the Hudson River. The house is still standing near 160th Street, and looks down on the city that has grown to it and beyond it.

For nine years, Roger Morris and his family lived in the mansion. As a member of the Legislative Council, much of his time was given to the interests of his fellow citizens. But as time passed, he fell out of sympathy with his neighbors. They demanded war with Great Britain, and he felt that he could not join the revolt. Yet he refused to fight against the patriots. 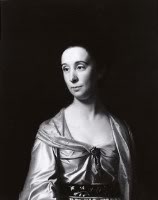 In 1775, Roger Morris declared that he was loyal to England and the King and sailed for England, leaving the property in the care of Mary Philipse Morris. She kept the house open for a while, but with war festering around her, she eventually abandoned the property. She and her children moved to the Philipse Manor House at Yonkers, and the Morris house was confiscated by the New York state legislature.

During the Revolutionary War, the hilltop location of the Morris Mansion was valued for its views of the Harlem River, the Bronx, and Long Island Sound to the east, New York City and the harbor to the south, and the Hudson River and Jersey Palisades to the west, and proved to be a strategic military headquarters.

On September 14, 1776, General George Washington decided to abandon New York City to the British. He planned to go to Harlem, to the fort that had been prepared for just such an emergency. On September 15, he took possession of the Roger Morris house as his temporary headquarters between September 14 and October 20, 1776.

On November 16, 1776, Washington was at Fort Lee on the New Jersey shore. He wanted to view the British operations in their attack on Fort Washington, so he crossed over to the Morris house. Fifteen minutes after he left the house to return to New Jersey, 14,000 British and Hessian troops took possession of the Morris Mansion and Fort Washington.

Philipse Manor Hall
Philipse Manor Hall, dating back to 1682, still stands in its original location. It is the oldest building in Yonkers, having survived the Native American, the Dutch, and the English periods of its history.

In December, 1776, he was permitted to return to the Manor House upon giving his parole that he would not give aid or intelligence to the enemy. But the following year, he left the Manor House, went to his town house in New York City, which was then in possession of the British, and never returned. He was therefore adjudged to have broken his parole.

In 1779, the Philipse Manor House and lands were declared forfeited because the owner refused to take the oath of allegiance to the Colonies, and Frederick Philipse III went to England. The New York State Legislature decreed that the Philipse land was to be sold in plots not to exceed 500 acres.

Fredericks Philipse’s convictions also led him to declare his loyalty to the King of England, and on June 29, 1776, he was served with a summons to appear before the committee on disaffected persons to clarify his position. He sent an evasive reply by letter, and was left alone until August 9, when General Washington ordered that he be taken into custody. He was then taken to Middletown, Connecticut, and detained there.

In 1783, Mary Philipse Morris left for England with her four children. Roger Morris died in 1794, but Mary lived for another 31 years.

Mary Philipse Morris died in 1825, at the age of 96, and was buried beside her husband in York, England.