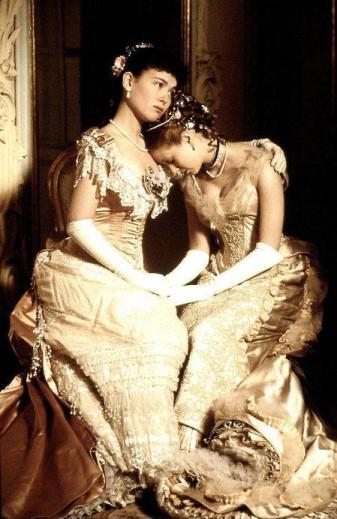 A romantic friendship is a very close but non-sexual relationship between same-sex friends who often shared a degree of physical closeness like kissing, hugging, holding hands, and sharing a bed. Such friendships offered emotional support and companionship in a society where women had few freedoms. Many of these women later left the romantic friendship and married men.

Women in romantic friendships usually lived together, in a world where women had few choices as to where they must live. As long as they remained single and had no other arrangements, they were forced to live with a male family member – father, brother, uncle, nephew, cousin. As they aged, they were often shuttled from household to household, never feeling welcome anywhere.

Frances Shimer and Cinderella Gregory
Frances Ann Wood was born August 21, 1826 in Milton, New York. At the age of seven, she enrolled in a boarding school but returned home to care for the Wood family farm and her aging father when she was twelve. By the age of 14, Shimer was teaching in local schools.

Throughout these early teaching years, she saved her income from teaching and farming to pay for her future studies. She wanted to be a doctor but was unable to find any medical school that would admit women. She therefore sought further education as a teacher.

Shimer eventually sold the family farm, and she and her father moved into the spacious Nash boarding house. While living there, Shimer met Cinderella Gregory, who was also teaching in the area.

The education reform movement advocated state-supported normal schools (for training teachers) had begun in New England in 1839, and the New York state legislature followed in 1844. The state normal school granted Shimer a full scholarship on the recommendation of her local superintendent, and she entered the school in 1848. She completed the two-year course in one year so she could graduate in the same class as Cinderella Gregory. They both graduated in 1849.

The women continued to teach at schools in New York but were unable to find permanent positions due to the oversupply of teachers. Shimer began to suffer from tuberculosis and sought a change of climate. She and Gregory corresponded with officials in several Midwestern towns, looking for teaching positions.

There is scant evidence of a romantic friendship between Shimer and Gregory, but it is highly likely that they shared living quarters during their many years together.

While romantic friendship had had a long history in Western civilization, it took on particular significance in nineteenth-century America, where men’s spheres and women’s spheres became so divided through the task of nation-building. Men saw themselves as needing the assistance of other men to realize their great material passions, and they fostered “muscle values” and “rational values,” to the exclusion of women. Women, left to themselves outside of their household duties, found kindred spirits primarily in each other.

Mount Carroll Seminary
In 1852, the pioneer town of Mount Carroll, Illinois incorporated the Mount Carroll Seminary with no land, no teachers and no money, but they succeeded in persuading Frances Ann Wood Shimer and Cinderella Gregory to come and teach. On May 11, 1853, the new seminary opened in the local Presbyterian Church with eleven students.

The seminary’s founders were unable to raise sufficient funds locally, so they borrowed money to construct a building. They were discouraged by the school’s finances and sold it to Wood and Gregory in 1854. From then until 1870, Shimer ran the school as a partnership with Cinderella Gregory, who served as the chief academic officer. Shimer handled finances and other non-academic duties. It was unusual for the time to have a school governed entirely by women.

A pioneering institution in its time and place, the Mount Carroll Seminary also served as a center of culture and education in 19th-century northwestern Illinois. In 1864, the overcrowded school began accepting female students only.

In 1855, the school still occupied only one building. Through Shimer’s efforts and her careful management of finances, the school expanded to a 25-acre campus with four connected buildings and numerous outbuildings. Shimer was planning a major expansion of the school, but the Panic of 1857 intervened. In December 1857, Frances Ann Wood married local naturalist Henry Shimer, who earned a medical degree from Chicago Medical College in 1866 and taught classes at the seminary. He was also a respected entomologist. The Shimers lived in separate quarters throughout their marriage.

In 1870, Cinderella Gregory left the school to get married and sold her interest in the Seminary to Shimer, who became the sole owner and manager of the school from 1870 until her retirement in 1896.

In 1872, Shimer invited Adelia Joy to come to the Seminary as Associate Principal for one year; she stayed twenty-five years. But the school remained Shimer’s sole property until she relinquished control in 1896.

Shimer began to spend the winters in DeLand, Florida in the 1880s; she established an orange plantation there. Much of the orchard’s harvest was shipped to Mount Carroll Seminary to provide food for students, to supplement that of farms closer to Mount Carroll.

In 1895, Shimer’s husband, Henry Shimer committed suicide five days after he had executed a new will, leaving his wife with his entire fortune of approximately $200,000. He left nothing to his mother and surviving sister. The Shimer family successfully contested in a trial that drew hundreds of spectators each day.

In 1896, Frances Shimer transferred control of the Mount Carroll Seminary to a Board of Trustees in affiliation with the University of Chicago, and the school was renamed the Frances Shimer Academy.

Frances Shimer died November 10, 1901; her body was returned to Mount Carroll for burial in the Oak Hill Cemetery.

The End of Acceptance
By the early 20th century, women had access to quality higher education, which gave them new opportunities. A culture of romantic friendship was fostered in women’s colleges. Older students mentored younger ones, called on them socially, took them to all-women dances, and sent them flowers, cards, and poems that declared their undying love for each other.

These were written about quite frankly in stories for girls aspiring to attend college in publications such as Ladies Home Journal, a children’s magazine titled St. Nicholas, and a collection called Smith College Stories, without negative views. Enduring loyalty, devotion, and love were major components to these stories, and sexual acts beyond kissing were consistently absent.

The label ‘New Women’ referred to women who had the option of establishing a career instead of marriage. Historian Lilian Faderman calls this period “the last breath of innocence” before 1920. Specifically, Faderman connects the growth of women’s independence and their beginning to reject strictly prescribed roles in the Victorian era.

Women in romantic friendships realized that they were participating in behavior that could be viewed as lesbian, and they began to deny or conceal those relationships. They discouraged young women from engaging in “abnormal” friendships and insisted happiness could only be attained with a man.

In 1895, Woolley began teaching biblical history at Wellesley College. She was popular among her students and peers and in 1896 she was made an associate professor. By 1899, she had been promoted to a full professor. She made significant changes in the curriculum while gaining administrative experiences as the chair of her department.

During her time at Wellesley, Woolley met Jeanette Augustus Marks, then a student at Wellesley. Beginning in 1899, the two women lived in a life-partnership for forty-eight years.

In December 1899, Brown University asked Woolley to become the head of the new Women’s College. About that same time, Mount Holyoke College offered her a job as its president. Woolley accepted Mount Holyoke’s offer and on January 1, 1901 she became one of the youngest college presidents in the United States at the age of 38.

In 1933, some male members of the Board Of Trustees to insure that when Woolley would be replaced by a man when she retired. The members who supported this approach believed that with most of the departments headed by women and the male faculty only a small minority that Mount Holyoke had become “overfeminized.”

After Ham was appointed, some alumni attempted to rouse sufficient opposition to convince Ham to refuse the appointment but official Mount Holyoke closed ranks and the opposition was defeated. Woolley and her allies did have the “last word” at the college’s centennial celebration in May 1937. Ham was not invited to attend and many of the speeches decried the actions of the Board of Trustees. After her retirement, Woolley never visited the Mount Holyoke campus again.

After her retirement in 1941, Marks and Woolley moved permanently to Marks’ childhood home, Fleur De Lys, on Lake Champlain in New York. Woolley remained an active social advocate during her retirement, and she spent much of her time lecturing at meetings and conferences.

On September 30, 1944, Mary Emma Woolley suffered a cerebral hemorrhage which partially paralyzed her. She spent the final three years of her life in a wheelchair and Marks cared for her until her death in 1947.

This poem was written by a girl to her female schoolmate in Margaret Constance Dubois’ story “The Lass of the Silver Sword,” which was published in the children’s magazine St. Nicholas: An Illustrated Magazine for Young Folks (December 1908):

My love has a forehead broad and fair,
And the breeze-blown curls of her chestnut hair
Fall over it softly, the gold and the red
A shining aureole around her head.
Her clear eyes gleam with an amber light
For sunbeams dance in them swift and bright!
And over those eyes so golden brown,
Long, shadowy lashes droop gently down…
Oh, pale with envy the rose doth glow!…
But for joy its blushes would come again
If my lady to kiss the rose should deign.