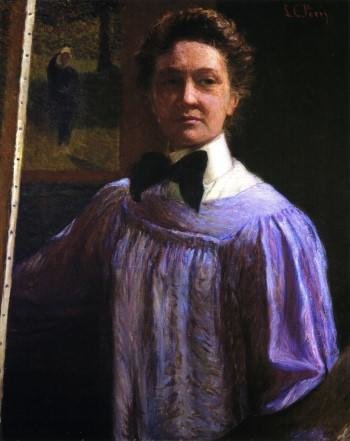 Lilla Cabot Perry is best-known as an American Impressionist painter, creating landscapes and portraits in a free form manner. Impressionism is characterized by loose brushwork and vivid colors. She was greatly influenced by Ralph Waldo Emerson‘s philosophies, and her friendships with Claude Monet and Camille Pissarro greatly influenced her work. Pissarro acted as a father figure to all four major Post-Impressionists: Vincent van Gogh, Georges Seurat, Paul Gaugin, and Paul Cezanne.

Lilla Cabot was thirteen years old when the Civil War began. Her parents took an active role in caring for sick and injured soldiers and protecting fugitive slaves. Lilla was seventeen when the Civil War ended, and she moved with her family to a farm in Canton, Massachusetts, where she first became interested in landscapes and nature. She studied painting while traveling through Europe with her parents in 1867.

Marriage and Family
In 1874 Lilla Cabot married Thomas Sargeant Perry, a professor of 18th-century English literature and moved to Boston. The couple had three daughters together: Margaret (1876), Edith (1880), and Alice (1884). At their home on Marlborough Street in Boston, the Perrys entertained prominent artists and writers, including Henry James. Perry completed her earliest known painting, Portrait of an Infant (Margaret Perry) in 1878; her children inspired much of her work. In 1884 portrait painter Alfred Quinton Collins provided Lilla Perry with her first formal art lessons at the age of thirty-six.

Perry’s father died in 1885, leaving her an inheritance that allowed her to study art more seriously. The owner of the Waltham Watch Company commissioned Perry to create a painting of his three daughters. With the money she earned from that job she traveled to Europe in June 1887. The Perrys moved to Paris that same year and lived there until 1889. There Lilla studied at two well-known art schools – the Academie Colarossi and the Academie Julian. Lilla also copied paintings of the old masters in Italy, England, and Spain. She also worked with painters of the Realist, German Social Realist, and Symbolist movements, which greatly affected her style of painting.

With encouragement from artist Walter Gay, Perry submitted two of her recent paintings to the Societe des Artistes Independants. The portraits of her husband Thomas Sergeant Perry (1889) and her daughter Edith Perry (1889) were accepted by the Paris Salon, launching Lilla Perry’s career in France. While in Paris, she became friends with Neo-Impressionist painter Camille Pissarro and American artist Mary Cassatt.

Discovering Monet
In 1889, at the age of 41, Perry saw her first Impressionist painting in a Paris gallery, and her life was changed forever. She found the artist who created the painting and introduced herself to him; his name was Claude Monet. One of the founders of the French Impressionist style, Monet was the most consistent practitioner of the movement’s philosophy of expressing one’s perceptions, especially as applied to plein-air (outside) landscape painting. Perry and Monet became close friends.

The Perrys spent nine of the summers between 1889 and 1909 at a rented house at Giverny in northern France, close to Monet’s home. He did not teach his techniques to others, but he often gave Perry advice about her work. Other Impressionists of the time are August Renoir, Berthe Morisot, and Edgar Degas.

Impressionism emerged as an artistic style in France in the 1860s; it is considered the first modern movement in painting. Its influence spread throughout Europe and the United States. Its originators attempted to reproduce the impression of a scene, which lasted for only an instant. To capture this magical moment, many Impressionist artists began painting en plein air, or outdoors in the streets and countryside. Painting out amongst nature was difficult before 1841, when American painter John Rand invented the paint tube. Until then, artists had to mix their paints, using powders and oils. It was quite messy, and there was no good way to transport the paint after it was mixed. 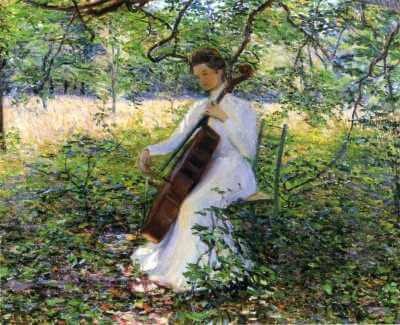 Image: The Violoncellist
Impressionist painting
The violoncello evolved to become the instrument we now know as the cello.

At Giverny, Perry observed Claude Monet; the way he handled color and light inspired Perry, and her work visibly changed. She adopted her own style of Impressionism, her way of capturing light and color. She no longer blended brushstrokes; the purpose of each thick, short stroke was to capture the essence of the subject, rather than to delve into its details. She juxtaposed colors on the canvas, instead of mixing them on the palette, and she worked with softer colors, but occasionally something very bright, like poppy red.

When you go out to paint, try to forget what objects you have before you, a tree, a house, a field or whatever. Merely think here is a little square of blue, here an oblong of pink, here a streak of yellow, and paint it just as it looks to you, the exact color and shape, until it gives your own naive impression of the scene before you.

Back in the USA
Perry returned to Boston with her family in 1891, and her artistic career took on new meaning. She was inspired by the new style of painting she had discovered, and she spread the word about Impressionism to others with great gusto. Working in Boston and on a New Hampshire farm during the summers, she painted portraits and landscapes in the Impressionist style to help support the family. Exhibiting her work in Paris and the United States, she won medals at exhibitions in St. Louis and San Francisco. At the 1892 exhibition of the Massachusetts Charitable Mechanic Association, she was awarded a silver medal. The following year she was chosen to represent her state at the World’s Columbian Exposition in Chicago, Illinois.

In 1894 Perry’s Impressionist paintings were exhibited in Boston at the prestigious gentlemen’s venue, St. Botolph Club, where she realized that her work and Impressionism were being accepted as an art form in the United States. Her work achieved international fame during the years 1894 through 1897. She exhibited her work in Boston, as well as the Societe Nationale des Beaux-Arts in Paris to great acclaim. In 1897 St. Botolph Club held a solo exhibition for Perry, which featured a full range of Perry’s artwork, including Impressionist portraits and landscapes. A Boston Evening Transcript critic said of her work:

Mrs. Perry is one of the most genuine, no-nonsense, natural painters that we know of… Such paintings must be taken seriously. 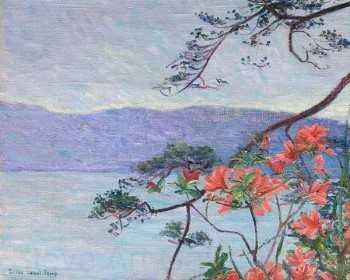 Prolific in Japan
Thomas Perry worked as an English professor at Tokyo’s Keiogijiku University, and the family resided there for three years, 1898 through 1901. Lilla produced approximately paintings while living there, and took full advantage of Tokyo’s artistic community. Her experience with Asian art made it possible for her to develop a unique style that brought together western and eastern influences. The result of this combination of east and west is striking. Impressionist portraits flow seamlessly with the well-organized compositions of Eastern art at that time. Art historian William Gerdts wrote:

Lilla Cabot Perry was one of the most significant of the American painters who went to Japan in the late 19th century; … of all the Americans to work there, … Perry’s work is the least traditional and is the most indebted to the Impressionist aesthetic, and some of her Japanese scenes are, in color and brushwork, extremely close to Monet.

By 1901 the Perrys had returned to Boston. In 1903 they bought a farmhouse in Hancock, New Hampshire as a summer home. In 1904, her Portrait of Mrs. Joseph Clark Grew (her daughter Alice) made a great debut at the prestigious International Louisiana Purchase Exhibition in St. Louis by winning a bronze medal.

Perry’s life for the next few years was extremely difficult. She returned to France in 1905, but the following winter her health failed. Frequent moves and unprofitable investments had used up most of the inheritance Perry had received from her father. Therefore, she constantly needed commissions to paint portraits to support the family, which also adversely affected her health.

Coming Home
In 1908 Perry moved to Boston permanently and focused on portraits. Her health improved, and the Salon des Independents in Paris exhibited six of her paintings that same year. With a new enthusiasm for her art, she created an urban view – the State House in Boston (1910). The Panama-Pacific International Exposition in San Francisco, California awarded Perry a bronze medal for her portrait, Hildegarde, the daughter of a friend.

Throughout her career as an artist, Perry was active in the local artistic communities and promoted the Impressionist style wherever she lived. She helped found the Guild of Boston Artists, which opened its galleries in 1914 to promote accomplished painters and sculptors. She was a board member and first Secretary of the Guild and worked hard to attract financial backers. In 1920 the Guild paid tribute to Perry for giving six years of loyal service.

In 1922, Lilla Cabot Perry had her first solo exhibition in New York, which included her landscapes from Japan and Giverny. A New York Morning Telegrapher review called it “one of the most exciting exhibitions given by a woman in this city in years.”

Late Years
Perry published a book of poetry, The Jar of Dreams, in 1923. The same year Lilla fell severely ill with diphtheria; around that same time her daughter Edith was sent to a private mental health facility in Wellesley after suffering a nervous breakdown. Perry spent the next two years recovering from her illness in Charleston, South Carolina. During that time she found new inspiration, painting such works as Road from Charleston to Savannah and A Field, Late Afternoon, Charleston, South Carolina.

Thomas Sergeant Perry died of pneumonia on May 7, 1928.

Perry spent a considerable amount of time mourning her husband’s death, but she allowed her work to be exhibited at the Guild of Boston Artists in 1929 and again in 1931. Many of her landscapes were featured at that show, including Autumn Leaves (1926), Snow, Ice, Mist (1929), and Lakeside Reflections (1929–1931). Perry painted winter scenes at her Hancock, New Hampshire farm. Mist on the Mountain (1931) was her last exhibited landscape. 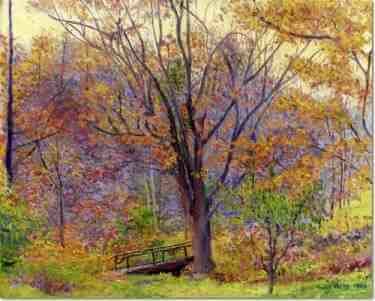 Image: The Foot Bridge (1929)
Painted by Lilla Cabot Perry, at the age of eighty-one

Perry’s active promotion of Impressionism led the way for other American artists like Mary Cassatt to gain exposure and acceptance in the United States. She lectured on the talents of her friends Claude Monet and John Breck and showcased their work, furthering their careers in America. Danish-French Impressionist Camille Pissarro was in dire financial straits until Perry sold several of his works to her friends and family.

Lilla Cabot Perry was still painting on the day she died, February 28, 1933, at the age of eighty-six. Her ashes and those of her husband are buried at the Pine Ridge Cemetery in Hancock, New Hampshire.