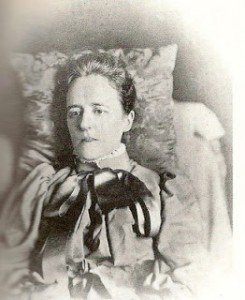 Born into a wealthy and intellectually active family – sister of novelist Henry James and psychologist and philosopher William James – Alice James soon developed the psychological and physical problems that would end her life at age 43. Alice never married and lived with her parents until their deaths. She is known mainly for the diary she kept in her final years.

Alice James was born August 7, 1848 in New York, the only daughter of Henry James, Sr. and Mary Robertson Walsh James. Henry James, Sr. had high hopes for his four sons, but his only expectation for Alice was that she stay at home and be a companion to her parents until she married. In 1853, Henry James Sr. wrote in an article on the Woman’s Movement: “The very virtue of woman… disqualifies her for all didactic dignity. Learning and wisdom do not become her.” Although her four brothers were broadly educated in the U.S. and Europe, Alice’s education was haphazard.

In America Alice attended several private schools for girls, but there was little academic study. While the family lived in Europe, she attended no school at all, but learned French and math from a series of governesses, but nothing consistent and nothing that would prepare Alice for an independent life away from her family.

Alice James suffered several nervous breakdowns in her lifetime, her first at age 12. These attacks have been connected to her enforced inactivity and lack of intellectual stimulation. Alice certainly recognized this, understanding her own collapses as the failure to control feelings of rage that were leveled primarily at the father who kept his daughter tied to him and removed from outside activities.

Alice did circulate to a small degree in the life of New England. As a young girl, she sewed bandages for the Newport Women’s Aid Society during the first two years of the Civil War. Alice’s brother Garth Wilkinson “Wilky” James enlisted in the Union Army at the age of 17, eventually transferring to Colonel Robert Gould Shaw‘s 54th Massachusetts Regiment of African American soldiers. He participated heroically in the futile charge on Fort Wagner, South Carolina, and sustained serious injuries to his legs and feet which would plague him for the rest of his life.

In 1868, Alice joined the Female Humane Society of Cambridge with her mother. From 1873 to 1876 she taught history for the Society to Encourage Studies at Home, a national correspondence course for women based in Boston. But in her own correspondence, she tended to discount the importance of this work.

Each time Alice returned to her parents’ home, she reentered a suffocating world from which there was no escape. It did not help that the other young women in her social circle were marrying while she had no prospects for marriage. Frustrated, brilliant and opinionated, Alice turned inward and her health deteriorated.

While teaching, she met a fellow instructor, Katharine Loring; by 1879 the two were Inseparable. Katharine Loring was everything to Alice James, according to one of her biographers – “man and woman, father and mother, nurse and protector, intellectual partner and friend.”

For years, Alice had rejected (at least privately) her family’s understanding – or misunderstanding – of her. Her breakdowns had only exacerbated this misunderstanding, giving her parents and brothers, especially psychologist William, license to study her as a “collection of symptoms” rather than to view her as a human being.

Alice never married and lived with her parents until their deaths only months apart in 1882. Alice was left alone, but with a comfortable inheritance. Henry James then assumed much of the responsibility for his sister, seeing to her finances and health care. By 1882, Alice had already suffered two major nervous breakdowns, and would experience several more before her death.

Alice sought various treatments for her disorders over the years but never found significant relief. She took the “rest cure” in Jamaica Plain, Massachusetts, in 1883, and received electrical “massage” in New York from another doctor and another clinic in 1884.

In late 1884, believing that a change of scene might improve her health, Alice moved to London to be near Katharine Loring and her brother Henry. Loring was a selfless, strong, intelligent, and compassionate woman who devoted much of her life to nursing Alice as well as her own sickly sister.

For the next eight years, Alice James suffered recurring bouts of what was eventually diagnosed as hysteria, a legitimate systemic nervous and physical collapse which may well have resulted from the suppression of her energies and talents in the name of femininity. (After World War I, “male hysteria” was also diagnosed, specifically in men returning from the horrors of battle.)

Keenly self-aware, Alice James started a diary in 1889, as a way of recording her understanding of herself. Seeking freedom through writing as her father and two of her brothers had done, Alice finally found her own words and her own voice in which to tell her own story.

I think that if I get into the habit of writing a bit about what happens, or rather doesn’t happen, I may lose a little of the sense of loneliness and desolation which abides with me. My circumstances allowing nothing but the ejaculation of one-syllabled reflections, a written monologue by that most interesting being, myself, may have its yet to be discovered consolations.

I shall, at least, have it all my own way, and it may bring relief as an outlet to that geyser of emotions, sensations, speculations and reflections which ferments perpetually within my poor old carcass for its sins; so here goes, – my first journal!

To him who waits, all things come!… Every since I have been ill, I have longed and longed for some palpable disease… but I was always driven back to stagger alone under the monstrous mass of subjective sensations which… I was personally responsible for… but a lump that I have had in one of my breasts for three months… is a tumour… nothing can be done for me but to alleviate pain…

If I can get on to my sofa and occupy myself for four hours, at intervals, thro’ the day, scribbling my notes and able to read the books that belong to me, in that they clarify the density and shape of the formless mass within, Life seems inconceivably rich…

After Alice was diagnosed with breast cancer and made it clear that she was prepared to die, Katharine moved in with Alice and became both companion and caretaker. Since Alice was often too ill to write, Katharine took dictation, writing down Alice’s thoughts, feelings, observations, and political commentaries in her diary.

This long slow dying is no doubt instructive, but it is disappointingly free from excitements: “naturalness” being carried to its supreme expression. One sloughs off the activities one by one… one revolves with equal content within the narrowing circle until the vanishing point is reached, I suppose…

I take satisfaction in feeling as much myself as ever, perhaps simply a more concentrated essence in this curtailment… I have been dead so long and it has been simply such a grim shoving of the hours behind me as I faced a ceaseless possible horror… that now it’s only the shrivelling of an empty pea pod that has to be completed.

Alice James died of breast cancer in London on March 6, 1892. Katherine Loring took charge of the funeral arrangements, had Alice cremated and eventually returned the ashes to the James crypt outside of Boston.

Alice James had entrusted her diary to Katherine Loring shortly before her death. Loring sent copies to her brother Henry and other family members. Henry James feared that the diary’s gossip – with recognizable names included – would endanger his own social standing and access if it were published.

In 1934 a poorly edited version of Alice’s diary was published as Alice James: Her Brothers – Her Journal, as a kind of tribute to Garth Wilkinson and Robertson James, the “lesser” of the James brothers, by Robertson’s daughter, Mary James Vaux. Henry James wrote to his niece that “in our family group girls scarcely seem to have had a chance.” Alice James’ life bears witness to his statement.

In 1964 that Leon Edel, Henry James’ biographer, published The Diary Of Alice James, a restored version based on Katherine Loring’s transcription of the original. The diary has made Alice James something of a feminist icon, in recognition of her struggle for self-expression within the repressive Victorian idea of womanhood.

Jean Strouse published Alice James: a Biography in 1980, noting that Alice – without a real purpose in life – turned her energies inward,

registering social change and personal conflict in the dramatic wars that raged through her body and mind…. The intelligence and energy Alice might have used in some productive way went into the intricate work of being sick… miserable health was her career.

Susan Sontag wrote a play about Alice named Alice in Bed (1993), which seems to waver between sympathy and impatience with its subject. A new production of the play opened in New York in a new production in the autumn of 2000.

Other members of the famous James family, including patriarch Henry Sr., suffered from various emotional disorders, such as major depression, anxiety, panic attacks and nervousness in general, during their lives. I have always believed that with some individuals superior intelligence is more a curse than a blessing.