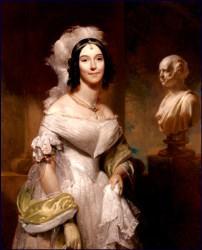 Dolley Madison introduced Angelica Singleton to President Martin Van Buren’s son and then guided her through the intricacies of Washington entertaining and politics when she became the official White House hostess during Van Buren’s term.

Image: Angelica Van Buren’s portrait was painted by Henry Inman, while White House hostess for her father-in-law, whose bust is seen in the background. Today it hangs in the White House above the fireplace mantle in what has become known as the Red Room.

Early Years
She was born Sarah Angelica Singleton on February 13, 1818 at Wedgefield, South Carolina, the daughter of prosperous cotton planters Richard and Rebecca Travis Coles Singleton. Angelica was raised at the family plantation Home Place in Sumter County, South Carolina. The Singletons believed strongly in the need to provide their daughters with an excellent education, beyond the traditional domestic arts.

Angelica attended the Columbia Female Academy in Columbia, South Carolina (1826-1830), the leading educational institution for women closest to their home, then the elite boarding school, Madame Grelaud’s Seminary for Young Ladies in Philadelphia, Pennsylvania (1831-1836), where she learned grammar, languages, deportment, history and music.

The exorbitant tuition at Madame Grelaud’s Seminary limited enrollment to only the nation’s wealthiest families. Among them were several great-granddaughters of Martha Washington, Presidential daughter Maria Monroe, and the future First Lady of the Confederacy, Varina Davis.

Angelica Singleton spent the 1836-1837 social season (which ran from late November through spring) in Richmond, living with her mother’s sister Sarah Sally Coles Stevenson, at which time she underwent her formal social debut in that city. While there, Angelica was first introduced to the role women were increasingly beginning to play in organizing and managing public charities.

Washington, DC
Angelica spent the 1837-1838 social season in in Washington, DC with her mother’s cousins, U.S. Senator William Campbell Preston and former First Lady Dolley Madison, then living across Lafayette Square from the White House. The high point was an invitation to accompany Mrs. Madison to a private White House dinner in March 1838 with President Van Buren and his four bachelor sons.

Young Angelica was described as “a lovely, charming belle with Roman goddess features, dark, expressive eyes, fashionable corkscrew curls and a long neck.” Her aristocratic manners, excellent education and beauty won the admiration of the president and the heart of the eldest of his sons, Abraham Van Buren, who worked in the White House as personal secretary to his father.

During the decade prior to his presidency, Martin Van Buren had earned a reputation among Washington socialites as a gentleman who enjoyed entertaining. In his first year in office, however, Van Buren was so consumed with work, especially the economic panic of 1837, that he had not hosted his first major social event until January 1838, nine months after assuming the presidency.

Panic of 1837
President Van Buren had served as secretary of state, vice president and close adviser to Andrew Jackson. During Jackson’s two terms as President of the United States (1829-1837), Jackson had become convinced that the Bank of the United States was hurting U.S. citizens by exercising too much control over credit and economic opportunity. He succeeded in shutting it down and moved federal funds to smaller state banks.

When Martin Van Buren became the eighth U.S. president in 1837, he announced his intention “to follow in the footsteps of his illustrious predecessor,” and retained all but one of Jackson’s cabinet. By then the reckless credit policies of the various state banks had led to massive speculation in Western lands. The banks were clearly in trouble and Van Buren had few economic tools to deal with the financal meltdown.

Banks began to close, businesses began to fail, and thousands of people lost their land. This became known as the Panic of 1837, and it was followed by five years of the worst economic depression the young nation had yet known. Even with the country in economic crisis, Van Buren adhered to the political philosophy of Thomas Jefferson and Andrew Jackson: the federal government should exercise only limited power.

The president refused to listen to those who believed that the federal government should try to stabilize the nation’s failing economy by creating a new Bank of the United States. His solution was to move federal funds from state banks to an independent treasury; this did not stop the economic turmoil. He was scapegoated for the depression and called “Martin Van Ruin” by his political opponents.

Understandably, Van Buren had little time to host social events, and for the first year and eight months, there was no First Lady in the White House. His wife of twelve years, Hannah Van Buren [link], had died 17 years earlier and he remained single for the remainder of his life. He could have asked one of his female relatives or the spouse of one of his Cabinet members, but he had not done so.

Marriage and Family
The romance between Angelica Singleton and Abraham Van Buren blossomed quickly and they were married in South Carolina on November 27, 1838. The President reportedly approved of the marriage and the ties it brought with the Southern aristocracy. Van Buren was often in the crosshairs of the Northern Democrats with abolitionist sentiments and the Southern Democrats who wanted to ensure that slavery continued to support their agrarian economic system.

Days after the wedding, Angelica traveled to Washington with her husband, and moved into his suite at the White House. Settling into the presidential household just as the 1838-1839 social season began, the President’s new daughter-in-law was escorted by him into formal dinners and seated with the place of honor as the woman of highest-ranking.

First Lady of the United States
On January 1, 1839, Angelica Van Buren assumed the duties of hostess at the age of 21, the youngest woman ever to hold the title of First Lady. She made her debut by receiving the general public at the annual New Year’s Day Reception in the oval state room (not yet called the Blue Room). A Boston Post reporter who observed her behavior at the event noted that she was “universally admired” by the public crowds who met her. Her teas and balls quickly became popular with the ladies of Washington.

At the end of the social season in spring 1839, the newlyweds took an extended trip through England (where her uncle Andrew Stevenson was U.S. minister) and other European countries. While abroad, Angelica achieved celebrity status. She was presented to the royal courts of England and France meeting the newly coronated Queen Victoria as well as France’s king, Louis Philippe.

When they returned, Angelica resumed the duties of First Lady for the rest of her father-in-law’s presidency, employing many etiquette techniques she had witnessed in her European travels. While many in Washington high society admired her regal style, Angelica was criticized by the president’s enemies as being extravagant, at a time when the majority of the United States was still suffering economically.

When it became necessary to redecorate and replace some of the furniture that had been battered during the eight years of the Jackson administration, she was careful not to overspend. She also gave mostly small dinner parties, dispensing with all large functions other than the New Year’s Day reception.

In 1839, Angelica became pregnant, and give birth in March of the following year to a daughter, Rebecca. Details are varied; some reports claim that Rebecca died within hours, others state that both mother and infant were ill for several months after the birth, and that Rebecca died in the fall of 1840.

Gold Spoon Oration
While winning praise during her initial period as First Lady, Angelica’s plan to re-landscape the White House lawns, however, backfired badly. Pennsylvania Whig Congressman Charles Ogle referred to the proposed plans in his famous Gold Spoon Oration on the floor of Congress in April 1840, reviling President Van Buren, the self-made son of a Hudson Valley tavernkeeper, as living in opulent style during an economic depression.

Ogle’s Gold Spoon Oration was a three-day political speech, spurred on by his objections to a $3,665 appropriation for White House landscaping and furniture repair. Shortly after delivering the speech, Ogle had tens of thousands of copies printed and circulated around the nation as campaign literature, reviling Van Buren, while idealizing Whig presidential candidate William Henry Harrison as a homespun man of the people.

It was claimed by the Trenton Emporium that what was published was not the speech made by Ogle. The paper claimed that the published speech was edited multiple times and stuffed with fabrications developed by other Whig Party members. It should come as no surprise that Van Buren was not reelected.

After the White House
When the Van Buren Administration ended on March 4, 1841, Angelica and Abraham spent several months with her family in Sumter, South Carolina. There, on June 22, 1841 she gave birth to the first of three sons who lived to adulthood, Singleton. That fall the family moved into Lindenwald, the country estate of the former President in the Hudson River Valley village of Kinderhook, New York.

The Van Burens continued to winter at Home Place in South Carolina, which Angelica later inherited. A West Point graduate and career military man, Abraham served in the Mexican War. In her later years, though they spent much time in South Carolina and Europe, Angelica and her husband made their permanent residence in New York City after 1848, where Angelica was known for her charitable work.

During the Civil War Angelica consoled herself by the separation from her Singleton family and southern roots by sending blankets to Confederate soldiers in Northern prisons a Union Army prison located in Elmira, New York. Yet this was also in line with her charitable efforts on behalf of prisoners in general.

After retiring from his military career, Abraham Van Buren worked on the editing and publication of the letters and documents from his father’s administration of his father. Martin Van Buren died in 1862, and Abraham passed away on March 15, 1873. By this time, her parents, many of her nephews and all five of her siblings had died.

Angelica Van Buren died December 29, 1878 at the age of 61, and was buried beside her husband at Woodlawn Cemetery in the Bronx, New York.