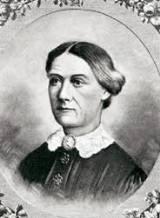 Margaret Taylor was the wife of Zachary Taylor and the 13th official First Lady of the United States from March 4, 1849 through July 9, 1850. Although she supervised the running of the White House, she left the hostessing duties to her daughter Betty. The sudden and unexpected death of her husband abruptly ended her time as first lady.

Childhood and Early Years
Margaret ‘Peggy’ Smith was born in Calvert County, Maryland on September 21, 1788, the daughter of Walter Smith and Ann Mackall Smith. Her father was a prosperous Maryland tobacco planter and veteran officer of the Revolutionary War, and Peggy was raised in a large brick plantation house.

Not much is known of Peggy’s early life, but it can be assumed, based on the status of her family and the era in which she lived, that she received a good education. She was known to be a childhood acquaintance of Nelly Custis, the granddaughter of Martha Washington, who was raised in Virginia at Mount Vernon, suggesting that Peggy socialized with other prominent Virginia and Maryland families.

Peggy was only ten years old when her mother died, and her own sisters were said to be considerably older. She was therefore often at the nearby estate of her maternal grandparents, ‘God’s Graces.’ When her father died in 1804, sixteen-year-old Peggy moved to Louisville, Kentucky to live with her sister Mary Anne Chew.

Marriage and Family
In 1809, Peggy was introduced to Lieutenant Zachary Taylor, then home on leave. They were married on June 21, 1810, and for a while the young wife stayed on the farm given to them as a wedding present by Zachary’s father. She bore her first baby there. Their marriage appears to have been a happy one.

Peggy made it known that she intended to always be with her husband, regardless of the deprivation, as long as she was in good health, and sje cheerfully followed him from one remote garrison to another along the western frontier of civilization. An admiring civilian official cited her as one of the “delicate females… reared in tenderness” who had to educate “worthy and most interesting” children at a fort in Indian country.

In 1820, while stationed at Bayou Sara, Louisiana, she lost two of her five daughters – three-year old Octavia and one-year old Margaret – to what Taylor called “a violent bilious fever.” Peggy also fell deathly ill. She survived but from that point on her health was referred to as ‘delicate.’

Military Wife
Peggy insisted on having her children sent out of the frontier once they were older, to be raised with relatives in the more civilized town of Louisville, Kentucky, and to receive the finest educations available. Ann went to a women’s academy in Lexington, Kentucky, Sarah to Louisville and Cincinnati, Betty to Philadelphia and Dick to Yale in New Haven, Connecticut.

She did not want to expose them to the hardships in the frontier forts and camps where she continued to live with her husband. Settled for four years at Fort Crawford (1832-1836) in Wisconsin, Peggy lived with her husband and children in a two-story wood frame house. By the end of the tour of duty there, however, all of the children were living elsewhere.

In the basement of the home, Peggy made dairy products for her family and other residents of the fort, and also had an impressive wine cellar of fine vintage, served to various officials and guests who came to meet with Taylor there. On the property, she raised chickens, and planted a flourishing vegetable garden.

Knowing the hardships of a military wife, the Taylors opposed their daughters’ marrying career soldiers – but each eventually married into the Army. On June 17, 1835, second daughter Sarah Knox Taylor married Lt. Jefferson Davis, who was in Zachary Taylor’s command. The young couple moved to the groom’s property in Mississippi, where Knoxie died of malaria three months after her wedding.

Peggy Taylor was broken in spirit by the loss. A strange coincidence of her death was that it took place near Bayou Sara, Louisiana – where Peggy’s two young daughters had died fifteen years earlier. Zachary Taylor did not reconcile with Jefferson Davis until they fought together in Mexico more than a decade later.

In 1837, Taylor requested leave so he and Peggy could visit Ann in Kentucky and Betty in Philadelphia. However, with the Seminole Wars raging in Florida, he was ordered to Fort Brooke in Tampa. Peggy made her way, via New Orleans, to Tampa, where she served as a nurse in the army hospital, tending to the sick and wounded. Even when her husband left to lead other maneuvers, Peggy stayed and kept him apprised of what was happening at the fort.

Finally in 1838, Peggy was able to have a break from army life when her husband was promoted and given leave. They sailed to Pensacola, Florida, then to New Orleans, proceeding to Baton Rouge and then Louisville, to spend time with their relatives there. They then proceeded to Washington, DC, where it was highly likely that they made their first visit to the White House to meet President Martin Van Buren, before continuing their trip.

This period began what was to be a relatively brief time of peace for Peggy, especially with the company of her daughter Betty. Two years later, Taylor was posted to Baton Rouge. There she decided to turn down the commodious quarters that were provided for her as the wife of the post commander.

She decided instead to restore a dilapidated four-room square cottage with a wide veranda surrounding it. A relatively old building remaining from the Spanish commandant there, it sat overlooking the Mississippi River and was shaded by mossy trees. It became the first permanent home she shared with her husband.

Although she would make two brief forays, Peggy now preferred living at her Baton Rouge cottage, even if that meant being separated from her husband. She also planted a thriving and healthy vegetable garden, began a dairy to provide fresh butter and milk, and taught other military wives to do likewise.

In 1845, Taylor was called to command the Army and secure U.S. positioning near the Rio Grande in what would become known as the Mexican War. For the first time in their marriage Peggy decided not to join him at the front. Despite visits from her daughter Ann, now married to a U.S. Army surgeon, and her four grandchildren, Peggy lived in terror that her husband would be killed in the war.

According to legend she prayed to God for his safe return and vowed that she would never go into society again, in Louisville or anywhere else. The story is highly likely, for during this period of her life, Peggy Taylor became deeply religious. However, she was at her husband’s side when the city of New Orleans celebrated him with parades and tributes as the great hero of the Mexican War.

Several anecdotes, including two told by her husband, indicate that Peggy vigorously protested his nomination as the Whig candidate for president in 1848. He enjoyed telling people that she was praying that his opponent would win the presidency. She had already been besieged by people who stopped at her Baton Rouge cottage, hoping to get a glimpse of the famous general.

First Lady of the United States 1849-1850
By the time Peggy Taylor became First Lady, she was 60 years old, and the hardships of following her husband from fort to fort had taken its toll. Contradictory to what some chroniclers have asserted, she did attend her husband’s inauguration ceremony, surrounded by her tightly-knit family circle.

However, she turned down an invitation from the outgoing presidential couple, James and Sarah Polk, to join her family and Whig supporters at a White House dinner the night before the ceremony. She also did not appear at the two Inaugural Balls, remaining instead in her Willard Hotel suite with her grandchildren as she had done the previous evening.

Peggy’s family were the primary focus of her tenure as the president’s wife living in the White House. Most of all, she took charge of the well-being of Zachary Taylor as she always had, looking after his diet, health and apparently an increasingly appropriate wardrobe, he having earned a reputation as something of a sloppy dresser.

Though Peggy welcomed friends and relatives in her upstairs sitting room, presided at the family table, met special groups at her husband’s side, and worshiped regularly at St. John’s Episcopal Church, she took no part in formal social functions, perhaps because of her promise to God during the Mexican War.

She focused her attention on the maintenance of the executive household – ordering food for family meals and most likely public entertaining as well, overseeing the slaves and servants duties, supervising the gardens, the dairy and the kitchen.

To what degree, if any, Peggy Taylor influenced the President on matters is unknown. She was well-versed enough in her husband’s policies to always take “every opportunity to drop a good word in company that might help her husband,” and it was clear that President Taylor highly respected her.

Varina Davis – second wife of future Confederate president Jefferson Davis – became a good friend to Peggy, often calling on her at the White House. At an 1849 White House dinner, Varina Davis recorded that Zachary Taylor told her husband, “You know my wife was as much of a soldier as I was.”

The one element of her role as First Lady that Peggy Taylor refused to engage in was the duties of official hostess. That was a task she gladly passed to her daughter Betty, then 25. ‘Miss Betty’ presided over all public functions in the White House as the official hostess of the Taylor Administration. One observer noted that her manner blended “the artlessness of a rustic belle and the grace of a duchess.”

Peggy Taylor did attend numerous public events in the state rooms, but she was nevertheless rarely recognized or acknowledged by the general public. Standing among a larger group of women relatives who clustered near the President, the presence of the First Lady could often go unnoticed.

On July 4, 1850, Zachary Taylor consumed copious amounts of cold milk and cherries after attending holiday celebrations and a fund-raising event at the Washington Monument. Within a few days, he became severely ill with an unknown digestive ailment. The president died from acute gastroenteritis on July 9, 1850.

Peggy Taylor could not accept the reality of his death. She became hysterical and repeatedly stated that he had survived worse threats to his life on the battlefield and in the primitive forts where they had lived. Upon his death she could not stand or walk without support and remained in her room while her husband’s funeral went on downstairs in the East Room.

Final Years
Peggy Taylor left the White House that evening with her daughter Ann Wood and her family, and lived with them for three months in Baltimore. She then traveled with her two daughters to New Orleans to meet her son Dick for the legal division of Taylor’s estate.

Because of the ample estate her husbnad left for her, she lived more comfortably as a widow than she had during her four decades on the frontier. She initially lived with her daughter Betty in Kentucky but found the constant expressions of sympathy for the late president that her presence always provoked to be too oppressive.

Peggy then lived in East Pascagoula, Mississippi with her son Dick, who had begun an extensive sugar plantation operation in St. Charles Parish, Louisiana in 1849. Her only known public appearance as a widow was at his wedding in 1851. All of the Taylor family correspondence was burned by Union troops during the Civil War.

Margaret Taylor died on August 14, 1852, at age 63, and was buried next to her husband near Louisville, Kentucky.