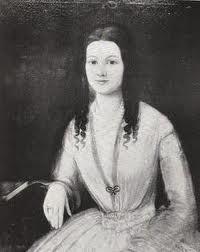 Sarah Knox Taylor was the daughter of Zachary Taylor, a career military officer and future U.S. president (1849-4850). She met future Confederate president Jefferson Davis while living with her family at Fort Crawford in Prairie du Chien, Wisconsin. They wed in 1835, but the marriage was short-lived.

Childhood
Sarah Knox Taylor was born on March 6, 1814 Margaret Smith Taylor and future president Zachary Taylor. Her middle name and her nickname Knoxie originated from Fort Knox II in Vincennes, Indiana, where she was born. She had three sisters and a brother, and grew up in various military installations, receiving most of her education from her mother.

Zachary Taylor was born in Virginia and raised on a respectable plantation outside Louisville, Kentucky. The Taylors had six children, but only four lived to maturity: three daughters and a son. The customary upbringing for military children was to keep them at home until they reached age seven or eight. Then they would be taken back east to be educated under the supervision of relatives. In their mid-teens, they were reunited with their parents.

Taylor rose through the ranks during his forty-year career in the U.S. Army, and spent his entire career moving from post to post; it was a harsh and itinerant lifestyle. Life on army posts could also be dangerous in the early 19th century. During Taylor’s posting in Louisiana, Sarah and her two sisters came down with what was called bilious fever, but is now considered malaria. Sarah survived, but her older and younger sisters died.

Courtship
While living at Prairie du Chien, Wisconsin, where her father commanded Fort Crawford and fought in the Black Hawk War (1832), seventeen-year-old Sarah Knox Taylor met Jefferson Davis, a young lieutenant and recent graduate of West Point, and fell in love. Taylor admired Davis for his skills as a soldier, but opposed the romantic relationship.

Davis sought his commander’s permission to marry Sarah, but Taylor refused. It is unclear whether Taylor had some personal objection to Davis as a son-in-law or because he simply did not want his daughter to become a soldier’s wife. The Taylors’ older daughter had married an army surgeon and was raising her three young children in a desolate frontier outpost.

Jefferson Davis Letter to Sarah Knox Taylor
Jefferson Davis was transferred to St. Louis in 1833, but he and Sarah conducted a long-distance relationship for two years through their letters. They also planned their wedding by mail, as is illustrated in this letter dated December 16, 1834, which Davis wrote from Fort Gibson, Arkansas after Sarah agreed to marry him.

T’is strange how superstitious intense feeling renders us, but stranger still what aids chance sometimes brings to support our superstition. Dreams, my dear Sarah, we will agree are our weakest thoughts, and yet by dreams have I been lately almost crazed, for they were of you and the sleeping imagination painted you not such as I left you, not such as I could like and see you, for you seemed a sacrifice to your parents’ desire…

[Your] kind, dear letter, I have kissed it often and it has driven many mad notions from my brain. Sarah whatever I may be hereafter I will ascribe to you. Neglected by you I should be worse than nothing and if the few good qualities I possess shall under your smiles yield a fruit it will be your’s as the grain is the husbandman’s.

It has been a sour productive of regret with me that our union must separate you from your earliest and best friends, a test to which the firmness of very few are equal, though giddy with passion or bouyant by the hope of reconciliation there be many who brave it, from you I am prepared to expect all that intellect and dignified pride brings, the question as it has occured to you is truly startling.

Your own answer is the most gratifying to me, is that which I should expected from you, for as you are the first with whom I ever ought to have one fortune so you would be the last from whom I would expect desertion. When I wrote to you I supposed you did not intend soon to return to Kentucky. I approve entirely of your preference to a meeting elsewhere than at Prarie-du-Chien and your desire to avoid any embarrassment [that] might widen the breach made already cannot be greater than my own, did I know when you would be at St Louis I could meet you there. At all events we meet in Kentucky.

Shall we not soon meet Sarah to part no more? oh! how I long to lay my head upon that breat which beats in unison with my own, to turn from the sickening sights of worldly duplicity and look in those eyes so eloquent of purity and love. Do you remember the “hearts ease” you gave me, it is bright as ever – how very gravely you ask leave to ask me a question. My dear girl I have no secrets from you, [you] have a right to ask me any question without an apology…

My lines like the beggar’s days are dwindling to the shortest span. Write to me immediately, My dear Sarah, My betrothed. No formality is proper between us.
Adieu Ma chere tres chere amie adieu au Recrire,
Jefferson

Further details of their courtship were lost to history in the summer of 1863 when Union troops carried off a packet of correspondence between Sarah and Davis. It is unclear whether they saw each other from the time Davis left Fort Crawford in 1833 until they met to be married in June 1835. Rumors of an elopement circulated for decades, but there was a formal ceremony.

Jefferson Davis resigned his army commission via a letter to the War Department dated April 20, 1835, perhaps in response to Taylor’s objection to his chosen career, though he had made no mention to Taylor of his intention to leave the army. His resignation became effective June 30, 1835.

Marriage
The wedding ceremony between Sarah Knox Taylor and Jefferson Davis took place on June 17, 1835 at Beechland, the home of Sarah’s aunt Elizabeth, near Louisville, Kentucky. Some sources state that the couple had Zachary Taylor’s blessing, but Sarah’s parents did not attend the wedding, and there is disagreement as to why they were absent.

The newlyweds immediately headed South on their honeymoon, taking a steamboat to Vicksburg, then on to Davis Bend, Mississippi, where they visited the bridegroom’s brother Joseph Davis. Joseph gave the couple 1,800 acres of land adjoining his property, where Jefferson planned to establish a plantation, which he named Brierfield.

Late that summer the couple traveled to Locust Grove in West Feliciana Parish, Louisiana – the home of Davis’ oldest sister Anna Smith. Sarah, mindful of the family tragedy that occurred the last time the Taylors traveled to Louisiana, wrote home, “Do not make yourself uneasy about me, the country is quite healthy.”

Either on the journey or soon after their arrival, however, both Davis and Sarah contracted malaria, and became severely ill.

Death
On September 15, 1835, two days short of their three-month anniversary, Sarah Taylor Davis died at age 21 while still at her sister-in-law’s home in St. Francisville, Louisiana. Sarah is buried along with other member’s of the Davis family in the cemetery located on the former site of the Locust Grove Plantation. The cemetery has been preserved by the state and is now known as the Locust Grove State Historic Site.

Though his family feared for his life as well, in the month following Sarah’s death, Jefferson Davis slowly improved, although he remained weak. Davis survived the illness, but was afflicted with recurrent malarial symptoms for the rest of his life.

Davis was devastated by the death of his young wife, as were her parents. Her death caused years of ill will between Davis and Zachary Taylor; he and his wife felt that Davis should have known better than to go to St. Francisville in the fever season. The men reconciled somewhat when they
met by chance on a Mississippi riverboat in 1845.

For eight years following Sarah’s death, Davis was reclusive and worshipped her memory. He spent time developing his cotton plantation, studied government and history, and slowly developed an interest in politics. In 1842, Davis attended the Democratic convention, and during the 1844 presidential election he campaigned for the Democratic candidate, James K. Polk.

Davis met Varina Howell when his brother Joseph invited her for the Christmas season at Hurricane plantation in 1844. The 35-year-old widower soon asked Howell to marry him. They were wed on February 26, 1845, and eventually had six children. While on their honeymoon, Davis insisted that they visit Sarah’s grave.

Davis served as a colonel under the command of General Zachary Taylor in the Battle of Buena Vista during the Mexican-American War in 1847. He became a Senator from Mississippi in 1848, Secretary of War under President Franklin Pierce in 1853, and finally President of the Confederate States of America in 1861.