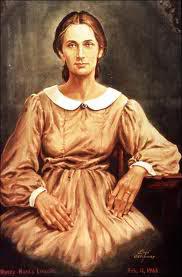 Judging from this painting of Nancy Hanks Lincoln by Lloyd Ostendorf, Lincoln did resemble his mother, who was described as being slender and about 5 foot 7 inches tall.

Nancy Hanks Lincoln (1784-1818) was the mother of Abraham Lincoln (the 16th President of the United States) through her marriage to Thomas Lincoln. After more than ten years of marriage, the family moved from Kentucky to Spencer County, Indiana. When Abraham was nine years old, Nancy Lincoln died of milk sickness at the Little Pigeon Creek settlement. Actor, producer, writer and director Tom Hanks is her third cousin four times removed.

Childhood and Early Years
Nancy Hanks was born on February 5, 1784 in Campbell County, Virginia, but details of her early life are scarce. By the time she was nine years old, she was an orphan, though it is not clear what happened to her parents. Following their deaths, she lived with the Richard Berry family in what would become Kentucky. Berry was apparently an uncle and a person of standing in the community, who took her in and raised as one of his own.

It was while living with the Berrys that Nancy came to know Thomas Lincoln, who lived nearby on a 238-acre Hardin County farm he had bought in 1802. Over the years, their friendship grew into something more, and on June 12, 1806, the two were married. The union would produce three children.

The Lincolns lived on three different Kentucky farms in the first ten years of their marriage – title and boundary disputes caused the loss of all three. Like other uneducated young men, Thomas Lincoln may have been vulnerable to scams and land fraud, though the land laws themselves were vague.

Daughter Sarah was born at the Hardin County farm on February 10, 1807. In the fall of 1808, the Lincolns settled on the 300-acre Sinking Spring Farm in Nolin Creek, Kentucky. On February 12, 1809, Abraham Lincoln was born in a one-room log cabin there. In 1811, they moved to Knob Creek Farm, where Thomas Jr. was born in 1812 but died in infancy.

Discouraged by the loss of three farms, Thomas Lincoln finally decided to move his family to Indiana, where land could be purchased under the provisions of the Land Ordinance of 1785 which ensured that land once purchased and paid for was retained. In the winter of 1816, they settled in present-day Spencer County in southern Indiana in what became known as the Little Pigeon community. That year Indiana became a state.

In December 1816, the Lincolns settled near Little Pigeon Creek where Thomas and Abraham set to work carving out a life in the Indiana wilderness. Father and son worked side by side to clear the land, plant the crops and built a sturdy home with logs from the plentiful hardwood forest. Nancy helped with clearing the land and tending the crops, as well as caring for her two young children. Thomas also found that his skills as a carpenter were in demand as the community grew.

Neighbors reported that Nancy Hanks Lincoln was “superior” to her husband, a strong personality who taught young Abraham his letters as well as the extraordinary sweetness and forbearance he was known for all his life. Quakers had the nearest of all English settlers to equality between the sexes, so this side of Nancy Hanks suggests that her background was Quaker. Quakers also showed affection for their children, unlike the austere Puritans.

The autumn frosts of 1818 had already colored the foliage of the huge trees of oak, hickory and walnut when neighbors of the Lincolns became desperately ill, stricken with the dreaded milk sickness. This disease is characterized by trembling, vomiting and severe intestinal pain that affects individuals who ingest milk or other dairy products, or meat from a cow that has eaten the white snakeroot plant.

Although highly rare today, milk sickness claimed thousands of lives among European-American migrants to the Midwest in the early 19th century in the United States, especially in frontier areas along the Ohio River Valley and its tributaries where white snakeroot was prevalent, because the new settlers were unfamiliar with the plant and its properties. The plant contains the potent toxin temetrol, which poisons the milk.

Several people in the community died that fall from the illness, including Nancy’s Aunt Elizabeth and Uncle Thomas Sparrow. While helping to care for her sick neighbors and relatives, Nancy Hanks Lincoln also consumed the contaminated milk, fell gravely ill, and died October 5, 1818 at age thirty-four.

Thomas and nine-year old Abraham fashioned planks and wooden pegs into a coffin. Nancy was then taken to her final resting place on a hilltop just south of the Lincoln farm. Eleven-year-old Sarah cared for Abraham until their father remarried the following year.

The gravesite of Nancy Hanks Lincoln now lies within the boundaries of Lincoln Boyhood National Memorial, a National Historic Landmark District managed by the National Park Service in present-day Lincoln City, Indiana. At least twenty unmarked and eight marked graves are at the site, including her aunt and uncle Elizabeth and Thomas Sparrow who also died from milk sickness.

“God bless my mother; all that I am or ever hope to be I owe to her.” These are Abraham Lincoln’s words. Lincoln believed that he inherited many traits from his mother: ambition, mental alertness and a power of analysis that were lacking in the rest of the family.

Undoubtedly she left her mark on the young boy in the countless small and intimate ways that mothers do with their children. The effects of both her life and her death did much to shape the character of the boy who grew up to be President.

In November 2008, the Mineral County Historical Society and the Historic Landmarks Commission officially recognized the researched site of the birthplace of Nancy Hanks in Mineral County, West Virginia, which was first identified in 1929. On February 12, 2009, on the bicentennial of the birth of Abraham Lincoln, the West Virginia House of Delegates passed a resolution recognizing Nancy Hanks Lincoln and her birth site.