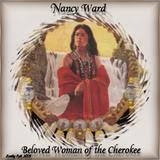 From the English rendition of Nanyehi, One Who Goes About, named for the mythological Spirit People, Nanyehi was a major Cherokee figure of the Southern frontier who became an almost legendary person due largely to her queenly manner and resolute personality. In her youth, Nanyehi had the nickname Tsistunagiska, Wild Rose, from the delicate texture of her skin which was likened to rose petals.

Nanyehi (nan yay hee) was born into a powerful family of the Wolf clan about 1738 at Chota, near Fort Loudon in eastern Tennessee. Her father was Fivekiller, a Cherokee-Delaware man, and her mother was Tame Deer, the sister of Chief Attakullakulla. Nanyehi’s childhood was one of constant terror, as warfare with European settlers and with other tribes meant that no day passed without the threat of violence.

There were many different conflicts going on. Indian tribes often went to war against each other, as they had throughout their history. Also, France and England fought each other for control of North America in the French and Indian War (1754–1763).

Nanyehi married Kingfisher, a Cherokee of the Deer clan, with whom she had two children, Fivekiller and Catherine. When the children were small, Nanyehi must have lived like many other Cherokee women—tending her own small garden, working in the community fields, preparing food for her family, and participating in village life.

Nanyehi’s life changed dramatically when she joined Kingfisher in a war party to fight the Creek Indians in Georgia. In a skirmish against the Creeks at the Battle of Taliwa in 1755, Nanyehi aided her husband by chewing on the lead bullets for his rifle to make them more pointed and deadly.

When the enemy killed her husband, she seized his musket and rallied the Cherokee warriors, leading a charge that brought victory to the Cherokee, and she was given the title Ghighau (Ghee gah oo), Beloved Woman. This powerful position gave her a lifetime voice in the tribal councils, because the Cherokee believed that the Great Spirit could speak through the Beloved Woman. She headed the Women’s Council, sat on the Council of Chiefs, and had complete power over prisoners.

During the late 1750s, South Carolina colonists built Fort Loudon on their western frontier, where the Cherokee and settlers traded and became friends. Several Cherokee women married Euro-American settlers, including Nanyehi. She married Bryant Ward, an English trader who had lived among the Cherokee for several years, and she bore a daughter with him. Nanyehi took the name Nancy Ward and learned English.

As Nanyehi came to understand more about the Anglo-American ways, she came to believe that the best way for the Cherokee to survive was to coexist with the new settlers. Bryant Ward had a European wife in South Carolina. After a few years, he returned to live with her and their children, but visits continued between Bryant and Nancy throughout their lives.

During the 1757 treaty negotiations related to the French & Indian War, Cherokee leader Attakullakulla, Nancy Ward’s maternal uncle, expressed his surprise that no white women were present. “Since the white man as well as the red is born of woman,” he said, “why does not the white man admit women to their councils?”

As more and more settlers encroached on Cherokee lands, various Cherokee warriors increased attacks against them. Most of the Cherokee were on the side of the British and wanted to kill the colonists invading their lands, but Nanyehi worked for peace.

Later, when the American colonists fought the English in the American Revolution (1775–1783), many Cherokee favored the British, but Nanyehi took the side of the colonists. In October 1776, Colonel William Christian led 1800 troops against the Cherokee, destroying most of their villages. Out of respect for Ward, he left her village alone.

In 1781, she warned the settlers of an impending attack by the Cherokee and asked for peace, this time by personally meeting with the leaders. Her warning didn’t end the bloodshed, but did keep her and her family from becoming prisoners when her whole village was captured.

In July of 1781, the settlers ordered the Cherokee to conduct a peace treaty and selected Ward to lead the negotiations. Ward said in part of her speech:

You know that women are always looked upon as nothing; but we are your mothers; you are our sons. Our cry is all for peace; let it continue. This peace must last forever. Let your women’s sons be ours; let our sons be yours. Let your women hear our words.”

After hearing her speech, the commissioners rewrote their demands, allowing the Cherokee to retain some of their lands. The two factions continued negotiations, but the murder of a Cherokee chief in 1788 ended the chances of fair peace negotiations. The Cherokee tried to assimilate into what was becoming mainstream society, yet they continued to lose more and more land to the colonists.

As more and more settlers came into eastern Tennessee, Nanyehi must have become disenchanted with her belief in friendship with Whites. In 1817, at age seventy-nine years, Ward was too weak to attend a Council meeting but sent a message to her people that said, “Your mothers and sisters ask and beg of you not to part with any more of our land. I have great many grandchildren which I wish them to do well on our land.”

But they rejected her counsel, and within a few years she and many other Cherokee people were forced to move away from their homes. The Cherokee had become much more patriarchal, and her words didn’t hold as much weight. By 1819, the lands she grew up on were sold, and she was forced to relocate.

As an elderly woman, Ward earned the nickname Granny Ward for taking in and caring for orphans. She also ran an inn for travelers during the remaining years of her life.

Nanyehi / Nancy Ward, the last Beloved Woman of the Cherokee, died in 1822.

In upper East Tennessee just after the turn of the 20th century James Abraham Walker, a part-time tombstone sculptor, was moved by the legend to produce a statue of gray granite. It is five feet high and represents Nancy Ward holding in her right arm a lamb, and in her left hand a plaque with the words Nancy Ward, Watauga, 1776, referring to the first occasion on which she warned the pioneers of an impending attack by the Cherokee, Dragging Canoe.

In this village there is an Indian woman of great authority and following whom they call… ‘great lady.’ Her house is very large and has many rooms. The rest of the nation brings presents and gifts to her. She has many Indian men and women in her service, and these are like priests and captains among them.