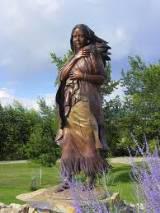 Native American on the Lewis and Clark Expedition

On February 28, 1803, President Thomas Jefferson won approval from Congress for a project that would become one of America’s greatest stories of adventure. It would be led by Jefferson’s secretary Meriwether Lewis and Lewis’ friend William Clark. Sacagawea, a Lemhi Shoshone Indian, was the only woman to accompany the 33 members of the permanent party to the Pacific Ocean and back.

As to the pronunciation and spelling of her name, Captain Clark wrote that the “great object was to make every letter sound” in recording Indian words in their journals. He therefore recorded her name as Sacagawea (Sah-cah’ gah-we-ah), a combination of the Hidatsa words for bird (sacaga) and woman (wea) – always with a ‘g’ in the third syllable.

Childhood
Sacagawea was born into the Lemhi Shoshone tribe around 1788 along the banks of the Lemhi River near Tendoy, Idaho. She and other female children of her band experienced mistreatment in her Shoshone village because of their gender. They experienced beatings, given only to girls, and did hard work not required of the male children. Boys in the tribe were never spanked because punishment could break the spirit of the young braves.

Although most of these practices were widely followed by other Shoshone Bands, Sacagawea’s people were in an unusually distressed state in the early 1800s. Enemy tribes had been chasing, robbing and decimating their group for many years. It had left them terribly poor and continually on the run, breaking down social values that would have provided unity and peace within the Band.

During the fall of 1800, while the Lemhi tribe were wintering near the three forks of the Missouri River, in what is now Montana, they were attacked by a band of Hidatsa (also known as Minnetaree) raiders. They killed most of the Shoshone Tribe and captured Sacagawea and several other girls to serve as slaves.

Sacagawea was taken from her Rocky Mountain homeland, in what is now Idaho, to the Hidatsa-Mandan villages near Bismarck, North Dakota. Sometime between then and 1804, she was gambled off to an irritable, abusive, middle-aged white French-Canadian fur trader named Troussaint Charbonneau, who claimed Sacagawea and another Shoshone woman as his wives.

Lewis and Clark Expedition
On February 28, 1803, President Thomas Jefferson won approval from Congress for a project that would become one of America’s greatest stories of adventure. Twenty-five hundred dollars were appropriated to fund a small expeditionary group, whose mission was to explore the uncharted West. Jefferson called the group the Corps of Discovery, and it was led by Captain Meriwether Lewis and his friend Captain William Clark.

The Corps of Discovery arrived at the Hidatsa villages in November 1804 to spend the winter, and built Fort Mandan. Captains Lewis and Clark interviewed several trappers who might be able to interpret or guide the expedition in the springtime. They hired Charbonneau when they discovered his wife Sacagawea spoke Shoshone.

The Shoshone possessed horses that the expedition would need to cross the western mountains. While Sacagawea did not speak English, she spoke Shoshone and Hidatsa. Her husband Charbonneau spoke Hidatsa and French. When the expedition met the Shoshone, Sacagawea would translate to Hidatsa for Charbonneau, who would translate to French. The Corps’ Francois Labiche spoke French and English, and would make the final translation for the two English-speaking captains.

As Clark explained in his journals, Charbonneau was hired “as an interpreter through his wife.” Charbonneau and Sacagawea, who was 16 years old and pregnant with her first child, moved into the expedition’s fort a week later. Sacagawea gave birth to a son Jean-Baptiste Charbonneau on February 11, 1805, and Lewis recorded the birth in his journal, noting that another of the party’s interpreters administered crushed rattlesnake rattles to speed the delivery. Clark and other European Americans nicknamed the boy Little Pomp or Pompy.

In April 1805, the Lewis and Clark Expedition left Fort Mandan and headed up the Missouri River in pirogues (small flat-bottomed boats), which had to be poled against the current and sometimes pulled from the riverbanks. Over the next four years, the Corps of Discovery would travel thousands of miles, experiencing lands, rivers and peoples that no Americans ever had before.

Sacagawea, with the infant Jean Baptiste, was the only woman to accompany the 33 members of the permanent party to the Pacific Ocean and back. Her activities as a member of the Corps included digging for roots, collecting edible plants and picking berries; all of these were used as food, and sometimes as medicine.

On April 7, 1805, the expedition resumed its westward trek along the Missouri River, west to the mountains. On May 14, an incident occurred which was typical of the calmness and self-possession Sacagawea was to display throughout the journey. The boat Sacagawea was in was hit by a sudden storm squall. It keeled over on its side and nearly capsized.

As the other members of the crew worked desperately to right the boat, Sacagawea, with her baby strapped to her back, retrieved the valuable books and instruments that floated out of the boat. They had been wrapped in waterproof packages for protection and, thanks to Sacagawea’s courage and quick actions, suffered no damage. Her calmness under duress earned the compliments of the captains.

In August 1805, Captain Lewis and three men scouted 75 miles ahead of the expedition’s main party, crossing the Continental Divide at today’s Lemhi Pass. The next day, they found a group of Shoshone. Not only did they prove to be Sacagawea’s band, but their leader Chief Cameahwait turned out to be her brother. After five years of separation, Sacagawea was reunited with her tribe, only to learn that all her family had died, with the exception of two brothers and the son of her oldest sister, whom she adopted.

Lewis recorded their reunion in his journal:

Shortly after Capt. Clark arrived with the Interpreter Charbono and the Indian woman, who proved to be a sister of the Chief Cameahwait. The meeting of those people was really affecting, particularly between Sah-cah-gar-we-ah and an Indian woman who had been taken prisoner at the same time with her, and who had afterwards escaped from the Minnetares and rejoined her nation.

The Shoshone agreed to barter horses to the Corps and provided guides who took them through the mountains and safely to the Nez Perce country, where they resumed river travel. The trip was so hard that they were reduced to eating tallow candles to survive. When they descended into the more temperate regions on the other side, Sacagawea helped to find and cook camas root to help them regain their strength.

Sacagawea turned out to be incredibly valuable to the Corps as it traveled westward, through the territories of many new tribes. As Clark noted on October 19, 1805, the Indians they encountered were inclined to believe that the whites were friendly when they saw Sacagawea. A war party never traveled with a woman – especially a woman with a baby. During council meetings between Indian chiefs and the Corps, Sacagawea was used and valued as an interpreter.

As the expedition approached the place where the Columbia River emptied into the Pacific Ocean, Sacagawea gave up her beaded belt to enable the captains to trade for a fur robe they wanted to give to President Thomas Jefferson. On November 24 all members of the expedition – including Sacagawea – voted on the location for building their winter fort. Near present-day Astoria, Oregon they constructed and inhabited Fort Clatsop during the winter of 1805-1806.

In January, local Indians told the expedition of a whale washed up on the beach some miles to the south. Clark assembled a group of men to find the whale and possibly obtain some whale oil and blubber, which could be used to feed the Corps. Sacagawea had yet to see the ocean, and insisted on her right to go see this “monstrous fish.” By the time they arrived there was nothing left but the skeleton, but they were able to buy about 35 pounds of blubber.

On the return trip, they approached the Rocky Mountains in July 1806. As they passed through her homeland, Sacagawea proved a valuable guide. She remembered Shoshone trails from her childhood, and Clark praised her as his “pilot.” On July 13, Sacagawea advised Clark to cross into the Yellowstone River basin at what is now known as Bozeman Pass, Montana.

The Corps returned to the Hidatsa-Mandan villages on August 14, 1806, marking the end of the trip for Sacagawea, Charbonneau and Jean Baptiste. When the trip was over, Charbonneau was given $500.33 and 320 acres of land. Sacagawea, her husband and son remained at Fort Mandan.

As he traveled downriver at the end of the journey, Captain Clark wrote to Charbonneau and invited him to bring his family to St. Louis:

You have been a long time with me and conducted your Self in Such a manner as to gain my friendship, your woman who accompanied you that long dangerous and fatiguing route to the Pacific Ocian and back deserved a greater reward for her attention and services on that route than we had in our power to give her at the Mandans. As to your little Son (my boy Pomp) you well know my fondness of him and my anxiety to take him and raise him as my own child…

Later Years
Charbonneau and Sacagawea spent three years among the Hidatsa before accepting William Clark’s invitation to come to St. Louis in 1809. At Clark’s insistence they entrusted Jean-Baptiste’s education to Clark, who enrolled the young man in boarding school.

In March 1811, Charbonneau sold his land back to Clark and returned to the Dakotas with Sacagawea. Their son remained in St. Louis in the care of Captain Clark, who was the Indian Agent of the Louisiana Purchase at that time. In 1812 Sacagawea gave birth to a daughter, Lisette. Medical researchers believe that Sacagawea suffered from a serious illness most of her adult life, which may have been aggravated by Lisette’s birth.

On December 22, 1812, Sacagawea died at age 25. At the time of her death, she was with her husband at Fort Manuel, a Missouri Fur Company trading post in present-day South Dakota.

Eight months after her death, Clark legally adopted Sacagawea’s children, Jean Baptiste and Lisette. Baptiste was educated by Clark in St. Lous, and at age 18 was sent to Europe with a German prince. It is not known whether Lisette survived past infancy. Jean-Baptiste carried lifelong celebrity status as the infant who went with the Lewis and Clark Expedition to the Pacific Ocean and back.

Sacagawea has become an important part of the Lewis and Clark legend in the American public imagination. In the early twentieth century the National American Woman Suffrage Association adopted her as a symbol of women’s worth and independence, erecting several statues and plaques in her memory and spreading the story of her accomplishments.