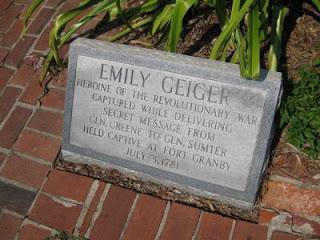 During the Revolutionary War, the Carolina colonies were invaded by the British in 1781. Patriot Generals Nathanael Greene, Thomas Sumter, Henry “Light Horse Harry” Lee, and Francis Marion were waging an all-out campaign to rid South Carolina of the British.

General Greene had spent 28 days trying to capture the fort at Ninety-Six, South Carolina, but had been forced to retreat when he discovered that British General Lord Francis Rawdon was coming with reinforcements. General Greene felt that Rawdon’s men were vulnerable to attack, but knew he lacked the manpower to win the skirmish.

General Greene hesitated to order any of his men – who were exhausted and weak from lack of proper food – to undertake such a ride. So he called for a civilian volunteer to carry the message. But no one could be found willing to run the risk of traversing a section of country that was infested with revengeful Tories.

About two miles from where General Greene had camped with his weary and disheartened troops, stood the residence of a well-to-do farmer named John Geiger, a loyal and outspoken patriot, but an invalid and unable to bear arms for his country. His eighteen-year-old daughter Emily was an ardent patriot as well.

Emily Geiger overheard her father and one of his friends discussing Greene’s dilemma and his call for a courier. Without saying anything to her father, she left the house and went to General Greene’s camp, asking to speak to the general personally. She bravely offered to carry his message to General Sumter.

Greene was understandably leery about sending a young woman on such a long and dangerous trip. Emily also stated that she was well acquainted with the route to be traveled, as she had been over it more than once. Desperate, Greene finally consented to let Emily go, wrote his message, and sent her on her way.

Unknown to Emily, a Tory spy had seen her leave General Greene’s camp. He reported her activities to a man named Lowry, who in turn sent a man to apprehend Emily. Unsuspecting, Emily continued her journey until she was forced to stop for the night and stay with strangers, who were secretly Tories – supporters of the British.

In the middle of the night, the man tracking Emily arrived at the house where she was sleeping. He decided to rest a few hours before taking custody of Emily. She figured out what was happening, and while the others slept she sneaked out the window, saddled her horse, and silently rode away. She pushed her horse as hard as she dared, knowing that the rider would be tailing her as soon as he woke.

Emily had made it about two-thirds of the way to General Sumter’s camp when she saw three British soldiers coming toward her. The sight of a young woman traveling alone from the direction of General Greene’s camp and on a well-lathered horse made them suspicious. When they questioned her, the soldiers became even more wary of Emily.

They took Emily captive and carried her before Lord Rawdon, whose camp was about a mile distant. He questioned Emily closely as to where she was from and where she was going. He considered her answers evasive, and ordered her to be locked up in one of the upper rooms of the guard house until a woman could be found to search her.

Emily agonized over what to do next. Being found with a message would mean she would be tried and probably hanged as a spy. The answer came to her suddenly. She memorized the words on the paper, and then bit by bit, she ate the message.

She choked the last bit down just as a woman appeared, prepared to search her and her clothing. Obviously, nothing of a suspicious nature was found upon her, and Lord Rawdon was honor-bound to permit Emily to continue her journey unmolested. He gave her an escort to a house a few miles distant, where she ate and rested a few hours.

With a fresh horse and a guide who could show her a shorter and a safer way, Emily set out, and, by riding all night they were far from Lord Rawdon’s camp. At sunrise the guide left her to continue her journey alone.

She rode on steadily, hot as it was, until 3 o’clock on the afternoon of the third day, she suddenly came upon a file of soldiers, whom from their dress she knew to be friends. They conducted Emily to General Sumter; hungry, weary, and almost fainting, she clearly and succinctly delivered her message. In an hour General Sumter was ready to march to meet General Greene.

After a few days of rest, Emily returned home to her father.