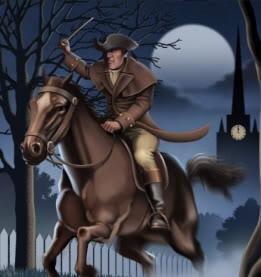 Lydia Mulliken was born sometime in 1753. Samuel Prescott was born in Concord, Massachusetts, on August 19, 1751. He had an older brother, Abel, Jr., and a sister, Lucy. In those days, there was no medical school, so young Samuel apprenticed with his father, Dr. Abel Prescott, for seven years. He opened his medical practice in Concord shortly before the Revolution.

Sometime during his apprenticeship, Prescott became an active member in the patriot movement and joined the Sons of Liberty. As a physician, he was exempt from serving in the militia, but he volunteered as a courier and delivered messages for the Committee of Correspondence.

On April 18, 1775, British General Thomas Gage sent 700 British soldiers to seize colonial arms stored at the town of Concord, some twenty miles outside Boston. On the way they would march through Lexington. The Patriot spies soon got the word out.

On the evening of April 18, twenty-three-year-old Dr. Prescott rode to Lexington to report to John Hancock and Samuel Adams on Concord’s readiness, its status in hiding supplies and munitions from the British, and its success in moving cannon to Groton to keep it from falling into British hands.

Wary of returning to Boston after a meeting of the Provincial Congress, which had met in Concord in defiance of royal bans on such meetings, Hancock and Adams were staying in Lexington at the Hancock-Clarke house. The British wanted not only the military stores at Concord, they hoped to arrest Adams and Hancock along the way.

After leaving the patriots, Prescott visited at the home of Miss Lydia Mulliken in Lexington. She had many suitors, reportedly being a woman of grace and beauty, but had recently accepted Samuel’s marriage proposal. They would soon be caught up in the beginning of the fight for the independence of the American colonies from Great Britain.

Lydia was the daughter of a well-respected Lexington clockmaker who had died in 1767, and she lived with her widowed mother, four brothers and two sisters in a home across road from Munroe’s Tavern. Her older brother, Nathaniel, worked their late father’s clock shop and was a member of the local militia.

Close to 1 o’clock in the morning on April 19, Prescott mounted his bay mare and and rode toward his home in Concord. On the road he met Paul Revere and William Dawes, who were also leaving Lexington after warning Hancock and Adams that the British were coming. Their next mission was to warn the citizens and the Minutemen that the British Regulars were on the march. Being recognized as a high son of Liberty and knowledgeable of the area, the doctor was asked to join them in their Midnight Ride.

Shortly thereafter, the three riders were surrounded by British soldiers who were part of a larger scouting party sent out the preceding evening. Revere, the one now commonly associated with the story, was captured immediately, but both Dawes and Prescott made a run for it.

Prescott escaped with a show of horsemanship and leaped over a stone wall into the forest. He was the only rider to reach Concord that night. Along the way, he stopped at his home and enlisted his brother Abel to carry the word to Sudbury and Framingham. Samuel rode on, alerting the town of Acton of the coming danger.

Dawes had escaped his pursuers, but only after a close chase and a little bit of luck. Once he was safe, Dawes considered circling around the patrol and racing on to Concord much as Prescott had, but he heard the Concord town house bell and knew Prescott had made it there.

Because of the midnight riders and countless other couriers, the Minutemen and Militia everywhere were on the ready, many marching toward Lexington and Concord to engage the British Army. Bells were rung and cannon fired to punctuate the danger at hand.

At dawn on April 19, Gage’s troops encountered 70 armed militiamen on the Lexington Green. When they saw how outnumbered they were, the colonial soldiers began to disperse. Somewhere, someone fired a gun. Then a volley of British muskets followed by a charge with bayonets left eight colonists dead and ten wounded.

The British regrouped and headed for the depot in Concord, destroying the colonists’ weapons and supplies. At the North Bridge in Concord, a British platoon was attacked by militiamen – it was the men of Acton who stood at the front of the forces at the Bridge.

Samuel Prescott witnessed the Battle of Concord, then tried to beat the British back to Lexington to see how Lydia Mulliken and her family were faring and to help care for the wounded.

After traveling to Framingham, Abel Prescott returned to Concord, just as the British Regulars were departing, and he was shot by a soldier. The injury never healed properly; Abel died in August 1775 at age 26.

While the British column fought its way toward Boston, a relief brigade arrived in Lexington and formed a defensive square near Munroe’s Tavern. Within the perimeter were the buildings of the Mullikens, who had fled to a neighbor’s house. As the soldiers retreated toward Boston, they burned the Mulliken home and shop to the ground, while Lydia watched.

Later, the Mulliken family submitted a damage bill to the Provincial Congress for some 431 pounds. Lydia’s brother survived the skirmish on the Green, only to die of camp fever at age 24 while with the army at Boston. Lydia and her family moved to another home in Lexington, and her love for Samuel Prescott continued.

British forces then began a long retreat from Lexington back to Boston and were harassed and shot at all along the way by farmers and rebels and suffered over 250 casualties. News of the events at Lexington and Concord spreads like wildfire throughout the Colonies.

Prescott’s Life After The Ride
After Dr. Prescott spent several days in the Lexington area treating wounded militia, he joined the Continental Army as a medic. He went with General Henry Knox to Fort Ticonderoga, and Prescott helped to liberate Boston from the British siege.

He then volunteered to serve on a privateer (a ship privately owned and crewed but authorized by a government during wartime to attack and capture enemy vessels). His ship was captured by the British in the North Atlantic, and he was sent to a prison in Halifax, Nova Scotia.

For years, no one knew what had happened to the brave Dr. Prescott. Then a returning veteran who claimed he had been Prescott’s cellmate told the story of how the doctor had died of cold and starvation in the Nova Scotia prison in 1777.

Nevertheless, Lydia Mulliken faithfully waited eight years for Samuel to return. As the Revolution ended in 1783, she abandoned hope of ever seeing him again. She married Joseph Burrell on March 18, 1783, then moved to Haverhill and raised a family.

The Prescotts paid a high cost for their courage and commitment to liberty. There is a Prescott Road in Concord that is presumably named for the patriots; there is also a Samuel Prescott road in Stow, Massachusetts, that will take a traveler to Acton’s Liberty Tree Farm – where Samuel Prescott ended his night of warning his countrymen. 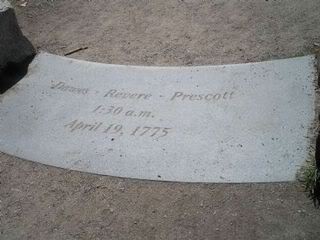 The phrase high son of liberty, associated with Dr. Prescott, comes from a 1798 letter from Paul Revere to Dr. Jeremy Belknap. The letter described his view of the events of April 18-19, 1775:

After I had been there [at the Hancock-Clarke house] about a half an hour, Mr. Daws (sic) came; we refreshed ourselves, and set off for Concord. We were overtaken by a young Dr. Prescott, whom we found to be a high Son of Liberty… I likewise mentioned that we had better alarm all the inhabitants till we got to Concord. The young doctor much approved of it and said he would stop with either of us, for the people between that and Concord knew him and would give more credit to what we said.

Samuel Prescott’s Ride is re-enacted every Patriot’s Day (usually the third Monday of April) in the Town of Acton. The re-enactment begins in East Acton, continues through Acton Center, and ends at Liberty Tree Farm, where once was the home of a minuteman named Simon Hunt. The distance is approximately five miles (8 km).

Artist Thomas Sully produced three paintings portraying the April 19th story of Samuel and Lydia. Though not historically accurate, they depict the courting, receiving news that the British were on the march and bidding good-bye as he begins his ride. These paintings were once at the Bennington, VT Historical Museum and Art Gallery but now are lost.