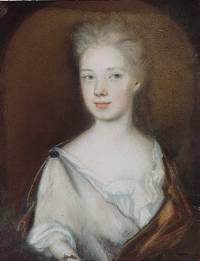 Early in the 18th century, many of the portraits of colonial gentle ladies were done by Henrietta Johnston (1670-1729), the first female portrait painter in the American colonies. Surprisingly, she did not use oils or watercolors, but French pastels – a relatively new medium at that time. Johnston rendered the facial features with precision and blended colors skillfully, particularly in the hair.

Henrietta De Beaulieu was born to a French Huguenot family in Dublin, Ireland in 1670. At the age of 10 or 12 she fled with her Huguenot family to England from France to avoid persecution. In 1694, she married Robert Dering, the fifth son of Sir Edward Dering, and moved to Ireland. Their marriage application dated March 23, 1694, describes Henrietta as a maiden of about twenty from the Parish of St. Martin-in-the-Fields.

Johnston’s earliest identified extant works are from about 1704 Ireland. The pastel portraits she drew during this period were mostly of members of her husband’s extended family. When her first husband Dering died, she became a widow with two daughters.

In April 1705, Henrietta wed the Reverend Gideon Johnston, a graduate of Trinity College, Dublin, who was to become rector of St. Philip’s Church in Charleston, South Carolina in 1708. During the trip to America, a stopover was made in the Madeira Islands, and the reverend went ashore and returned too late, and literally “missed the boat.”

To make matters worse, upon arrival, Henrietta found the parishioners had appointed their OWN rector who, along with his family, wasn’t in the mood to depart the pulpit OR the parsonage.

Charleston was a fledgling town at this time, quickly becoming the largest city and the leading port in the South. Many French Protestant Huguenots, seeking religious freedom, were moving to Charleston, where they began building fine townhouses along the harbor’s edge and wanted portraits to grace their hallways and establish their family’s presence as a power.

Yet even after her husband finally managed to make it to Charleston to join her, life was not easy. In ousting the elected rector from his pulpit, Gideon Johnston became bogged down in church politics. The couple was beset by poverty and illness, and Henrietta had to serve as her husband’s secretary, keep the house and care for the children.

Henrietta’s training and background would suggest she was at best a talented amateur who had a knack for portrait painting. She was one of the few (if not the only ) portrait artist in town, and quickly found her skills much in demand, drawing pastel portraits of many of Charleston’s French Huguenot residents. “Were it not for the Assistance my wife gives me by drawing of Pictures, I should not have been able to live,” Gideon Johnston wrote in 1709.

Deeply in debt, Henrietta worked hard to help make ends meet. So hard, in fact, that by the spring of 1711, she had run out of art supplies. Fortunately, her husband’s congregation had some important papers to send to the Bishop in London. Afraid that their indebted, unpopular clergyman might skip out on his financial obligations, the church sent Henrietta.

The trip took three years, allowing Henrietta to restock her art case with the French pastels she preferred. Throughout her career she typically used 9″ x 12″ sheets of paper in simple wooden frames, which she signed and dated on the back.

Shortly after her return, her husband was killed in a boating accident. Henrietta never remarried.

Johnston’s work remained popular for many years, at one point taking her to New York to fulfill commissions – a working artist who became the first professional female artist on this side of the Atlantic.

Some 40 portraits of prominent people in Charleston, South Carolina, are known, most created between 1707 and 1720. Her body of work is an important documentary of leading people in an important area in American history, and about 30 of her works survive.

Henrietta Johnston died in 1729 at Charleston, South Carolina, and was buried there.