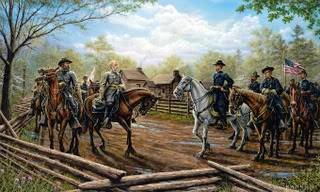 In 1846 at age 40, James Bennett, his wife Nancy and their three children settled on a 325-acre farm in north-central North Carolina that came to be known as Bennett Place. The family grew corn, wheat, oats, and potatoes, and raised hogs. James was also a tailor, cobbler, and sold horse feed, tobacco plugs and distilled liquor.

On April 15, 2010, Bennett Place State Historic Site unveiled this 44″ X 64″ oil painting by Civil War artist Dan Nance, which captures the moment of that meeting is captured in Nance’s oil painting. “Johnston was neat and proud. Sherman had been traveling a lot and was muddy and untidy. The painting captures that, and the Bennett house nearby,” says Nance.

Prelude
After completing his controversial march from Atlanta to Savannah, General William Tecumseh Sherman turned his army of 60,000 north. In March 1865 he entered North Carolina. Living off the land and destroying public buildings and factories, the Union commander brought his “total war” policy to a state that had been slow to secede.

Sherman advanced into North Carolina in early March 1865, and moved toward Goldsboro, where supplies and additional troops awaited him. CSA General Joseph E. Johnston, commanding the Army of Tennessee, failed to stop Sherman’s advance at the Battle of Bentonville (March 19–21, 1865).

Meanwhile Sherman, unchecked but needing reinforcements, continued to Goldsboro where his army remained encamped until April 10. Realizing that Confederate resistance was near collapse, Sherman asked President Lincoln for his direction on terms of surrender and the treatment of Confederate troops. Sherman shared Lincoln’s attitude of leniency for a defeated South.

Seeking to avoid capture in Virginia, CSA President Jefferson Davis had fled Richmond and arrived in Greensboro, North Carolina, on April 11, 1865, and summoned Johnston to assess the strength of his army. Though Davis felt the South could continue the war, the confirmation of Robert E. Lee’s surrender in Virginia on April 9 prompted him to allow Johnston to confer with Sherman.

Johnston, whose army was still an active fighting force encamped in Greensboro, realized he could not continue the fight now that Lee had surrendered his troops. Johnston sent a courier to the Union troops encamped at Morrisville, with a message 0 proposing a meeting for April 17 and Sherman accepted.

Johnston, escorted by a detachment of some 60 troopers of the 5th South Carolina cavalry, traveled east toward Durham Station, while General Sherman was riding west to meet him with an escort of 200 troopers of the 9th, 13th, and 15th Pennsylvania Cavalry.

On April 17, 1865, Sherman and Johnston, adversaries of long standing, met for the first time midway between Johnston’s headquarters in Greensboro and Sherman’s headquarters in Raleigh, seven miles from Durham Station. Shaking hands while still mounted, they greeted each other in a courteous manner.

Dismounting, Johnston suggested they sit down together at Bennett Place, a short distance away. This unassuming farm featured a simple farmhouse, a kitchen, a smokehouse and a garden. While General Sherman and General Johnston met, the Bennett Family retired to the kitchen house.

The Negotiations
As soon as they were alone, Sherman showed Johnston a telegram he had received that morning, announcing the assassination of President Abraham Lincoln three days earlier. Unaware of the difficulties this tragedy might create for them, the generals began their conference.

Sherman was prepared to offer terms like those Grant gave Lee – military terms only, the surrender of the vanquished to the victor. But Johnston wanted “to arrange the terms of a permanent peace,” including political terms. Sherman, in keeping with Lincoln’s wishes for a compassionate and forgiving end to the war, agreed to military and political issues.

At the second meeting on April 18, Sherman submitted “a basis of agreement” which Johnston accepted. This liberal document provided for an armistice terminable at 48 hours notice, disbanding armies following the deposit of arms in state arsenals, recognition of state government, establishment of federal courts, restoration of political and civil rights, and a general amnesty.

Jefferson Davis approved these terms, but Union officials rejected them because of hostilities in Washington, DC, following Lincoln’s assassination, and some Union leaders were bitter. General Ulysses S. Grant instructed Sherman to renegotiate terms similar to those given Lee. Davis opposed the new terms and ordered Johnston to disband his infantry and escape with his mounted troops.

To save his soldiers from the tragedy of a prolonged war, Johnston disobeyed his orders and met Sherman again at Bennett Place on April 26, 1865. The generals signed the final papers of surrender, disbanding all active Confederate forces in North Carolina, South Carolina, Georgia and Florida, totaling 89,270 soldiers, the largest troop surrender of the Civil War. The mustering out of the troops and the issuing of paroles took place in Greensboro.

COMRADES: I earnestly exhort you to observe faithfully the terms of pacification agreed upon; and to discharge the obligations of good and peaceful citizens, as well as you have performed the duties of thorough soldiers in the field. By such a course, you will best secure the comfort of your families and kindred, and restore tranquillity to our country.

The surrender spared North Carolina the destruction experienced by her neighboring states. Equally important, troops in the area were introduced to North Carolina bright leaf tobacco, which was distributed by the soldiers. This led to a manufacturing and marketing revolution that gave a boost to the development of Durham and the economy of the entire state.

The Aftermath
James and Nancy Bennett were like many families who suffered tremendously during the four years of war. They lost three sons. Lorenzo, who served in the 27th North Carolina, was buried in Winchester, Virginia. Alphonzo is currently unaccounted for in the family history. Son-in-law Robert Duke, husband of their daughter Eliza, died in a Confederate army hospital and was buried in Lynchburg, Virginia.

The Bennetts never fully recovered from the war. Age and the loss of available labor compelled them to enter into a sharecropping agreement with their in-laws. They stopped farming in 1875, James died in 1878 and the family moved into the new community of Durham to begin a new life.

The Bennett farm was abandoned and fell into ruin. In 1921 a fire destroyed the farmhouse and kitchen; only the stone chimney survived. In 1923, the Unity Monument was erected to commemorate the historic event that took place here. In the 1960s, the Bennett Farm was fully reclaimed and restored by local preservationists, and was later turned over to the State of North Carolina.

Today, Bennett Place State Historic Site is located on the west end of the city of Durham near Duke University in north-central North Carolina. It is open to the public Tuesday-Saturday, 9am-5pm, with a visitor center, museum, research library and theater presentation: Dawn of Peace. Living history programs and the reenactment of the surrender take place throughout the year.

The buildings at the historic site were carefully reconstructed in the 1960s, using Civil War sketches and early photographs as a guide. The simple farm dwelling, built around the original stone chimney, and the log kitchen show what life was like during a tragic period in our nation’s history.