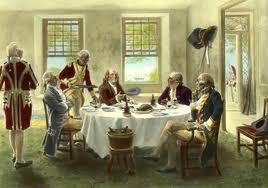 Henrietta Middleton was born on November 15, 1750, at Charleston, South Carolina. Henrietta was the daughter of Henry Middleton, the second president of First Continental Congress, and the sister of Arthur Middleton, a signer of the Declaration of Independence.

Edward Rutledge was born on November 23, 1749, at Christ Church Parish, South Carolina. He was the youngest of the seven children born to Dr. John Rutledge, who had emigrated from Ireland to South Carolina around 1735, and Sarah Hext Rutledge. Dr. Rutledge died on December 25, 1750, leaving Sarah a widow with seven children, at the age of 27. Sarah’s father had left her substantial lands, two homes in Charleston, a 550 acre plantation at Stono, and 640 acres in Saint Helena Parish in Granville County, South Carolina

After acquiring a classical education, Edward studied law with his older brother John, who guided him in his career as a lawyer. In 1769, Rutledge was entered as a student at the Temple, a prestigious school in London, England. He attended the courts of law and the houses of parliament for four years, and listened to some of the most distinguished orators of the day, in court and in Parliament.

Rutledge returned to Charleston in 1773 and built a successful law practice with his partner, Charles Cotesworth Pinckney. Edward’s mother, Sarah Hext Rutledge, gave him a 640-acre plantation in Saint Helena Parish that she had inherited from her father, and thus enabled him to meet the property qualification for election to the Commons House of Assembly.

During his first year of practice, Rutledge won Whig acclaim by obtaining the release of newspaper publisher Thomas Powell, who had been imprisoned by the Crown for printing an article critical of the Loyalist upper house of the colonial legislature.

On March 1, 1774, Edward Rutledge married Henrietta Middleton, and subsequently built a home in Charleston across the street from the house of his brothers, John and Hugh. Henrietta gave birth to three children, two of whom survived to adulthood: Henry Middleton Rutledge and Sarah Middleton Rutledge.

The same year, Rutledge was selected as one of five Delegates to the First Continental Congress. He did not make too favorable an impression at the first meeting, and excited the scorn of John Adams, never an admirer of the South Carolinians.

Edward Rutledge Signature
On the Declaration of Independence

Although a firm supporter of colonial rights, Edward Rutledge was initially reluctant to support independence from Great Britain, hoping instead for reconciliation with the mother country. Like other Southern planters, Rutledge did not want the Revolution to change the social structure of the South. He led the successful effort to have wording removed from the Declaration of Independence that condemned slavery and the slave trade.

On September 26, 1775, Rutledge moved that General George Washington be instructed “to discharge all the Negroes as well as Slaves as Freemen in his Army.” Rutledge was worried about the example that armed black men would furnish to slaves in the South. In January 1776, Washington and his chief advisers decided to enlist no more blacks, a policy endorsed by the Congress.

In June 1776, Rutledge was chosen to represent South Carolina on a committee to draft the country’s first constitution, the Articles of Confederation. The Confederation was heatedly debated by the Congress for many months with regard to representation, state boundaries, taxation, and the powers of the new central government. The Articles were not completed and signed until November 15, 1777.

In March 1776, South Carolina had adopted a new state constitution; that same month the provincial assembly had empowered its delegates to vote for independence if they so desired. Yet Rutledge firmly believed that the Colonies should first confederate and nurture foreign alliances to strengthen themselves for the perilous step they were about to take.

When a trial vote was taken on July 1, the South Carolina delegates voted no. Rutledge then asked for a one day postponement of the vote and met with his South Carolina colleagues that night. He persuaded them to support Lee’s motion, and next day South Carolina reversed its course, making the official vote for independence unanimous, 12 to 0, with New York abstaining.

Edward Rutledge signed the Declaration of Independence with the other delegates on August 2, 1776. At age 26, he was youngest delegate to sign that important document. This simple act – considered treasonous by the British – put his entire future at risk. Yet Rutledge and his colleagues pledged “our Lives, our Fortunes and our sacred Honor.”

Edward Rutledge was appointed on the first Board of War. He, John Adams and Benjamin Franklin were sent to confer with Lord Richard Howe about Howe’s proposals for a reconciliation. The representatives met the British admiral on Staten Island on September 11, 1776, but refused to negotiate with him unless he recognized American independence.

After the meeting, Rutledge wrote to General Washington, whom he greatly admired:

I must beg leave to inform you that our conference with Lord Howe has been attended with no immediate advantages. He declared that he had no powers to consider us as Independent States, and we easily discovered that were we still dependent. we should have nothing to expect from those with which he is vested. He talked altogether in generals, that he came out here to consult, advise and confer with gentlemen of the greatest Influence in the colonies about their complaints…

This kind of conversation lasted for several hours, and as I have already said without any effect… Our reliance continues therefore to be (under God) on your wisdom and fortitude and that of your forces. That you may be as successful as I know you are worthy is my most sincere wish… God bless you my dear Sir.
Your most affectionate Friend,
E. Rutledge

Rutledge returned home in November 1776 to enlist in the army and help defend his colony. He became a member of the Charleston Battalion of Artillery, participated in several important battles, and attained the rank of Captain.

In 1778, Rutledge accepted a seat in the State legislature, and the next year won reelection to Congress, though military duties prevented his attendance. In February 1779, he took part in General William Moultrie’s defeat of the British at Port Royal Island, SC, and fought at the Battle of Beaufort. The colonial legislature sent him back to Congress in 1779 to fill a vacancy, but military duties prevented his attendance.

In 1780, when the British conducted a third invasion of South Carolina, he resumed his post as Captain in the defense of Charleston. The British considered Edward Rutledge a dangerous proponent of open rebellion in the South. While some citizens retained their freedom by pledging loyalty to the King, Rutledge never wavered.

When Charleston fell, along with his brother-in-law Arthur Middleton, Rutledge was captured. He was taken from his home and imprisoned in St. Augustine, Florida, where he was held for a year. After he was released, he resided in Philadelphia until the British withdrew from South Carolina.

On the evacuation of Charleston, he returned to his home and resumed professional practice, which he continued with success for seventeen years. During that time, he was an active member of the state legislature, where he served until 1796. He effectually resisted the efforts that were made to revive the slave trade as long as he had a voice in the public business of the state.

He had always been thought a genial and charming gentleman, and no doubt he mellowed with the years. In private life, he flourished, his wealth increasing through his law practice in partnership with his now brother-in-law, Charles C. Pinckney, and investments in plantations.

When President George Washington made a tour of southern states in the Spring of 1791, Edward Rutledge was frequently among the dignitaries who escorted him around during his Charleston visit. The Washington administration relied heavily on the Rutledge and Pickney families when considering appointments to office from South Carolina.

Henrietta Middleton Rutledge died on April 22, 1792, at Charleston, South Carolina, at the age of 41, the same day Edward’s mother died.

Later that year, Edward married widow Mary Shubrick Everleigh. Her former husband was Comptroller of the Treasury of the United States in Washington’s administration. They had no children.

President Washington offered a Supreme Court Justiceship to Rutledge in 1792, Secretary of State in 1793, and minister to France and Associate Justice of the United States Supreme Court in 1794, but his personal affairs kept him from accepting.

In December 1798, Rutledge ran for and was elected Governor of South Carolina. He traveled to Columbia for an important meeting, but had to be sent home because of an attack of gout.

When his friend George Washington passed away on December 14, 1799, the news of his death so upset Governor Rutledge that he suffered a stroke.

Edward Rutledge died on January 23, 1800, at Charleston, SC, at the age of 50. His loss was mourned by the people of Charleston and South Carolina. Still in his first term as Governor, he was given an elaborate military funeral, and was buried in the family plot in St. Philip’s Churchyard.

In 1969, an historical marker was installed at the entrance to St. Philip’s Churchyard by the South Carolina Daughters of the Revolution, honoring both Edward Rutledge and Charles Pinckney.

Edward Rutledge was a main character in the play, 1776, in which he sings the song Molasses to Rum about slavery and the Triangle Trade. He is depicted as the secondary antagonist in the play, (the principal antagonist being John Dickinson of Pennsylvania), in obstructing the play’s heroes – John Adams, Benjamin Franklin and Thomas Jefferson. Rutledge was portrayed by Clifford David in the original Broadway production, and by John Cullum in the 1972 film. In the 2008 miniseries, John Adams, Rutledge was portrayed by Clancy O’Connor.

In Washington, DC, near the Washington monument, there is a memorial park celebrating the signers of the Declaration, and one of the 56 granite blocks there is engraved with the name of Edward Rutledge. In the Rotunda at the National Archives nearby, Rutledge appears in the mural painting by Barry Faulkner, in the second row, second from the left. In the famous painting by John Trumbull, The Declaration of Independence, in the Rotunda of the US Capitol, Rutledge is shown on the right in a group of three standing delegates.