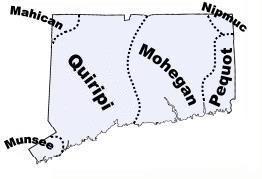 There were originally many small American Indian tribes in Connecticut, including the Nipmuc, Mohegan, Pequot, and the Niantic. Though all of them spoke related languages and shared many cultural similarities, each tribe had its own leadership and its own territory. European epidemics and warfare devastated the Connecticut Indians, and the survivors had to merge with other tribes to survive. All of their languages have been lost, but native people continue to preserve their cultural heritage in Connecticut today.

Nipmuc
The northeast section of Connecticut and part of Massachusetts was occupied by the Nipmuc tribe. This group actually includes four tribes or bands – the Nipmucks, Nashaways, Quabaugs, and Wabaquassets. Since the Nipmuc homeland starts only thirty miles west of Boston harbor, contacts with English colonists began almost immediately after the Pilgrims landed at Plymouth in 1620 and increased dramatically after the settlement of Massachusetts Bay by the Puritans in 1630. Boston traders reached the Connecticut River in 1633, and Puritan missionaries were close behind them.

Large purchases of Nipmuc land by the Puritan colonists during the 1640s and 1650s steadily eroded the tribe’s land base, but unregulated settlement (squatters) took even more. Whites took the best farm lands in the river valleys leaving the Nipmuc – who depended heavily on agriculture – unable to properly feed themselves. After 1640, the Nipmuc got Christianity from John Eliot and other Puritan missionaries. After their involvement in King Philip’s War (1675), the Nipmuc were forced to flee their homes, and their lands were redistributed among the settlers.

Mohegan
The southeastern section of Connecticut was occupied by the Mohegan and Pequot tribes. Often these two groups were thought of as one group, but the name Mohegan probably referred to a particular Pequot clan that eventually gained control of the Pequot Nation. The Pequot, Montaukett, Narragansett, Niantic, Nipmuc, and Shinnecock that were referred to indiscriminately as Mohegan were originally distinct tribes, each with several autonomous bands.

The Mohegan and the Mohican were not the same tribe. They were kinfolk and shared many cultural traits, like other Algonquian peoples of New England, but they were no more closely related to each other than other New England tribes whose names were less confusingly similar. The Mohegans called themselves Mahiingan, meaning wolf, and the Mahicans called themselves Muheconneok, which was their name for the Hudson River.

Though most of the Mohegan tribes quietly assimilated into New England society, they never gave up their identity, and have retained several small reservations in Connecticut, Rhode Island, and Long Island. In recent years the Connecticut Pequot and Mohegan tribes have become some of the wealthiest Native American bands due to successful management of tribal casinos.

Pequot
The Pequot Chief, Sassacus, ruled both the Pequot tribe and the Mohegan tribe. The division into two distinct tribes seems to have been accomplished when a subordinate chief named Uncas rebelled and withdrew into the interior with a small group of followers, and the Mohegan gained their independence.

At first, British settlers and the Pequot lived together peacefully, but more colonists came, and the aggressive manner in which they claimed more and more land upset the Pequot. The Pequot soon found themselves stuck between the Narragansett Bay and the Connecticut River, and resentment began to grow within the tribe.

Before their conquest by the English in 1637, the Pequot were the most dreaded of the southern New England tribes. 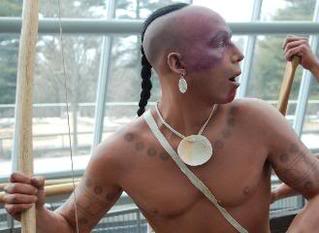 Statue of an 18th Century Pequot Man
At the Pequot Museum

The tribal name Nehantickmeans long-necked waters, believed by local residents to refer to the peninsula of land now known as Black Point in Long Island Sound. These natives likely spent their summers there fishing and digging for shellfish. They lived on corn, beans, and squash, supplemented by hunting, fishing, and gathering.

The Pequot War resulted in almost total destruction of the Western Niantic, whose 100 remaining members merged into the Mohegans and Pequots. Some of the Niantic who joined the Mohegan and Pequot fled west to escape further English harassment.

Quiripi Language
The language of the Quiripi tribes of Western Connecticut and southern Long Island has been extinct for more than two centuries. The Quiripi language was certainly Algonkian and seems to have been closely related to the Mohegan dialects. The Quiripi-speaking tribes were devastated by smallpox and other European diseases. Some villages suffered more than 90% casualties.

Connecticut Native American Culture:
Agriculture
The Indians of Connecticut were a resourceful people who made extensive use of the land’s riches. They were hunter-gatherers, and they were farmers. They were capable of cultivating maize, beans, squash, pumpkins, artichokes, and tobacco. Everyone in the tribe worked at turning up the soil in the fields. Their tools were simple: sticks, clamshells, and the shells of horseshoe crabs. After the planting was finished, the women would had the responsibility of caring for the crops, except tobacco which was cultivated by the men. It was customary to fertilize the land with fish.

Gathering
The Indians used various nuts and berries for food – like walnuts, chestnuts, and acorns. They were often boiled and eaten, or ground up and used in breads. Wild strawberries, gooseberries, and huckleberries were also part of their diet. These were eaten raw or mixed in corn meal.

Hunting
Tribes that lived near a river or on the Sound fished in the summer months, and hunted for deer and moose in the fall and winter. If fishing wasn’t available, they subsisted on land animals throughout the year. Weapons and snares were used to catch their prey – deer, moose, raccoon, rabbit, squirrel, otter, and beaver. Bows were made of hickory, and arrows were fashioned from reeds and tree branches with sharp stone points at the end. Snares were made with hemp rope and small bendable trees. With spears and nets, many of them feasted on fluke, lobster, bluefish, salmon, bass, and cod.

Dress
In the summer, the most common type of dress was the breechcloth, which was made from squares of skin that was attached around the waist with a snakeskin. Sometimes they wore leggings or a mantle around their shoulders. Male children went naked until about twelve years old, and female children wore a small breechcloth from birth.

The skins were sometimes decorated with paintings. Winter dress was made of skins that were fashioned into leggings, moccasins, and robes. The robes were made of furs and skins from deer, bear, moose, beaver, and fox.

They often decorated themselves, by wearing feathers and seashells in their hair, and painting their faces and other parts of their bodies. Some were tattooed by scratching themselves with a sharp object and adding a dye to the open sore. Earrings, necklaces, and bracelets were commonly worn by males and females.

Native American Homes
The most common shelter built by the Native Americans of Connecticut was dome-shaped. The men collected saplings and placed them in the ground in an upright position. The saplings formed a circle of from ten to sixty feet in diameter, and were then bent and tied together to form the dome. Tree bark and large mats woven by the women were placed over the saplings. A hole was cut in the top to allow the smoke of the campfire to escape. Entrance to the wigwam was made from the skin of an animal hung over an opening.

Travel
The tribes changed their eating and hunting habits according to the seasons. Footpaths to and from their favorite hunting and fishing grounds were the most used mode of travel. Using little more than a stone ax and muscle, an Indian brave could make a dugout canoe. This was the simplest and most widely used type of boat. Birch bark canoes were also used, but were not as common as the dugout.

Puritan Colonists
Many British people believed that the Church of England had become corrupt, and they had split into various factions that were experiencing religious persecution in their homeland. Conditions became so intolerable that a group of Separatist Pilgrims migrated to the New World, and established Plymouth Colony. The largest faction believed that changes should be made from within the church. They were called Puritans, and they were eager to return power to the members of the congregations by having ministers, elders, and other officers elected by the congregation.

Thomas Hooker, the Father of Connecticut, was a lecturer in the Church of England. He was a powerful and popular preacher, but he was constantly warned by his superiors to curtail his Puritan tendencies. He fled from England in late 1629 and went to Holland, but he didn’t stay long. The promise of a fresh start in the New World attracted his attention, and he return to England to settle his affairs before sailing to New England. By disguising himself, Hooker was able to make his departure for Massachusetts aboard the ship, Griffin.

Shortly after they arrived, Thomas Hooker and his congregation were ready to leave the Massachusetts Bay Colony and settle in the rich lands of the Connecticut River Valley, because living conditions were becoming cramped in the Boston area. The land around the Connecticut River was spacious enough for cattle raising and agriculture. In June of 1636, Thomas Hooker and 100 people, 160 head of cattle, and a number of goats and swine left for Connecticut. They settled an area they called Newtown (now Hartford). The trip took them more than two weeks, traveling ten miles a day.

The Pequot War
In 1633, a small English trading party was wiped out by the Pequots, and they had other skirmishes with Dutch traders during this period. Fearing reprisals, the Pequots sent emissaries to Boston to assure the English that they still wished to carry on trade with them. They offered to give up those who were guilty of the slaughter in return for peaceful relations. Peace was effected, but not for long.

In 1636, John Oldham, an explorer and trader, went on a trading expedition. When his vessel was close to Block island, it was overrun by Indians who killed everyone aboard. A special expedition was then dispatched under the command of Captain John Endecott. They discovered that the Block Island Indians, not the Pequot, had slaughtered Oldham’s party, but the Pequots had given refuge to the perpetrators. Endecott’s party wiped out Pequot villages, and burned their homes and crops, which led to further hostilities.

In April 1637, a party of Pequots traveled up the Connecticut River, and attacked the settlers there, killing six men and three women. Governor John Winthrop of Massachusetts Bay Colony was urged by many to undertake an action against the Pequot. On May 1, 1637, the General Court at Hartford ordered an attack, and Captain John Mason was put in charge of a force of about ninety men. After a fierce engagement, many Pequot were killed, but some escaped. Those who survived fled westward toward the Hudson River.

Mason’s group was joined by at least 200 men from Massachusetts, and together they pursued the fleeing Indians, whose travel was impeded by their women, children, and elderly. In a swamp in Fairfield, the English surrounded the tribe. Thomas Stanton, who knew the Indian language, convinced the tribal leaders to allow their women, children, and elderly to leave. A pitched battle followed, and all but sixty or seventy Pequot were killed.

Most of the captured warriors were executed, and the English sold the remainder as slaves to the West Indies. Some of the women and children were distributed as servants to colonial households in New England.

Due to heavy population losses and aggressive colonial expansion, the Native American tribes of Connecticut were scattered, merged, and assimilated to such a degree that they lost their languages and much of their individual tribal character.