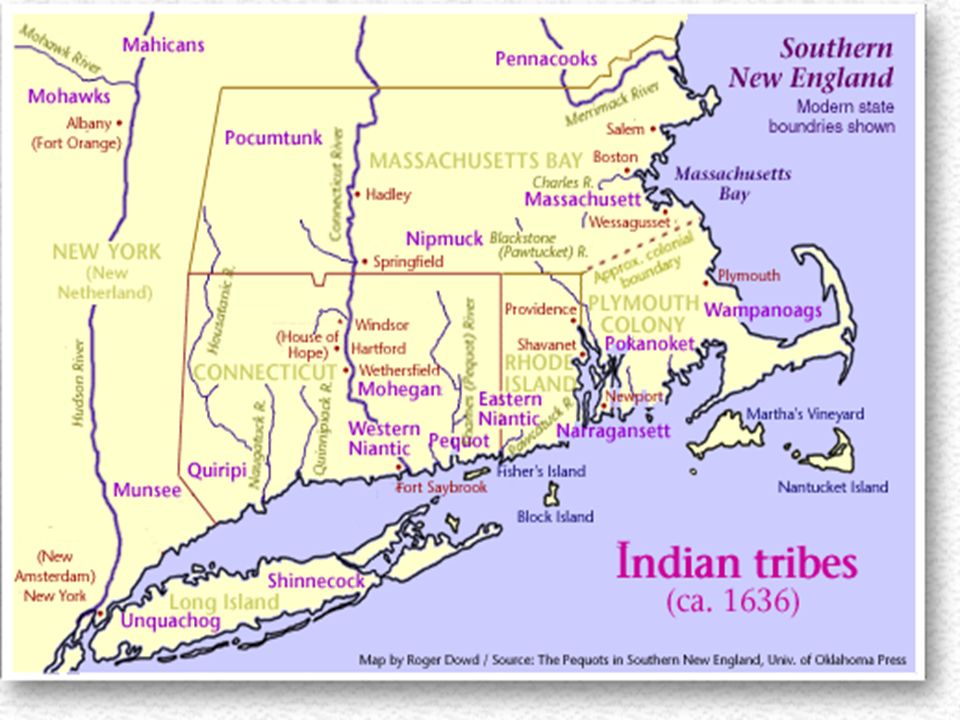 By the time of early European colonization attempts, there were over 30,000 Native Americans in Massachusetts living amongst a variety of tribes belonging to the Algonquin language group. Some of the most well known tribes were the Wampanoag, Pequot, Nipmuck, and the Massachuset. They lived in small bands and had no supreme chief.

Unfortunately, the Europeans would bring with them diseases that the Native Americans had no immunity against, resulting in large deadly epidemics. The Native population continued to suffer from disease and warfare throughout the remainder of the 17th century. Nearly ninety percent of the Native population were killed during that period.

When English immigrants set sail for the New World in the early seventeenth century, many of them believed that they would be settling what Pilgrim William Bradford called “a vast and unpeopled country.” But when they arrived in America, they found a developed region with a large population of Native Americans.

The Puritans began to arrive in 1629, and their religion affected their attitudes toward Native Americans. They considered Native Americans inferior because of their primitive lifestyle, but many thought they could be converted to Christianity.

The natives found Puritan conversion practices coercive and culturally insensitive. Accepting Christianity usually involved giving up their language, severing kinship ties with other Natives who had not been saved, and abandoning their traditional homes.

Indian Lifeways
The Native Americans were efficient farmers—cultivating maize, squash, pumpkins, and beans in the same fields. This baffled the Europeans, whose grew each crop in a separate field. They didn’t realize that the Native American way provided a balanced diet and replenished the soil. Each year, the native people also burned the undergrowth of the forests, making them easier to move through, and killing vermin.

Their mobile way of life meant that Native Americans had few possessions and shared what little they had. They valued generosity rather than hoarding their assets, and the chiefs acquired honor through feasting and entertaining other chiefs. No one worked for wages and they didn’t lock their homes. Theft was unknown. No one starved unless everyone starved.

Native Peoples developed different strategies for dealing with the European settlers who began descending on their land in the seventeenth century. Some resisted, some fled their traditional homelands, and some made compromises.

This Land is My Land
The English valued everything in monetary terms. The Native Americans’ goal was to live in harmony with nature. While the Native Americans tried to make political alliances with the colonists, the Europeans were more interested in grabbing as much land as possible.
The Native Americans’ social hierarchy was not based on property ownership. They lived in different areas during the year, depending on the season. Their mobile lifestyle meant that their homes had none of the possessions that were the sign of status in Europe. Using matting, bark and pelts, they lived in easily built lodges.

Relationships between the two groups were troubled by disagreements over land use and land rights. Part of the problem stemmed from their different attitudes toward land ownership. To the New England Natives, selling land did not mean granting exclusive, eternal ownership to the buyer. It simply involved accepting a new neighbor and sharing their resources.

The Puritans, though, were committed to private property ownership, and expected the Natives to immediately and permanently vacate their land upon its sale. Some settlers thought they were entitled to Native American lands, because the natives were squandering the land’s potential by failing to enclose it for pasture or to farm it in the English manner.

These problems were compounded by the Puritans’ increasing conviction that the Indians’ claims were invalid, because God had bestowed New England upon the English. By 1676, the minister Increase Mather wrote about the Puritans’ property rights over “the Heathen People amongst whom we live, and whose Land the Lord God of our Fathers has given to us for a rightful possession.”

Trade had an equally significant impact. To make a profit, the colonies had to export materials back to England. These included furs, which were very valuable in Europe. In exchange for furs, the colonists gave the Native Americans metal implements, such as axe-heads and knives.

War Is Hell
In 1636, the Pequot War exploded between the New England settlers and the Narragansett and Mohegan Indians living in Connecticut and Massachusetts. But instead of the native style of warfare, which took hostages but had few casualties, the Europeans massacred the Native Americans, including women and children. These terror tactics shocked the First Nation people.

Captain John Underhill chronicled the Pequot War of 1637 in his News from America (1638), providing a sketch of the Puritans, along with their Narragansett allies, encircling and destroying a Pequot village.

Puritan-Indian hostilities erupted again in 1676 with King Philip’s War, one of the most devastating wars in American history. Former Puritan allies like the Narragansetts banded together with other Algonquian tribes to oppose the English.

In her narrative of captivity among the Indians during King Philip’s War, Mary Rowlandson frequently employs Puritan demonizing rhetoric, calling her captors infidels, hell-hounds, and savages. She reserves a special hatred for Native Americans who had experienced Christian conversion—whom she called Praying Indians.

Forced Removal to Boston Harbor Islands
King Philip’s War had far-reaching effects on Native American communities in the region and their relations with the Europeans. Prior to the start of the war, a number of praying towns had been established within Massachusetts Bay where natives were living peacefully with their English neighbors.

During the winter of 1675-76, the Massachusetts Bay Colony decreed that the inhabitants of the praying towns must be relocated. On October 30, 1675, a large body of Christian Indians were forced in shackles to the Charles River. There they boarded three vessels and were transported to the islands in the Boston harbor. The majority of those relocated were taken to Deer Island where they were incarcerated.

Historical records indicate that as many as one-half of these Native Americans died of starvation, exposure, and lack of medical care in what have been called concentration camps. The General Court of Massachusetts, referring to Native Americans on the islands, proclaimed “that none of the said Indians shall presume to go off the said islands voluntarily, upon pain of death.” After the war, those who survived the island internment continued to have poor relationships with the colonies.

English victories in both of those wars and the ravaging effects of European diseases resulted in the depletion of Native American populations in New England, and enabled the Puritans to seize most of the remaining Indian lands in the region. By 1670, there were 52,000 colonists in New England, and they already outnumbered the indigenous people by three to one.

Give Peace a Chance
Unfortunately, we don’t have extensive records from a Native American perspective. But some written accounts, pictographs, archaeological evidence, and transcriptions of oral traditions survive to give an indication of what Indians thought about the English settlers in New England.

Some of the most interesting records that remain were at Natick, a praying town east of Boston. Established in 1651 by missionary John Eliot, Natick consisted of English-style homesteads, three streets, a bridge across the Charles River, and a meetinghouse, which housed the school and the governing body. The Indian residents of Natick were taught to read and write in their native language of Massachuset, using letters from the Roman alphabet.

In the colony of Pennsylvania, William Penn and the Quakers demonstrated that Indian-European relations did not have to be based on intolerance or violence. Penn showed respect for Native American culture, pledged to treat Native Americans as equals, and acknowledged their land rights. As a result of their commitment to tolerance and mutual respect, the Quakers and their Native American neighbors lived in peace for over half a century.