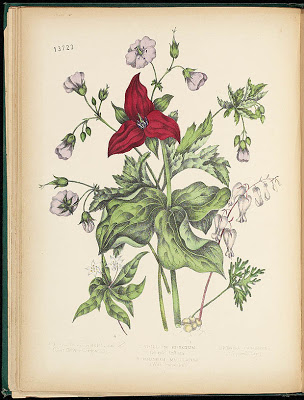 Canadian gardens are in many ways a new idea. Our history is a short one spanning 400 years or so and those who arrived before us certainly did not garden in today’s sense of the word. For those early settlers and the indigenous people already on the land, gardening meant agriculture. It meant survival. Today a Canadian garden is no longer an oxymoron. Canadians have now lived in this beautiful country long enough to have thrown off the cultural ties that bound their gardening style to parts of Europe and instead have integrated these ways into something inherently Canadian.

The indigenous peoples of North America are known for their great medicinal success with the local flora. Lobelia, Gillenia, Sassafras are only some of the thousands of plants known to have curative properties that are still in use today. Their diet was as varied as the country; it comprised of nuts, berries, crabapples, ferns, roots, mushrooms, various rhizomes, roots, rice (zizania aquatica), seaweed and corn (maize). By 1600 they had developed 150 different kinds of corn. Women and children were the actual gardeners or farmers, and either collected these food items from the wild or cultivated them near their camp. The men concentrated on growing tobacco which was used in tribal rituals and was eventually traded to the Europeans. By the 1600’s, and European contact, the indigenous peoples were also growing beans, squash and corn (the Three Sisters) sunflowers and Jerusalem artichoke.

Samuel de Chaplain was the first to bring new French settlers to Quebec in 1605. This turned out to be a false start, and so he tried again in 1617. It was then that Louis Hebert and his wife Marie Rollet came to Canada. They are considered Canada’s first gardeners. They must have felt like babes in the woods. Even I cannot fathom what it must have been like arriving in the New World which must have seemed like a never ending forest. Difficult terrain, difficult weather conditions, and nothing familiar to the eye was what laid in store for them. They faced starvation, sickness, and threats of Indian attack. Yet they succeeded. By 1626 they had cleared eight hectares and were cultivating grain fields. They had a vegetable garden and an orchard of apple trees from Normandy, France. They managed all this with only hand tools.

Throughout the 1600’s the basis of economy of the settlements was agriculture and food production. Wheat, corn and potatoes were the major crops. Other crops included onions, leeks, cabbage, melons, lettuce, peas, carrots, beets, turnips, cucumbers, thyme, marjoram and tobacco. The women of the house had a jardin potager, an enclosed garden where they grew the vegetables and fruit for the household. Anything more than the family could use would be taken to the market or village square to be sold. An ornamental garden was not even a practical thought.

By 1760 the face of early settlers was changing. New colonists were arriving from England, Germany, Scotland and Ireland. The English brought hemp with them as a crop in order to supply the British Navy with rope. The American Revolution brought 50,000 Loyalists to Ontario and the Maritimes. Mennonites moved to Canada in search of fertile land. The Mennonites called their search “the trail of the Black Walnut” and settled where they found stands of black walnut, cherry, beech and maple trees. They revolutionized Canadian farming by introducing crop rotation, the use of animal manures and lime as soil fertilizers and the planting of legumes to enrich the soil. Any semblance of ornamental gardening may have been occasionally seen as a clump of flowers in an unplanned garden.

However the early 1800’s brought stability and a measure of wealth. Merchant families would have carefully arranged flower beds and fruit trees around the house. The wealthiest built greenhouses and hired gardeners from England or Scotland. The public park emerged. All were based on the current styles from home, wherever home may have once been. By mid-19th century a new generation was born. This new generation never had to clear land, nor was it tied to old customs that did not apply to them. This generation would create botanical parks, experimental farms, railway gardens, horticultural clubs, and war gardens. The Canadian gardener was born.