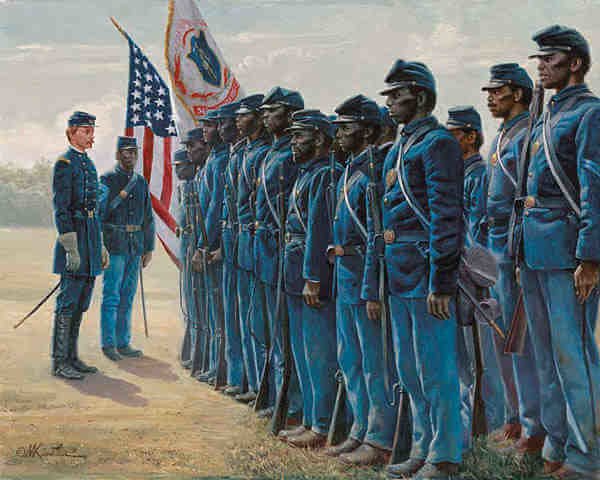 The 54th Massachusetts Infantry Regiment was the first volunteer black regiment raised in the North. The ranks were filled with former slaves and free blacks. The 54th was initially formed at Readville, Massachusetts in late February 1863 and then were mustered into service from March 30, 1863 through May 13, 1863. On May 28, 1863, their commander Colonel Robert Gould Shaw led the 54th in a triumphant parade through Boston to the docks, and then the regiment departed on the steamer De Molay for Hilton Head, South Carolina on May 28, arriving there June 3.

Initially assigned to manual labor details, the 54th did not see real action until a skirmish with Confederate troops at James Island on July 16. Two days later, Shaw and his men were among the units chosen to lead the assault on the Confederate Fort Wagner, part of the Charleston defenses. As the unit hesitated in the face of fierce Confederate fire, Shaw led his men into battle by shouting, “Forward, Fifty-Fourth, forward!” Shaw mounted the parapet, but after brutal hand-to-hand combat, he was shot through the chest three times and died almost instantly; 281 members of his soldiers (almost half of the regiment) were killed, wounded or captured.

Memorial Day of 1897 – May 31, 1897 – was designated for the dedication of the Robert Gould Shaw Memorial on Boston Common. Memorial Day, then more commonly known as ‘Decoration Day,’ was still a relatively new observance. In 1868, General John A. Logan, the commander-in-chief of the Grand Army of the Republic (the veterans organization for Union soldiers), had issued a proclamation that May 30, 1868 should be observed nationwide as Decoration Day. GAR posts across the country were encouraged to

[decorate] the graves of comrades who died in defense of their country during the late rebellion. … If other eyes grow dull, other hands slack, and other hearts cold in the solemn trust, ours shall keep it well as long as the light and warmth of life remain to us.

A group of private citizens commissioned sculptor Augustus Saint-Gaudens to create a likeness of Colonel Robert Gould Shaw. Saint-Gaudens first conceived the memorial as an equestrian statue of Colonel Shaw, like man other military monuments. Shaw’s family, however, were uncomfortable with having their 25-year-old son immortalized in a fashion typically reserved for generals, and Saint-Gaudens revised his sketch to honor both the regiment’s hero and the soldiers he commanded – a revolutionary concept at the time.

The procession in honor of the Shaw Memorial consisted of thousands from the Massachusetts Militia and the United States Army. After parading through Boston, these units formed up in front of the State House and stood at attention while Governor Roger Wolcott and other officials were escorted to the shrouded memorial by survivors of the 54th and 55th Massachusetts Infantries (the two black regiments raised in Massachusetts). As the monument was unveiled, ships in the harbor, batteries on the Common fired salvos.

Ceremonies then moved to the Boston Music Hall which was packed to capacity. Among the many addresses, the most memorable was given by Dr. William James, then 55 years old, a long-time professor of Harvard University and renowned physician, psychologist and philosopher. His brother Wilky James was an officer in Colonel Shaw’s 54th Massachusetts and participated in the charge on Fort Wagner and narrowly escaped death, suffering terrible injuries to his legs which troubled him for the remainder of his short life. He died in 1883.

Excerpt from the speech given by William James at the unveiling of the Shaw Monument:

There they march, warm-blooded champions of a better day for man. There on horseback among them, in his very habit as he lived, sits the blue-eyed child of fortune … Onward they move together, a single resolution kindled in their eyes, and animating their otherwise so different frames. The bronze that makes their memory eternal betrays the very soul and secret of those awful years. … There let the breezes of the Atlantic sigh, and its gales roar their requiem while this bronze effigy and these inscriptions keep their fame alive long after you and I and all who meet here are forgotten.