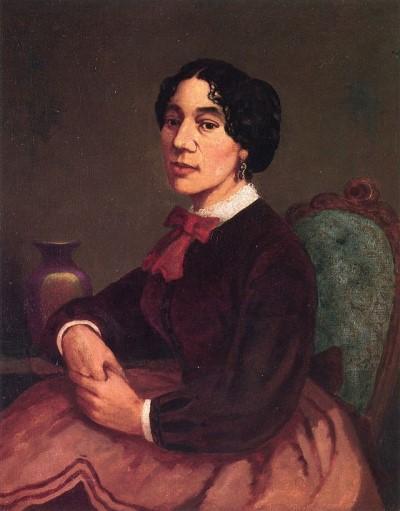 Christiana Carteaux Bannister was an African American abolitionist, philanthropist, and businessperson in New England in the mid-19th century. She met her husband, artist Edward Bannister, at her hair salon in Boston; the two were active in the Boston Underground Railroad helping runaway slaves reach the next station.

Early Years
She was born Christiana Babcock circa 1820 in North Kingstown, Rhode Island to African American and Narragansett Indian parents. Her African American grandparents most likely lived and died as slaves. Christiana’s parents were probably born after Rhode Island’s gradual emancipation act of 1784 was passed, and so gained complete freedom at the age of twenty-one. Little is known of her childhood.

By the time Christiana was eleven years old, the abolitionist movement was gaining momentum in northeastern cities. Both men and women organized antislavery groups, but their efforts would not go unchallenged. In 1831, the same year that the Underground Railroad started smuggling slaves to safety in Canada, anti-abolitionist riots erupted in Philadelphia.

Christiana’s brother Charles married a woman named Cecelia Remond of Salem, Massachusetts whose family ran several businesses, including a hair salon and a wig factory. Together with her sister Maritcha and Caroline, Cecilia Remond Babcock ran the Ladies Hair Work Salon in Salem; they also had a large wig factory there. It is likely that Christiana followed Charles to Salem and learned hairdressing and wigmaking from the Remonds.

The Remonds were also leaders in the abolitionist movement. The abolitionist lecture tour featured Charles Lenox Remond, William Lloyd Garrison, and authors William Wells Brown and Frederick Douglass. Christiana met them all through her association with the Remond family.

Career in Business
Christiana married Desiline Carteaux, a clothes dealer believed to be of Caribbean origin, in the late 1840s, but the marriage did not last. In the meantime, she opened a salon on Washington Street in Boston, the first of at least four such establishments where she catered to Boston’s elite. From 1847 to 1871 Christiana Carteaux Bannister maintained several salons in Boston.

In 1855, she opened a salon in Providence, Rhode Island while continuing to operate her Boston salon, thanks to the new mode of transportation by train. Within a few years, Bannister had started up a chain of hair salons in Boston and Providence.

Calling herself Madame Carteaux, she advertised her business in William Lloyd Garrison‘s abolitionist newspaper The Liberator, describing herself as a hair doctress who offered an array of services, including dyeing and selling “a Hair Restorative, which cannot be excelled, as it produces new hair where baldness has taken place.” The Bannister hair salons became popular meeting places for African American and white abolitionists.

Edward Mitchell Bannister
In 1853, Christiana met Edward Mitchell Bannister when he applied for work as a barber in her salon in Boston. She hired Bannister and married him on June 10, 1857. After their wedding and with Christiana’s support, Edward left his job at the salon and pursued his dream of becoming an artist. A founding member of the Providence Art Club, his paintings of landscapes and seascapes were critically and financially successful. In 1876, Bannister’s painting, Under the Oaks, won first prize at the Centennial Exposition in Philadelphia and sold for $1,500. Bannister was the first African American to win a national art award, but he had trouble collecting his prize because of his color. When he told the officials that his painting was the prize winner they apologized and treated him with more respect. The award-winning painting Under the Oaks has been lost.

I would have made out very poorly had it not been for her … my greatest successes have come through her, either through her criticisms of my pictures, or the advice she would give me in the matter of placing them in public.

Boston Underground Railroad
While living in Boston, Edward and Christiana Bannister boarded with African American abolitionists Lewis and Harriet Bell Hayden. Born enslaved in Kentucky, the Haydens escaped to Canada via the Underground Railroad. They moved to Boston in 1849 and opened a boarding house in their home. They also sheltered approximately one hundred runaway slaves; their home is the most documented of Boston’s Underground Railroad stations.

During the Civil War, Christiana Carteaux Bannister raised money for the 54th Massachusetts Regiment of black soldiers, immortalized in the film Glory. Along with Frederick Douglass, she presented the colors to the African American soldiers of the 54th Regiment in 1863. Douglass’ eldest and youngest sons, Lewis and Charles, were members of the 54th; they survived the Battle of Fort Wagner, but lost many of their comrades.

Move to Providence
In 1869, Edward and Christiana moved to Providence, where their professional careers continued to flourish. Christiana opened another salon and became a patron of the arts. She also held fundraisers to benefit widows and orphans of African American soldiers killed during the Civil War.

She also helped establish a nursing home for African American women, the Home for Aged Colored Women, which opened in 1890. She supported the facility by soliciting donations and serving as a member of the staff. The home is now known as Bannister House.

Late Years
Christiana Carteaux Bannister fell into poverty near the end of her life. Not long after her husband passed away in 1901, she was sent to live at the Home for Aged Colored Women, the facility she had helped create a decade earlier. She was reportedly suffering from dementia by this time; she was soon moved to the State Hospital for the Insane. Christiana Carteaux Bannister died at the State Hospital on December 29, 1902. She was buried next to her husband, but no marker was placed for the woman who had done so much for her community.

In 2002, Bannister finally received public recognition when a bronze sculpture bust of her was unveiled at the Rhode Island State House. The following year, she was inducted into the Rhode Island Heritage Hall of Fame.