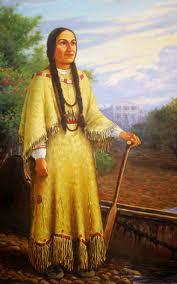 Madeline Marcotte was born in February 1780 at Mackinac Island, the daughter of a French-Canadian fur trader Jean Baptiste Marcotte and Marie Nekesh, an Ottawa Indian. Madeline was only 3 months old when her father died. She was raised among her mother’s people in an Ottawa village at the mouth of the Grand River near Grand Haven Michigan. She must have been a person of some status there, as her grandfather was Chief Kewinoquot.

At age 14, Madeline married Joseph La Framboise; they had two children: daughter Josette (1795) and son Joseph (1805). Although they considered themselves married already, Madeline and Joseph had their married by a Catholic priest on Mackinac Island on July 11, 1804. Josette was baptised in 1799 at St. Anne’s Church of Mackinac and was the first entry in the church’s register.

Business Career
Madeline La Framboise was a great asset to her husband Joseph in the fur trade. She knew the business and assisted him in negotiations. She and her husband owned many trading posts in western Michigan. Every fall they traveled from Mackinac Island with their merchandise to trade with the Ottawa living along the Grand River. Every spring they returned to Mackinac Island with their harvest of furs.

Madame La Framboise would have made her mark in any age, but to have done so in the period between 1780-1840 was a truly remarkable achievement. She was after all a woman and not just a woman, but also a Meti, a French-Indian woman. Living at the outpost of civilization on Mackinac Island, she became successful in one of the most difficult and dangerous occupations, that of a fur trader.

In 1806, her husband was killed by an Indian while they were at their trading post near where Lowell is today. At this point Madeline gathered up her furs and took her husband’s body to Mackinac Island. Thereafter she assumed full responsibility for the fur trading business and continued to manage several trading posts.

For the next 12 years, Madame LaFramboise, as she was known, wintered in the Grand River Valley collecting furs from trappers and then in the late spring she supervised the transportation of the furs to Mackinac Island. She owned a string of trading posts in the Valley, and expanded her business throughout the western and northern portions of Michigan’s lower peninsula, while raising her two children on her own.

At a time when an experienced fur trader earned about $1000 per year (which was a large sum at the time), La Framboise was earning $5000 to $10,000 per year. She was able to provide a Montreal education for her children, Josette and Joseph.

Soon she was confronted with a serious new challenge when John Jacob Astor’s American Fur Company became a competitor in the fur trade. For years she remained successful in competing with Astor’s powerful monopoly, and was acknowledged by the fur trade society, agents as well as Indians, as an intelligent worker in the trade who was always fair in her dealings.

In 1816, her accomplished and educated daughter, Josette married Benjamin Pierce, commandant of the fort and brother of Franklin Pierce, future president of the United States. Josette bore Benjamin two children: Josette Harriet and Benjamin. Only four years after their marriage, Josette and her infant son died. Benjamin left Harriet on Mackinac Island in the care of her grandmother.

Madame La Framboise spoke four languages fluently: French, English, Ottawa and Chippewa; but she could not read or write in any language. After the death of her beloved daughter and grandson, she taught herself to read and write French and English, and her home was at times a school.

She was so successful that John Jacob Astor decided to quit competing with her. In 1818 she was convinced to merge with or sell out to (accounts differ) John Jacob Astor’s American Fur Company to her financial advantage. She amassed a great fortune and was able to live in great comfort for the rest of her life.

In 1822 La Framboise, then 41 years old, decided to retire on the stunning shoreline of Mackinac Island, where she built a very fine home. There she entertained dignitaries, military officers as well as many of her native American friends and family members. She never forgot her heritage, often wearing her Indian headdress to public events.

Her dedication to education secured for her a prominent place in Mackinac society. Now able not only to speak, but also to write in four languages, she became a resource person for American and European travelers and officials who came through Mackinac. It was noted by many of them that she had a very clear sense of her own identity and importance.

La Framboise was also a philanthropist and her good deeds have had a lasting impact on Mackinac Island. She was very active at St. Anne’s Catholic Church and the parish register lists her as godmother for many baptisms and witness at many marriages. She was also a Sunday school teacher there.

When church leaders decided to move the church from its original location in 1827, La Framboise donated a large portion of her property next to her home as the new site. St. Anne’s Church still stands there today. In exchange for her gift of land, La Framboise asked to be buried beneath the altar of St. Anne’s at the end of her life.

Madeline La Framboise died April 4, 1846, and she was buried beneath the altar at St. Anne’s Church on Mackinac Island. During the last half of the 20th century, her tomb was moved from beneath the church to a garden on the grounds to make way for renovations. Her lovely home has been expanded and is now a hotel for Island visitors.

Her son, Joseph La Framboise, became a fur trader and lived most of his life along the Minnesota River Valley. In 1827 he married Magdeleine Sleepy Eyes Sisseton, a member of the Sioux tribe. They had one son, Francis La Framboise. Joseph died November 9, 1856, in Nicollet County, Minnesota.