Heroine of the Battle of Guilford Court House

Historians are undecided about the exact birth date of Kerenhappuch Norman, but it is assumed that she was born in Spotsylvania County, Virginia, in about 1715. She was the daughter of a well known tobacco planter, Isaac Norman, Jr. and his wife, the former Frances Courtney.

Kerenhappuch Norman married James Turner, the son of a prominent family and also a tobacco planter, in Spotsylvania County in 1733. Deed records show that following the wedding, Isaac Norman gave 50 pounds and 100 acres of his home plantation to his daughter and her new husband.

It was on this land that the first child, a son James Jr. was born in 1732, and he was followed by four daughters – Sarah, Mary, Elizabeth and Susan. The land lay on the banks of the Rappahannock River near the present day town of Remington, and there the two James Turners prospered as tobacco farmers for many years.

The Norman and Turner land became a part of Culpeper County in 1749. The new county was surveyed by George Washington, and it was probably during this time that Kerenhappuch and her family met and became devoted to the man who was to become the father of our country.

These were happy years for James and Kerenhappuch; they raised their children and taught them the skills of riding and hunting; skills which were not just enjoyable but necessary for survival in this frontier land.

In 1765 Kerenhappuch and James sold their home and land and moved to Halifax County, Virginia. James Turner Sr. died there in 1773, and Kerenhappuch was still living there at the time of the Revolutionary War.

During the Revolutionary War, the Turners were ardent Patriots. James Jr. joined the Virginia Militia where he was a Captain. A skilled rider, Kerenhappuch would on occasion carry dispatches for the army, occasionally even through the lines of the unsuspecting British. Kerenhappuch told her son and grandsons that if they were ever wounded, they should get word to her and she would come to their assistance.

Battle of Guilford Court House
Captain Turner’s company went south and in March of 1781 the company was posted to guard duties in Guilford County, North Carolina. Guilford Court House was the seat of government for the county and it was toward this site that the 1900-man army of British Lord Charles Cornwallis was marching on March 15, 1781.

Unbeknownst to Cornwallis, a 4400-man army of colonial troops under Major General Nathanael Greene was lying in wait, well hidden in the dense forest foliage.

The ensuing battle was fierce; when it was over more than 27% of the British had suffered injury or death, compared to only 6% for the Americans who claimed victory in the battle. Although neither side gained a decisive advantage, the British loss of troops was so great that it forced them to abandon the Carolinas, and this eventually led to their surrender at Yorktown on October 19, 1781. 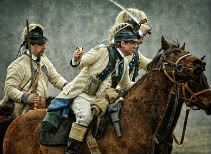 On March 15, 2010, more than 400 Revolutionary War reenactors came from all over the country to participate in the recreation of the battle at the Guilford Court House National Military Park.

Eight members of Kerenhappuch Norman Turner’s family fought in the battle – her son and seven grandsons – and her son received very serious wounds. When word of this reached her, she rode on horseback to the battlefield from her home in Virginia.

Placing her son James Jr. in a log cabin on the battlefield in a crude bed on the floor, Kerenhappuch secured tubs in which she bored holes. These tubs she suspended from the rafters and filled them with cool water from the ‘Bloody Run’ which flows nearby. The constant dripping of water on the ghastly wounds lowered his fever and saved her son’s life. She also nursed other soldiers who were wounded during the battle.

After the war, Kerenhappuch Turner moved with her son James and daughter Sarah Turner Smith to Richmond County, North Carolina, where they lived on the Little River.

In her old age, Kerenhappuch still rode horseback and hunted with her grandsons, and during one of those hunts, she was thrown from her horse and suffered a broken neck.

A monument was erected in her honor at the Guilford Court House National Military Park and was dedicated on July 4, 1902. Its granite base is crowned with the bronze figure of a woman clad in the costume of her time carrying in her hand the symbol of her ministry on the battlefield, a folded towel over her arm and a tea cup and saucer in her hand. It is believed that this was the first monument ever erected to a Revolutionary War heroine.

Excerpt of the address at the unveiling of the Kerenhappuch Turner monument at the Guilford Court House Military Park on July 4, 1902:

It is for me to tell you something of the brave woman in honor of whose memory we today unveil on this sacred spot the first monument ever erected on American soil to a Revolutionary heroine – its granite crowned with a handsome statue, and emblazoned with words of everlasting bronze. In song and in story – ‘in thoughts that breathe and in words that burn’ – have been told again and again the story of the virtues, the brave deeds, the sacrifice, the suffering, and the heroism of the men who fought, bled, and died in that terrible war for Independence; but the story of the privation, the suffering, the daring, and the dying of the grand reserve army of that war is yet untold and unsung.

The women, by their lonely hearthstones, surrounded by helpless children, in the primeval forests, without mail or telegraph or railroad to bring them tidings of the absent loved ones their griefs, their sorrow, their suspense, their anxiety, their agony their death borne without a murmur. They died not in the exciting and exulting rush of battle. Theirs was the long slow, wasting, lingering death – a thousand deaths. Sometimes it was cold-blooded murder; sometimes it was the cold, piercing, cutting dagger of helpless grief; and sometimes they fell under the crushing burden of domestic care and trouble.

Their battles were fought in the darkness and loneliness and silence of their homes. They heard not the martial music which thrilled heroes; they felt not the elbow touch which heroes feel in the mad rush of battle. There was never a shout or cheer to give them courage and strength. There were no medals awarded to them; no promotions were bestowed to stimulate them. Theirs was a lonely march to death – and yet how bravely and how patiently they fought to the end no tongue or pen can ever tell.

These were heroines – and whilst in village, hamlet, town, and city, from ocean to ocean, we have with stone and brass built memorials of every name, size, and kind in honor of our heroes – the mothers, the wives, and the daughters of that awful time, who toiled and suffered and died for their country, are ‘unwept, unhonored, and unsung.’

Not only did they suffer and fight and toil thus in their lonely and desolate homes, but these ministers of compassion, these angels of pity, whenever possible, went to the battlefields to moisten the parched tongues, to bind the ghastly wounds, and to soothe the parting agonies alike of friend and foe, and to catch the last whispered messages of love from dying lips…

The final battle scene at the end of the 2000 historical epic The Patriot drew its inspiration from two specific battles from the American Revolution: Cowpens and Guilford Court House. The scene where Cornwallis orders his artillery to “concentrate on the center,” killing both Continentals and his own troops, actually took place at Guilford Court House.