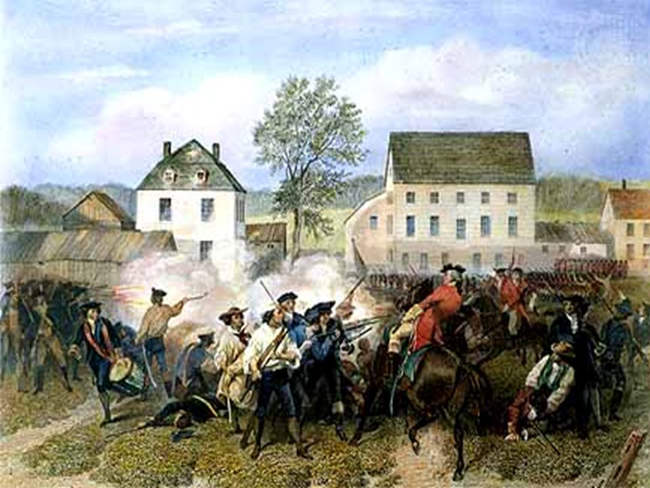 Image: Battle of Lexington
First battle of the Revolutionary War

Prudence Cummings was born November 26, 1740, at Dunstable, Massachusetts, the daughter of Samuel and Prudence Lawrence Cummings. She was raised in a household that freely discussed politics, and not all shared the same opinions. Prudence married David Wright of Pepperell, Massachusetts, on December 28, 1761 and settled in Pepperell. For the next fourteen years, Prudence helped her husband, cared for her children, and was a leader among the young matrons of the town.

Patriots and Tories
There were two parties in the colonies: Whigs and Tories. The Whigs (Patriots) were in sympathy with democratic ideals and insisted upon representation for the colonies. The Tories included those whose sympathies were with the king, the clergy of the established church and others associated with the English government. Some supported the king simply because he was king, while disapproving of his methods.

The town of Pepperell was loyal to the democratic ideals of the Patriots. There was not a Tory within its borders, more than could be said of most towns. When the women of Pepperell heard of the Boston Tea Party in December 1773, they burned their tea in front of the meetinghouse.

In the spring of 1775, David Wright was in the prime of life, forty years old. Prudence was thirty-five, and they had seven children. All of Pepperell’s able-bodied men were enrolled in the militia and ready to respond to the first call. The women were no less ready, the anxious heart of the wife and mother knew what it would mean if fathers and husbands left the homes and farms.

Revolution!
In the American Revolution, the Massachusetts Bay Colony was considered by the British government to be the most rebellious of the thirteen colonies. It was unique in having Minutemen that were part of a network of committees, signals, messengers and volunteer soldiers that the Massachusetts towns used to communicate with each other after the British occupied Boston and closed town meetings.

When the time came, Patriot women would meet the crisis with a selflessness that matched the heroism of the men. Women molded bullets and tied cartridges around them; they filled powder horns; they sent their men off to fight; and faced many new duties at home. It must have been difficult for Prudence Wright to realize that two of her brothers were Tories.

When word came that the Redcoats were coming, towns near Boston were arming to meet them. About 9 o’clock on the morning of April 19, 1775, a messenger arrived in Pepperell with news of the fighting at Lexington and the advance of the Redcoats toward Concord. The colonel of the local militia rode out, leaving orders for the Pepperell men to meet him at Groton.

The men quickly bid their wives and children goodbye, and were gone. So well prepared were the Pepperell Minutemen that they arrived at Groton, five miles away, before the company there was ready to march. The women knew that their townsmen had helped chase the British, and were now with other Minutemen near Boston, and that more serious action was imminent.

The Prudence Wright Guard
Prudence Cummings Wright was a Patriot inside and out. While visiting her mother in Hollis, Prudence had overheard Samuel and Leonard Whiting making plans to pass messages between the British to the north and those in Boston. The direct road from the north to Boston ran through the town of Pepperell.

In a short time, Prudence was back in Pepperell sending an alert out to other women. She had decided to stop the Tories if at all possible. Word was sent from house to house for the women to meet at Jewett’s Bridge over the Nashua River – between the towns of Pepperell and Groton – where a person coming from the north would have to cross. they were the women of this immediate neighborhood, between thirty and forty in number.

With the conflicting rumors rife in April, 1775, it is difficult to appreciate the uncertainty that would result from the chance reports of horsemen who gathered their information as they rode. It was this uncertainty that led the women to disguise themselves as men, wearing the clothing of their absent husbands and brothers. Their weapons were old muskets, pitchforks and tools – anything that could be used as a weapon.

The women elected Prudence Wright as commander of their company of Minutewomen. Prudence, a 35-year-old mother of six, chose Sarah Hartwell Shattuck of Groton as her lieutenant. Elizabeth Hobart was only a girl of seventeen at that time. Prudence hoped that if a large body of Redcoats appeared, the women would be able to scare them off before it was discovered that they were women.

This company of women came to be known as the Prudence Wright Guard. They guarded the bridge and patrolled the road, determined that no enemy should pass that way. There were pine trees on one side of the river near the bridge, but no houses very near. The road curved around high land on the north side, so the bridge was not visible to a person coming from the north until it was nearly reached.

The Minutewomen waited at the bridge into the night, shielding their lantern, remaining totally silent so as not to give their presence away. At last, two horsemen approached the bridge from the north. Taking advantage of the element of surprise, Prudence burst upon them with her lantern shining brightly in their faces, demanding to know their identity and business.

The men tried to flee on horseback, but the women surrounded them and seized the reins of their horses. Captain Leonard Whiting, a known Tory, drew his revolver and was about to use it when the other rider, Prudence’s brother Samuel Cummings, made him lower it, saying: “I recognize Pru’s voice, and she would wade through blood for the rebel cause.”

The men were dismounted and searched, and dispatches from the British forces in the field to the British General in Boston were found on them. The women marched their prisoners to the house of Solomon Rogers in the neighborhood, and there they were detained, securely guarded by the women overnight.

In the morning, the prisoners were marched to Groton and delivered into custody of the Committee of Safety. The papers found on the men were sent to Charlestown. The next day, the two men were given their liberty on condition that they would leave the colony. They departed in the direction of New York, and Samuel Cummings never returned. Samuel was Prudence’s favorite brother, and his loss was a life-long grief to her.

A Granite Tablet Near Jewett’s Bridge bears the following inscription:

Near this spot a party of patriotic women, under the leadership of Mrs. David Wright, of Pepperell, in April, 1775, captured Leonard Whiting, a Tory who was carrying treasonable dispatches to the enemy at Boston. He was taken prisoner to Groton, and the dispatches were sent to the Committee of Safety at Cambridge.

The Guards’ husbands returned from the fighting at Lexington and Concord, and repeated the words of Captain Parker on Lexington Green: “Don’t fire unless you are fired on; but if they want war, let it begin here!” The women told how they had guarded the bridge. After doing some work at home, the men returned to camp, and those too old to shoulder muskets counseled the boys, and put their own strength into the care of their sons’ families.

In March, 1776, four men – Leonard and Benjamin Whiting, Thomas and Samuel Cummings – were summoned to appear before the Committee of Safety of the towns of Hollis, Dunstable, Merrimack and Litchfield. On their petition, the case was transferred to the General Court then sitting in Exeter. The accused appeared by their counsel. The complaint was not sustained and they were discharged.

Events, however, soon proved the charges to have been well grounded. In June, Thomas Cummings was indicted before the Supreme Court, and gave bail for his appearance in September. In the meantime, he left his family, a wife and three children under five years of age, and his country and never returned.

Leonard Whiting was put in jail at Amherst on a charge of “being inimical to the Rights and Liberties of the United Colonies.” He took no active part in the war after the Declaration of Independence. It was judged that his treason came from a soldier’s loyalty to the government whose commissioned officer he was. He went to Cavendish, Vermont, where he spent the remainder of his life as a respected and influential citizen.

David and Prudence Wright had eleven children in all. David, the oldest, was in the Revolutionary army near the close of the war. Some of the closing years of their lives they spent in Groton in the home of Samuel Hartwell, who had married their daughter.

According to church records they spent their last days in Pepperell. This entry of their deaths appears in the records:

This is a testament to the courage of these women – their husbands and brothers far away, their children asleep at home – who stood alone on the bridge in the silence and darkness, awaiting they knew not what.

SOURCE
Who Were the Minutemen and Minutewomen?