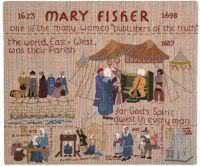 Image: Panel B2 of the Quaker Tapestry, which was devoted to Mary Fisher

Quaker Beginnings
In the 17th century, the Quakers – also known as the Society of Friends – were a form of Protestant Christianity that was started by George Fox in England in 1652. According to tradition, Fox was standing on Pendle Hill in northwest England when he received a vision from God directing him that instead of simply obeying doctrines and rules, he should focus on the Inner Light—the ability of every person to directly receive God’s love.

George Fox believed there was no need for ordained ministers and traditional forms of worship, and began to preach this new form of Christianity throughout England. He also added the ideas of pacifism and the rejection of sworn oaths, which, of course, was not to the liking of political authorities. Officials hounded his followers and jailed them for their refusal to take oaths and for not supporting the Church of England.

Quaker Women
The Quakers were controversial for a number of reasons. One of the major ones was the belief that ministry came through women as well as men. A number of Friends, male and female, traveled through Great Britain, Jamaica, British colonies in North America, trying to attract followers to their religion. Quakers were known to have women leading prayer meetings and functioning as Church administrators.

Sometime in the early 1650s, Mary Fisher was convinced by the preaching of George Fox to join the Friends. She soon began preaching herself, which got her into trouble with the authorities. She had several strikes against her in the minds of the civil and religious leaders—she was still quite young, a female, and uneducated.

The men and women who carried the Quaker message abroad became known as the Valiant Sixty. They were the most ordinary of people: farmers, tradesmen, and shopkeepers. Yet something extraordinary propelled them into action.

The story of one Friend, Mary Fisher, exemplifies the unflinching spirit of the Valiant Sixty. Her first missionary journeys were across England. When she arrived in York, she was thrown into prison. In Cambridge, she was the victim of mob violence and then publically flogged.

The New World
In 1655, Mary and another Quaker, Ann Austin, believed that God had called them to go to the Americas to spread their beliefs. First they went to Barbados, then to Massachusetts, where they met with hostility from the Puritan leaders.

To the Puritans of Massachusetts Bay Colony, Quaker teachings were not just heretical but a direct threat to the authority of the magistrates who governed the colony. In their eyes, this contempt of the magistracy made Quakers instruments of the devil. The authorities took immediate steps to suppress Quakerism.

Puritan Intolerance
Mary Fisher and Ann Austin were confined to the ship while their baggage was searched and their books confiscated. Then they were taken to jail, stripped, and searched for signs of witchcraft.

Their books were burned, they were stripped and searched for signs of witchcraft, and then they were imprisoned. It was only through the bribing of the jailer by a compassionate townsman that they were fed.

During their imprisonment, no one was allowed to visit or to speak with them, and a board was nailed up before the window so that none might see them. They were denied all writing material, and no lights were permitted at night. They were so starved that Nicholas Upsall, a Puritan church-member, bribed the jailer with five shillings a week to allow him to bring food to them.

The Boston Council was convened, and a declaration issued, wherein it was said that:

There are several laws long since made and published in this jurisdiction bearing testimony against heretics and erroneous persons, [and that Ann Austin and Mary Fisher] upon examination are found not only to be transgressors of the former laws, but to hold very dangerous, heretical, and blasphemous opinions; and they do also acknowledge that they came here purposely to propagate their said errors and heresies, bringing with them and spreading here sundry books, wherein are contained most corrupt, heretical, and blasphemous doctrines contrary to the truth of the gospel here professed amongst us.

After five weeks in prison, they were returned to the ship, and the captain was forced to carry them back to Barbados. Eventually they returned to England.

In 1657, at the age of 35, Mary set off for the Mediterranean with a group of other Quakers. They visited the Ionian island of Zante and the coastal city of Smyrna. They were forced out of Turkey in 1659 after the English representative there thought that their activities were bringing England into disrepute.

Mary finally returned to England in 1659, and in 1662 married the prominent Dorset Quaker, William Bayly. In that same year she was arrested and roughly treated in London despite being pregnant.

Bayly lost his life at sea in 1675 and in 1678 Fisher married John Cross, a London Quaker. They emigrated to America where Cross died in 1687. Fisher herself passed away in Charlestown, South Carolina in 1698. She left a rich Quaker legacy in the form of her granddaughter Sophia Hume, who became a prominent minister and writer.