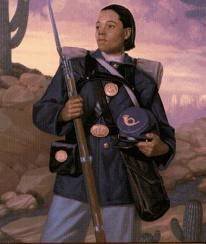 Buffalo Soldier in the American West

Cathay Williams is the first African American female to enlist, and the only documented to serve in the United States Army, posing as a man under the pseudonym William Cathay. Orders were soon given to transfer the new recruits to the west, where they would join the army’s fight against the Indians. Cathay and her fellow black comrades were named Buffalo Soldiers by the Plains Indians because they were fierce fighters, and they had short curly hair like the buffalo.

Cathay Williams’ story is as unique as they come. She was born a slave near Independence, Missouri, in 1842. Her father was free, but her mother was a slave. She served as a house girl for a wealthy planter until his death.

Shortly thereafter, the Civil War began and she was liberated by the 13th Union Army Corps. They took her along with them to Little Rock, Arkansas, where she learned to cook for the troops. She spent the remainder of the war as a paid servant of the Union Army. While she served in this capacity, she experienced military life first hand. She witnessed battles all over the South: Georgia, Louisiana and Virginia.

Because she was such a good cook and was so dependable, she was sent to Washington to serve as cook and laundress for General Philip Sheridan and his staff. She traveled with them and witnessed Sheridan’s raids in the Shenandoah Valley.

Prior to the Civil War, the United States Army had been fighting the Indians in the West, but men and resources had to be transferred back east to fight the War Between the States. More than 180,000 black soldiers participated in that conflict.

The Union Army had seen the value of black soldiers in the military and thought they should have the opportunity to join the peacetime army. In July 1866, Congress passed a law authorizing the formation of six all-black army units.

Cathay’s main objective after the war was to remain independent and self-sufficient. She was accustomed to military life. The army provided shelter, education and medical care, and she saw it as far superior to the uncertainties of civilian life as a liberated slave.

Cathay disguised herself as a man and changed her name to William Cathay, and became the first African American female to serve in the United States Army. She told the recruiting officer that she was a 24-year-old cook. The recruiter described her as 5′ 9″ tall with black eyes, black hair and black complexion. Fortunately, no medical examination was required.

Cathay was assigned to the 38th U.S. Infantry, and she learned to perform all the soldierly duties. She could shoot, march and stand guard with the best of them. Orders were soon given to transfer the new recruits to the west, where they would join the army’s fight against the Indians. They were sent to protect pioneers traveling through one of the most dangerous routes to California, called Cooke’s Canyon.

Shortly after her enlistment, she contracted small pox and was hospitalized. After her recovery, she rejoined her unit stationed at Fort Cummings, New Mexico. During her service, she was hospitalized at least five times, but no one discovered she was a female.

Cathay and her fellow black comrades were named Buffalo Soldiers by the Plains Indians because they were fierce fighters, and they had short curly hair like the buffalo. It was a name of honor and respect.

After less than two years of service, Cathay was given a disability discharge, but I could not discover why. Some researchers say she was ill, others say she was tired of serving in the military. Whatever the reason, she was honorably discharged at Fort Bayard, New Mexico, in October 1868, after making her place in history as the first – and only – female Buffalo Soldier.

Some say she revealed her gender before she was discharged. Others say no one knew she was a woman until 1891 when she applied to the army for a pension, at the age of 49. Her application was denied. I can only assume that it was refused because women were not allowed to serve in the army – and would not be allowed to until 1948.

Years later, a reporter asked Cathay why she had joined the army. She said, “I wanted to make my own living and not be dependent on relations or friends.” She stayed in New Mexico after her discharge. Still determined to make her own way, she opened a boardinghouse. She died there in 1924 at the age of 82.

I am in awe of these women who pushed the boundaries of the place society had made for them, who created a path where footsteps had never trod, who found the courage to go where no woman had gone before.