Nursing was not a woman’s job before the Civil War, but by 1865, there were over 3,000 nurses serving the Union and Confederacy. In the North, most women nurses worked in military hospitals.

Image: Black nurses with the 13th Massachusetts Infantry
The 13th Mass fought in numerous battles, from the Shenandoah Valley to Bull Run to Antietam

So many women volunteered as Union nurses that the U.S. government hired Dorothea Dix to serve as the superintendent of women nurses. African American nurses were not included in those numbers, nor were they recognized for their service for decades to come. Some were paid; many volunteered.

Ann Bradford Stokes
Ann Bradford Stokes is the best known of the African American women who served as nurses on the hospital ship USS Red Rover, the first Union Naval hospital ship. She was enlisted in the Navy in January 1863 and served until October 1864, during which time she was paid regular wages. Stokes became the first African American woman to serve on board a U.S. military vessel, and she was among the first women to serve as a nurse in the Navy.

The USS Red Rover, a converted former Confederate paddle wheel steamer, was the first U.S. Navy hospital ship, and nearly 3000 patients were treated on board during the Civil War. Ann worked under the direction of the Sisters of the Holy Cross nuns aboard the USS Red Rover. After leaving the Navy, Ann married Gilbert Stokes.

In 1890 Ann Bradford Stokes applied for a disability pension for her service during the Civil War and was certified by the Navy as having served on active duty for eighteen months. She was awarded a pension that same year and is the first woman in the United States to receive a pension for her own military service. Stokes died in Illinois in 1903.

Harriet Tubman
Born into slavery, in eastern Maryland, Harriet Tubman received a severe head wound by an overseer when she was fifteen. From this injury she suffered disabling epileptic-type seizures, headaches, and powerful visionary experiences throughout her life. As a young woman, Tubman escaped from slavery in eastern Maryland with the help of conductors on the Underground Railroad.

Tubman then bravely returned to the South nineteen times and escorted more than three hundred slaves to freedom, becoming the most famous Underground Railroad conductor of all. She expressed her philosophy:

There was one of two things I had a right to, liberty or death; if I could not have one, I would have the other; for no man should take me alive….”

During the Civil War, Tubman served in numerous military hospitals. In 1865 she was appointed matron of the Colored Hospital at Fort Monroe in Virginia in 1865, and began caring for sick and wounded black soldiers there. Tubman worked tirelessly, trying to heal the sick. Many in the hospital were dying from dysentery, a disease associated with fever, severe abdominal pain and terrible diarrhea.

Tubman remembered home remedies from her childhood, and she was sure she could help these men if she could find some of the same roots and herbs that grew in Maryland. One night she searched the woods until she found water lilies and crane’s bill (geranium). She boiled the water lily roots and the herbs and made a bitter-tasting brew that she gave to a man who was dying, and he slowly recovered.

Living past ninety, Harriet Tubman continued to serve mankind in numerous capacities throughout her long life. In 1896, she took up the suffragist cause and was a delegate to the National Association of Colored Women’s first annual convention, believing that the right to vote was vital to preserving their freedom. In 1944, Eleanor Roosevelt christened the Liberty Ship Harriet Tubman.

Sojourner Truth
Isabella Baumfree, better known by her self-given name Sojourner Truth, was born into slavery in Ulster County, New York in 1797. Although she would later gain fame as an abolitionist and women’s rights activist, Truth was originally a nurse who served a family named the Dumonts. She was promised her freedom a year before the 1827 Emancipation Act, but when her owner changed his mind, she fled with her young daughter Sophia in 1826. 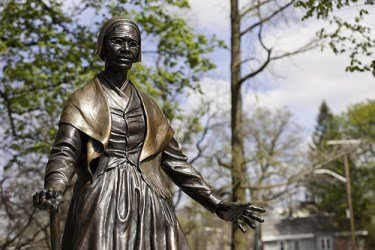 During the Civil War, Sojourner Truth walked the roads of Michigan, where she had settled, collecting food and clothing for black regiments. Moving to Washington, DC in 1863, she worked in Union hospitals nursing the sick and wounded and teaching domestic skills to freed slaves, and immersed herself in relief work for the freed people. During this time, Truth also protested and brought about congressional action in banning segregation on streetcars in Washington, DC.

With the passage in 1867 of the Fourteenth Amendment giving black men the vote, white suffragists were outraged at the lack of reference to women, and most black activists believed that the suffering of black male slaves entitled them to receive the vote first. Again, Truth was the only voice for black women, and for recognizing the link between racism and sexism:

There is a great deal of stir about colored men getting their rights but not a word about the colored women’s theirs, you see, the colored man will be masters over the women, and it will be just as bad as it was before. So I am for keeping the thing going while things are stirring, because if we wait ’till it is still, it will take a great while to get it going again.

Susie King Taylor
A slave raised on an island off the coast of Georgia, Susie King Taylor became famous for her volunteer service during the Civil War. In April 1861, General David Hunter assaulted Fort Pulaski and freed all of the slaves in the area, including Susie. As a young slave girl, Susie had been secretly taught to read and write, and those abilities proved invaluable to the Union Army as they began to form regiments of African American soldiers. 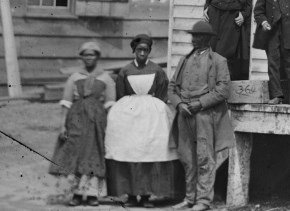 King’s experiences as a black employee of the Union Army are recounted in her diary. She describes numerous battles and intersperses these accounts with personal stories and commentary on life in the South, and the unequal treatment of the African American soldiers:

The first colored troops did not receive any pay for 18 months and the men had to depend wholly on what they received from the commissary… their wives were obliged to support themselves and their children by washing for the officers and making cakes and pies which they sold to the boys in the camp. Finally in 1863, the government decided to give them half pay, but the men would accept none of this. They preferred rather to give their services to the state, which they did until 1864, when the government granted them full pay, with all back due pay.

Though she was never paid for her service, King wrote:

I was very happy to know my efforts were successful in camp, and also felt grateful for the appreciation of my service. I gave my services willingly for four years and three months without receiving a dollar. I was glad, however, to be allowed to go with the regiment to care for the sick and afflicted comrades.

Following the Civil War, King established a school for freed slaves. When her husband Sergeant Edward King of the First South Carolina Volunteers died in 1866, she collected a widow’s pension. She then settled in Savannah, Georgia with her husband, who was killed in an accident shortly before the birth of their son. Taylor spent much of the remainder of her life in the North, serving as a teacher, domestic servant and cook. In 1879, Taylor married Russell L. Taylor; he died in 1901.

Susie King Taylor’s memoirs, Reminiscences of My Life in Camp with the 33rd United States Colored Troops Late 1st S.C. Volunteers (1902), is the only known published recollection of the experiences of an African American nurse during the Civil War. Despite her work during the Civil War and her subsequent dedication to political and social reform, Taylor died in relative obscurity in 1912. In the South, many upper class women refused to lower themselves by working in hospitals, but they did open up their homes to wounded soldiers and nursed them there. A few put aside their distaste for hospitals and went to work. Lower class women, both black and white, were not so fortunate. They spent hours, weeks, months and even years nursing patients, cleaning and preparing food in southern hospitals.