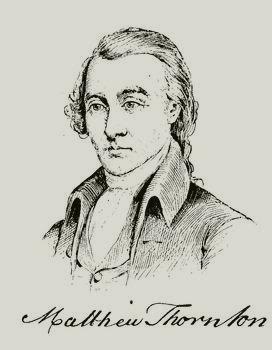 Hannah Jack was born in 1742, daughter of Andrew and Mary Morrison Jack of Chester, New Hampshire. Her family had emigrated from Londonderry, Ireland, but they were originally Scottish. Matthew Thornton was born in 1714 in Northern Ireland, and was brought to this country at the age of three years by his parents, James and Elizabeth Jenkins Thornton. Their family is said to have been among the 120 families who in five small ships, arrived in Boston, Massachusetts, on August 17, 1718, and in the fall of that year went to Maine. When their ship landed in Maine in mid-winter, the passengers had no place to live, so they remained aboard ship.

The Thornton family settled first outside Brunswick, Maine, on a plot of land overlooking Maquoit Bay. In 1720, Brunswick was an outpost on the frontline that stood between the aspirations and momentum of three major cultures, each of which was seeking its own territory. This triangle of struggle consisted of:
The English in Boston and Falmouth to the West
The Native American peoples to the North and in the interior
The French of Acadia, Nova Scotia and the St. Lawrence to the East

In a way this juxtaposition was prophetic – for Matthew Thornton’s private and public life was to interface, at different times, with the struggles of all three contenders. The first such encounter was to occur five years later; on July 11, 1722, a band of Native Americans attacked the town. James, Elizabeth, and Matthew fled from their burning home and escaped by canoe. Narrowly escaping death, they made their way initially to Casco Bay, Maine.

From there, they moved to the Scots-Irish settlement of Worcester, Massachusetts, which was a center of Scots-Irish settlement in New England. There, young Matthew grew up and received a classical education at the Worcester Academy, and became a doctor through the time-honored tradition of studying with an established physician.

In 1740, he moved to Londonderry, New Hampshire – another Scots-Irish settlement – where he opened a medical practice. The Scots-Irish Presbyterians of Worcester had been badly treated by the Massachusetts Congregationalists, and partly for that reason, Thornton and others of his nationality decided to live in Londonderry.

Skilled as a physician, well educated, and from the same European stock as most of the townspeople, Dr. Thornton soon became a leading member of the community. His success as a physician allowed him to purchase significant land holdings in Londonderry. He soon made a name for himself in civil matters, too, serving in a variety of town and provincial offices, as both a legislator and a judge. He received from Governor Benning Wentworth commissions as a colonel in the Londonderry militia and as Justice of the Peace.

In 1745, Matthew Thornton was still a bachelor and decided to volunteer his services as a military surgeon to the New Hampshire troops on the Fort Louisburg Expedition to Cape Breton, Canada. This was a major British campaign against the French, and ended with the taking of the French fort at the mouth of the St. Lawrence waterway. Although the army suffered greatly in capturing Fort Louisburg, Thornton’s skill as a surgeon held his regiment’s losses to only six men.

Thornton returned home to Londonderry, where he again practiced medicine and remained in the local militia. In the 1750s, he was described as tall, clear-eyed, and handsome, and charming, with storytelling ability that kept his friends enthralled for hours.

When Hannah Jack married Dr. Matthew Thornton in 1760, she was eighteen years old and he was 46. A story told in the History of New Boston NH states, “she was a beautiful young girl of eighteen, whom he has promised, when a child, to wait for and marry, as a reward to her taking some disagreeable medicine.” Over the next fourteen years, five children were born to Dr. and Mrs. Thornton, four of whom grew to maturity: James, born in 1763, Andrew in 1766, Mary in 1768, Matthew in 1770, and Hannah in 1774.

In 1762, Dr. Thornton established a farm in New Boston, NH, remaining there eight years, then returning to Londonderry. In 1768, he and other members of his family were granted the township which still bears his name, Thornton, and he had interests in other towns as well. 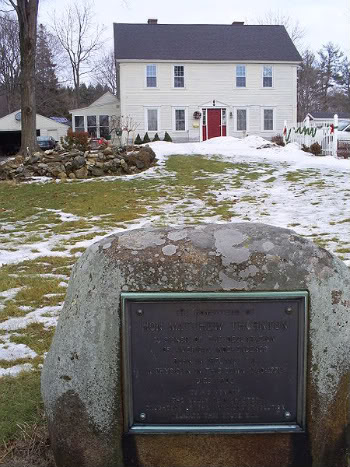 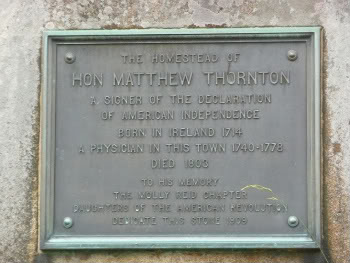 Close-up of Plaque
Londonderry, New Hampshire
From about 1740 to 1779, this two story saltbox-style frame house belonged to Matthew Thornton, physician, politician, and jurist. Declared a National Historic Landmark in 1971.

Dr. Thornton, at the age of 61, was too old to fight in the Revolutionary War (although he held the rank of colonel until 1779), but he readily served in the various provincial congresses. In early 1775, he was elected to the New Hampshire Provincial Congress at Exeter, where after a speech denouncing England’s policies towards America, he won election as the body’s President on May 17, 1775.

As President of the Provincial Congress, Dr. Thornton addressed the following letter to the inhabitants of the Colony of New Hampshire:
Exeter, June 2, 1775

To the Inhabitants of the Colony of New Hampshire :
Friends and brethren, you must all be sensible that the affairs of America have, at length, come to a very affecting and alarming crisis. The horrors and distresses of a civil war, which, till of late, we only had in contemplation, we now find ourselves obliged to realize. Painful beyond expression, have been those scenes of blood and devastation which the barbarous cruelty of British troops have placed before our eyes. Duty to God, to ourselves, to posterity, ends forced by the cries of slaughtered innocents, have urged us to take up arms in our own defence.

Such a day as this was never before known, either to us or to our fathers. You will give us leave, therefore, in whom you have reposed special confidence, as your representative body, to suggest a few things, which call for the serious attention of everyone who has the true interest of America at heart. We would, therefore, recommend to the colony at large, to cultivate that Christian union, harmony, and tender affection, which is the only foundation upon which our invaluable privileges can rest with any security, or our public measures be pursued with the least prospect of success.

We also recommend that a strict and inviolable regard be paid to the wise and judicious councils of the late American Congress, and particularly considering that the experience of almost every day points out to us the danger arising from the collection and movements of bodies of men, who, notwithstanding, we willingly hope would promote the common cause and serve the interest of their country, yet are in danger of pursuing a track which may cross the general plan, and so disconcert those public measures which we view as of the greatest importance.

We must, in the most express and urgent terms, recommend it that there may be no movements of this nature, but by the direction of the Committees of the respective Towns or Counties; and those Committees, at the same time, advising with this Congress or with the Committee of Safety in the recess of Congress, where the exigency of the case is not plainly too pressing to leave room for such advice.

We further recommend that the most industrious attention be paid to the cultivation of Lands and American Manufacture, in their various branches, especially the Linen and Woolen ; and that the husbandry might be particularly managed with a view thereto — accordingly that the Farmer raise Flax and increase his flock of sheep to the extent of his ability.

We further recommend a serious and steady regard to the rules of temperance, sobriety and righteousness, and that those Laws which have heretofore been our security and defense from the hand of violence may still answer all their former valuable purposes, though persons of vicious and corrupt minds would willingly take advantage from our present situation.

In a word, we seriously and earnestly recommend the practice of that pure and undefiled religion which embalmed the memory of our pious ancestors, as that alone upon which we can build a solid hope and confidence in the Divine protection and favor, without whose blessing all the measures of safety we have or can propose will end in our shame and disappointment.”
MATTHEW THORNTON

Dr. Matthew Thornton Signature
On the Declaration of Independence

From this time on, the members of the Congress virtually ignored the remnant of the royal government in Portsmouth, and they assumed the real authority for running the province. During this difficult period of transition from royal to provincial government, Dr. Thornton was the acknowledged leader of the government, acting as chairman of the Committee of Safety throughout the rest of 1775.

Dr. Thornton was asked to draft a plan of government for the colony, after dissolution of the royal government. He headed the five-man committee that drafted New Hampshire’s Constitution, and upon its adoption on January 5, 1776, New Hampshire became the first of the original thirteen states to create a government independent of Britain.

In 1776, Thornton was elected the first Speaker of the New Hampshire House of Representatives, then became a member of the council, and was appointed as a Superior Court Justice. He also continued to serve on various committees of the legislature and the Committee of Safety.

Nearly eighteen months prior to his arrival in Philadelphia, Matthew Thornton had written a letter to Congress advocating complete independence from Great Britain. This was a view that was not universally supported at the time. However, by November 1776, it was the almost unanimous viewpoint of the activists in the Colonies.

Thornton was an active member of the Continental Congress from November 1776 through 1777. He was selected to attend Congress again, but declined to attend due to poor health. For the rest of his life, Thornton attended to State duties. From 1776 until 1782, he served as Chief Justice of the Court of Common Pleas – the superior court of New Hampshire.

The pressure of his many duties forced Thornton to end his medical practice in 1779. He served six years on the Superior Court and as Chief Justice of the Court of Common Pleas, but in 1782 declined reappointment to those posts.

In 1780, he moved to Merrimack, New Hampshire, where he purchased the confiscated estate of Loyalist Edward Goldstone Lutwyche. While in his seventies, from 1784 – 1787, Thornton was a member of the New Hampshire State Senate, and from 1785 – 1786, a State Councilor.

Hannah Jack Thornton died on December 5, 1786, at the age of 44, and is buried in Thornton’s Cemetery, Merrimack, NH. 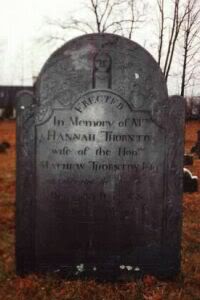 With the death of his wife in 1786 and of his son in the following year, and with increasing infirmities, Thornton retired to his farm and wrote political articles for the newspapers, even after the age of eighty. Surrounded by his family and friends, he passed the remainder of his days in dignified repose. He became a gentleman farmer, and operated the ferry on the Merrimack River still known as Thornton’s Ferry.

Dr. Matthew Thornton died June 24, 1803, at the age of eighty-nine years, while visiting at the home of his daughter, Mrs. Hannah Thornton McGaw, in Newburyport, MA. His remains were brought back to Merrimack, and he was interred in the little burial ground at Thornton’s Ferry, with only a modest tombstone to mark his resting place, with the inscription: “An honest man.” Hannah is also buried there. 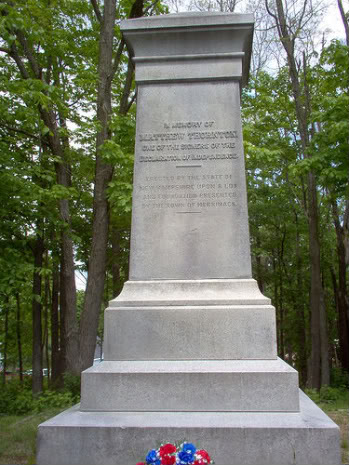 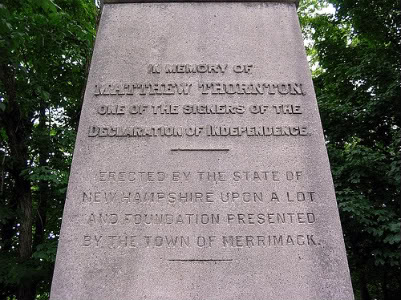 Close-up of Monument
On August 28, 1885, an act of the legislature authorized the erection of a suitable monument to his memory, upon a site selected and donated by the town. On September 29, 1892, this monument was dedicated with appropriate ceremonies, the Hon. William T. Parker being president and Hon. Charles H. Burns the orator of the day.