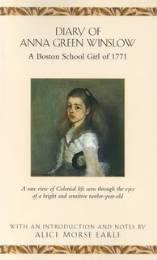 Diarist and School Girl Before the Revolution

Anna Green Winslow was born November 29, 1759, at Halifax, Nova Scotia. Anna came from a long line of prestigious, upper-class British colonists. When the weary Pilgrims stopped at Cape Cod – before they made their memorable landing at Plymouth Rock – a young girl jumped on shore, and was the first Englishwoman to set foot on the soil of New England. Her name was Mary Chilton; she later married John Winslow. Anna Green Winslow was Mary Chilton’s descendant in the sixth generation.

Anna’s father, Joshua Winslow, was but eighteen years of age when he began his career as a soldier. In 1745, he was appointed Commissary-General of the British forces in Nova Scotia. Upon his return to New England, he married his cousin, Anna Green, on January 3, 1759. Their daughter, Anna Green Winslow, was born there, and they subsequently had two sons, neither of whom survived childhood.

In 1771, at age eleven, Anna was sent to Boston to attend finishing school. A diarist, schoolgirl, and self-proclaimed “daughter of liberty,” she lived in Boston – her parents’ hometown – between 1771 and 1773, and kept a diary. Her accounts of education, social events, reading, and daily work provide a picture of life in Boston for a young girl just prior to the American Revolution.

While in Boston, Anna lived with her aunt and uncle, Sarah and John Deming, and was surrounded by other aunts and uncles in a large extended family. It was fairly typical for a young, upper-middle-class woman to be sent away to school, and it was also common for a “gentlewoman” such as Winslow’s Aunt Deming to take in schoolgirls as boarders in order to earn some extra income.

Anna’s parents wanted her to be educated like other young women of her class. She learned the arts considered most useful to women of her class – dancing and penmanship – while developing social connections that gave her opportunities to meet eligible young men. In contrast to Loyalist and conservative Nova Scotia, Boston was liberal and pro-rebellion.

At her aunt’s suggestion, Anna recorded the details of her life in a diary from November 1771 to May 1773. The diary covers seventy-two pages of paper, about eight inches long by six and a half inches wide. The writing is uniform in size, every letter is perfectly formed; it is as legible as print, and in the entire diary but three blots can be seen, and these are very small. The sheets are sewn into a little book, on which a marbled paper cover has been placed.

During the eighteenth century, diaries were often shared with family members and friends. Anna’s aunt seems to have read her diary regularly and recommended what Anna should write about and what she should omit. In addition, her parents responded to her diary in their letters.

Throughout the diary, Anna mentioned her readers, sometimes writing a passage that she hoped her mother would not show to her father, and sometimes mentioning that her father didn’t respond to her remarks, no matter what she wrote. When he finally did read her journal and wrote that he “approved some part of them,” Anna recorded her happiness. While she almost always seemed to be cheerful, even when she was sick or recording sad events, she occasionally mentioned her homesickness.

Although Anna was exempted from some of the harsh work that rural and poor women did, she was expected to participate in the running of the household. Anna was industrious in all housewifely duties, and attentive to her lessons. She could make pies, and fine network; she could knit lace, and spin linen thread and woolen yarn; she could make purses, and embroider pocket-books, and weave watch strings, and piece patchwork.

When she was twelve years old, Anna came out, and went to a succession of parties, which she called constitutions, where girls only were invited. In her diary, she painted a picture of rows of demure little girls of Boston Brahmin blood soberly walking and curtsying through the minuet.

Anna’s diary rarely mentioned politics directly, but she did record sermon notes that include veiled references to rebellion. It is clear that she had ambivalent feelings about the differing attitudes of Bostonians and Nova Scotians.

Joshua Winslow remained in Nova Scotia until 1773, when he reunited his family in Marshfield, Massachusetts, in a house later occupied by Daniel Webster. By 1775, notions of liberty filled the heads of many Massachusetts men and women; and soon the Revolution became more than a dream.

Joshua Winslow, with many of his Marshfield neighbors, sided with the British, and his Loyalist sympathies caused his exile from the colonies. His family, including Anna, remained behind. After some time in England, he became paymaster general for the British forces in Quebec, a job he held for the remainder of his life.

Joshua was separated from his wife and daughter for about eight years, and a journal kept by Anna’s mother in Marshfield, Massachusetts includes some information on her daughter’s daily life and her health. Anna was not always well; she had severe colds and was feverish.

There are few records of how Anna Green Winslow spent the rest of her life after she stopped keeping her diary in 1773. A journal written by her mother during their life in Marshfield is filled chiefly with sermon notes and religious thoughts, and sad and anxious reflections over absent loved ones, one of whom was her husband.

Anna Green Winslow died of tuberculosis at Hingham, Massachusetts, on July 19, 1780, at twenty years of age, while her father was still far away. There is no known grave or headstone to mark her last resting place.

In 1783, Mrs. Winslow finally joined her husband in Quebec.