Skip to content
History of American Women > Women and the gardren > The Garden in a Nunnery, Part 2: Radegund of Poitiers 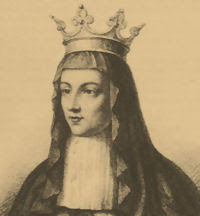 Radegund of Poitiers, France
Radegund of Poitiers was one of the first Frankish women who founded and ruled over nunneries in France. Her life reads like a soap opera. Born around the year of 520, Radegund was the daughter of a Thuringian King, Berthaire. While just a child, her father was murdered by his brother, Hermanfred, who took Radegund and her brother to raise as his own. But in 531 the Franks invaded Thuringia and defeated and destroyed the Thuringian royal family. The children were captured by the invading Frankish King Clothaire I, who claimed them as spoils of war. Radegund lived with Clothaire in Athies when at the age of 18 he moved her to Soissons to be his queen. She did not want to marry this brute Clothaire but eventually consented to marry him in 540, while apparently goading the man to fury with her austere and devout way of life. She used her revenues from land she received from her wedding to found hospices and was involved in much charitable work on behalf of the poor.

Ten years later, Clothaire murdered Radegund’s brother, the last surviving male of the royal family. Radegund fled Clothaire’s court, went to Noyon where she managed to be consecrated as a deaconess and eventually made her way to Poitiers. Clothaire tried many times to reclaim his devout wife but failed as now she had the power of the church behind her. In 561 Clothaire died, releasing Radegund from any claims.
During these years Radegund founded the Convent of Our Lady of Poitiers. She laid down the Caesarian Rule in the convent which is that once cloistered, a nun can never ever leave the convent. She further stipulated that the sisters must be able to read and write in addition to the other female tasks of weaving and needlework.
She must have been a powerful woman or perhaps one with a gilded tongue as next she petitioned the Byzantine Emperor for relics from the Holy Land to sanctify her convent. Over time she received the little finger belonging to St. Mamas of Caesarea and a fragment of the True Cross, a large piece of wood from the cross upon which Jesus was crucified. Radegund renamed the convent the Abbey of the Holy Cross, and it became a destination of pilgrimages throughout Frankish lands. Having accomplished so much Radegund removed herself from the day to day goings-on in the convent, and isolated herself in a walled-up cell where she devoted herself to prayer and meditation. She died on August 13, 587.

Now what does she have to do with gardens or flowers? Well Radegund loved to decorate the church altar with flowers, and ‘a profusion’ of flowers at that. A great friend of hers was the poet Venantius Fortunatus and he wrote many flowery poems of love to her. He claimed that at one dinner he shared with Radegund at the convent, the table was barely visible as it was strewn with roses, greenery, and flowers.

Violets were sent along with this poem to Radegund:

‘If the time of year had given me white lilies,
or had offered me roses laden with perfume,
I had culled them as usual in the open or in the ground of my small garden,
and had sent them, small gifts to great ladies.
But since I am short of the first and wanting in the second,
he who offers violets must in love be held to bring roses.
Among the odorous herbs which I send,
these purple violets have a nobleness of their own.
They shine tinted with purple which is regal,
and unite in their petals both perfume and beauty.
What they represent may you both exemplify,
that by association a transient gift may gain lasting worth.’