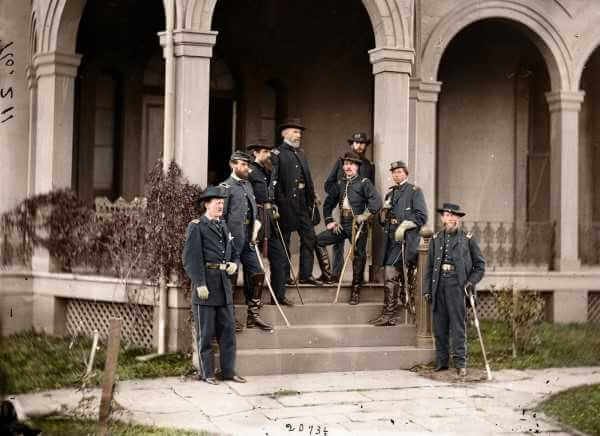 Early Years and Marriage
Hannah Wickersham Forster was born January 31, 1804 in Erie, Pennsylvania. Edwin Vose Sumner was born in Boston, Massachusetts January 30, 1797 and entered the United States army as a career soldier in 1819. He fought in the Black Hawk War (1832) and various campaigns against Native Americans, and with distinction in the Mexican-American War (1846-1848).

The Sumners lived in various outposts over the coming years. Edwin served at Fort Atkinson, Iowa Territory from 1842 until 1845. During the Mexican-American War, Sumner was praised for his bravery at the Battle of Cerro Gordo and given the rank of lieutenant colonel. He also earned the nickname “Bull Head” there – a tale was told that a musket ball had bounced off Sumner’s head during the battle. He served as the military governor of the New Mexico Territory from 1851-1853 and was promoted to colonel of the 1st United States Cavalry on March 3, 1855.

Bleeding Kansas is a term coined by Horace Greeley, editor of the New York Tribune, which refers to a series of violent confrontations between abolitionist and pro-slavery forces during the years 1854 through 1861. At the heart of the conflict was the question of whether Kansas would enter the Union as a slave state or a free state.

The Kansas-Nebraska Act (1854) – drafted by Democratic Senator Stephen A. Douglas [link] of Illinois and President Franklin Pierce – created the territories of Kansas and Nebraska. The initial purpose of the Act was to open up thousands of new farms. The popular sovereignty clause in the Act allowed the settlers of the territories to decide the slavery question without interference from Congress.

Pro-slavery forces declared that every settler had the right to bring his own property, including slaves, into the territory. The anti-slavery contingent feared that the rich slaveholders would buy up all the good farmland and run it with slave labor.

In 1855, Colonel Edwin Vose Sumner accepted the command of the newly-formed U.S. First Cavalry at Fort Leavenworth, Kansas. His regiment tried to maintain peace during the Bleeding Kansas crisis.

Sumner received an order directly from the President Franklin Pierce [link] telling him to quell unrest in Topeka, Kansas caused by the Freesoil convention being held in that city. On July 4, 1856, Sumner rode at the head of a column of 200 men from the First Cavalry, which took a position in front of the convention hall and unlimbered their artillery. The crowd dispersed. In 1861, after the Confederate states had seceded, Kansas finally became a state.

At the outbreak of the Civil War, Sumner had just been promoted to brigadier general. On March 12, 1861, recently inaugurated President Abraham Lincoln [link] appointed Sumner to replace General Albert Sidney Johnston [link] as commander of the Department of the Pacific in California. When Sumner left for California, his son-in-law Armistead Lindsay Long resigned his commission in the United States army and enlisted with the Confederate States of America, eventually becoming Robert E. Lee [link]’s military secretary.

In the autumn of 1861, Sumner was sent East to command a corps in the Army of the Potomac organized by General George B. McClellan [link]. President Lincoln selected Sumner as one of four corps commanders, based on his seniority. The II Corps gained a reputation as one of the best in the Union Army; it was later commanded by Darius Couch [link], Winfield Scott Hancock [link], and Andrew A. Humphreys [link]. Sumner earned the nicknames “Bull” and “Bull Head” came both from his great booming voice and a tale that a musket ball once bounced off his head.

Sumner – well over sixty years old – was by far the oldest general in the Army of the Potomac. He was wounded during Peninsula Campaign (March through July 1862) and was promoted to the rank of major general soon after. Sumner was again wounded in the battle of Antietam. Sumner led his division during the Seven Days Battles (June 25 – July 1, 1862) and the Maryland Campaign (September 4–20, 1862).

General McClellan was relieved of his command after he failed to pursue General Robert E. Lee’s retreat after the Battle of Antietam, and General Ambrose Burnside was assigned to command the Army of the Potomac on November 7, 1862. Burnside grouped the corps in “grand divisions” and appointed General E.V. Sumner to command the right grand division.

Burnside delayed his plan to attack General Lee at Fredericksburg, Virginia (December 11-15, 1862) until the arrival of pontoon bridges, which his troops would use to cross the Rappahannock River. This allowed the Confederates to concentrate and heavily entrench their troops along Marye’s Heights above the town.

On December 13, 1862, Burnside ordered Sumner to attempt a frontal assault against General James Longstreet [link]’s strongly fortified lines on the high land above Fredericksburg called Marye’s Heights. Sumner’s troops moved forward shortly before noon; they had to cross about half a mile of open ground before approaching a stone wall, behind which Longstreet’s men had entrenched, with artillery on the heights behind them.

After two hours of bloody fighting, four Federal divisions suffered nearly a fifty percent casualty rate while failing to dislodge the Rebel defenders. Attacks continued through the afternoon, but Union efforts were repulsed with heavy losses. The II Corps lost an estimated four thousand men. Burnside’s critics called him the “Butcher of Fredericksburg.”

Due to General Burnside’s continued failures in the following weeks, the president replaced him with General Joseph Hooker [link] as commander of the Army of the Potomac on January 26, 1863.

General Sumner asked to be relieved of his command shortly after Hooker’s appointment due to his frustration with quarreling among the Union officers and a nagging exhaustion he could not shake.

Sumner was reassigned to a new command in the Department of the Missouri, effective in the spring. He traveled to his daughter’s home in Syracuse, New York to rest. While there, he suffered a heart attack and died suddenly on March 21, 1863.

Hannah Forster Sumner lived on until December 9, 1880, when she died in Charlottesville, Virginia.